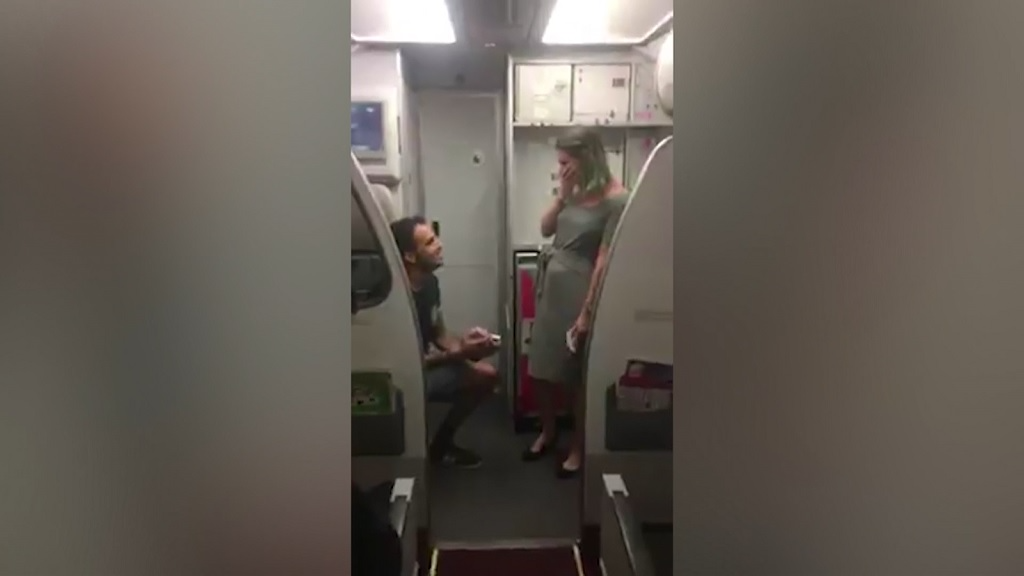 A romantic boyfriend has proposed to his partner on her birthday at 20,000 feet in the air.

Mark Wadson, 30, asked another passenger to film the moment he asked his now fiancé, Miranda Naprelac, 22, to marry him.

A flight attendant can be seen calling Miranda to the front of the plane to wish her a happy birthday.

But this was a decoy, Mark had planned it out perfectly and with hundreds of people looking at the pair, he got down on one knee and popped the question.

Miranda can been seen in complete shock as she says 'yes' and kneels down to kiss her new fiancé.

The pair who got engaged on January 2 haven’t stopped smiling since and are currently enjoying a holiday in Bali, Indonesia.

Mark, a store manager from Perth, Sydney, said: "Me and the flight attendants organised that I would go to the bathroom and they would call her to the front and sing her happy birthday.

"They then asked her who she was travelling with and I would appear from the bathroom and proceed with asking Miranda to marry me.

"She was so shocked but we've both been happier than ever since it all happened.

"We always knew our connection was something more than anything we had felt before and we firmly believe that this was and is the true definition of soulmates.

"We are so happy to have the opportunity to share our love and story."