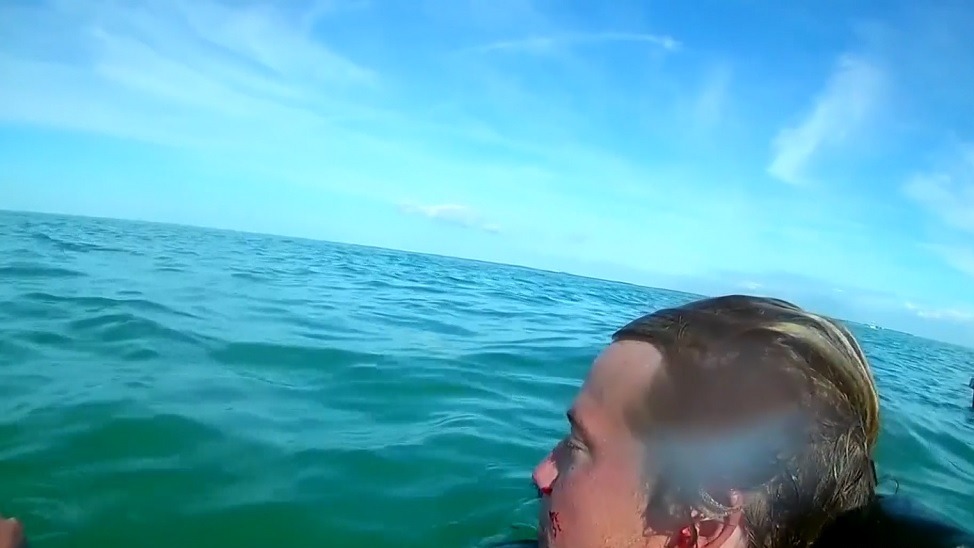 This is the moment a man is rescued by a stranger after suffering a terrible high-speed jet ski crash.

The video, captured on December 3 last year, shows a jet skier enjoying a ride off the coast of Tampa, Florida, when suddenly he sees a man jumping out of the water and falling dangerously off his jet ski at speed and from a height.

The witness then swims towards the injured man, who is floating unconscious facedown in the water, and turns him around to stop him from drowning.

''I got you, I got you bro!'' says the rescuer to the injured man, who has a nasty-looking gash under his chin.

"All of a sudden another jet skier appears - who happens to be a friend of the man that had the accident - and helps the injured man to get on his jet ski before taking him safely to the beach."

''I got the great idea to play on the waves from a passing massive cargo ship. Needless to say, I was in the right place at the right time to help.'

''He was unconscious for a few minutes and would have surely drowned."

''Just 10 minutes before this I was riding near a large bull shark and over the day we had spotted many sharks swimming. ... Yes, it crossed my mind that I was in the water with someone bleeding.''

''He was later transported by his friend to the beach where paramedics transported him to the hospital.''

''I have been in touch with him since the accident and he is thankfully recovering well.''