Watch: Swarm of bees cluster around car in Trinidad 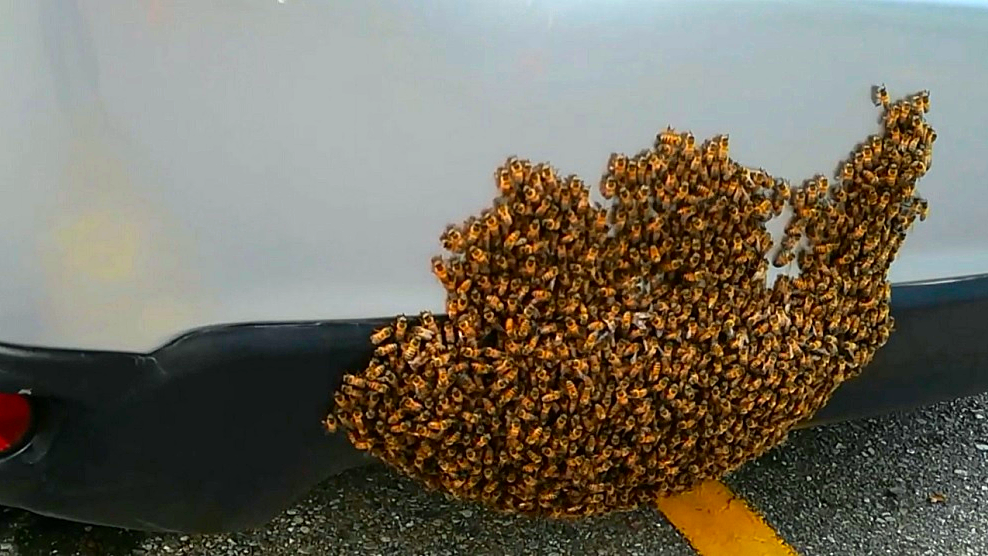 Onlookers in Port of Spain, Trinidad, were shocked to see a swarm of bees clustered inside the exhaust of a car parked near Maraval Road.

The swarm was spotted on Thursday afternoon by the owner of the vehicle, who warned onlookers to keep their distance.

Luckily, a beekeeper had been called to safely move the hive.

It is suspected that the queen may have become trapped in the exhaust, leading the hive to swarm around it in order to protect her.

According to a report by the Washington Post, when a colony gets big enough, it splits in two and the queen bee flies off, usually taking a third to a half of the colony with her, in search of a new home. (Back at the home base, a new queen will take her place and continue on with the old colony.)

Additionally, swarming bees are still en route to a new home, meaning they have no nest and no stores of honey to defend, and they tend to be at their most docile.

Several other instances of bees swarming around vehicles have been reported in other countries.

Bees, which provide a critical role in pollinating crops, are dwindling in numbers worldwide. One suspected reason is colony collapse disorder, which occurs when the majority of worker bees in a colony disappear and leave behind a queen, plenty of food and a few nurse bees to care for the remaining immature bees.

If you spot a bee swarm near you and wish to remove it, contact the Bee Keepers' Association or call 470-5436. Alternative, you can call the Zoological Society of Trinidad and Tobago on 622-5344.

UPDATE: Man dies after being stung by bees