Watch: Thai toddler killed when school wall falls on her during storms 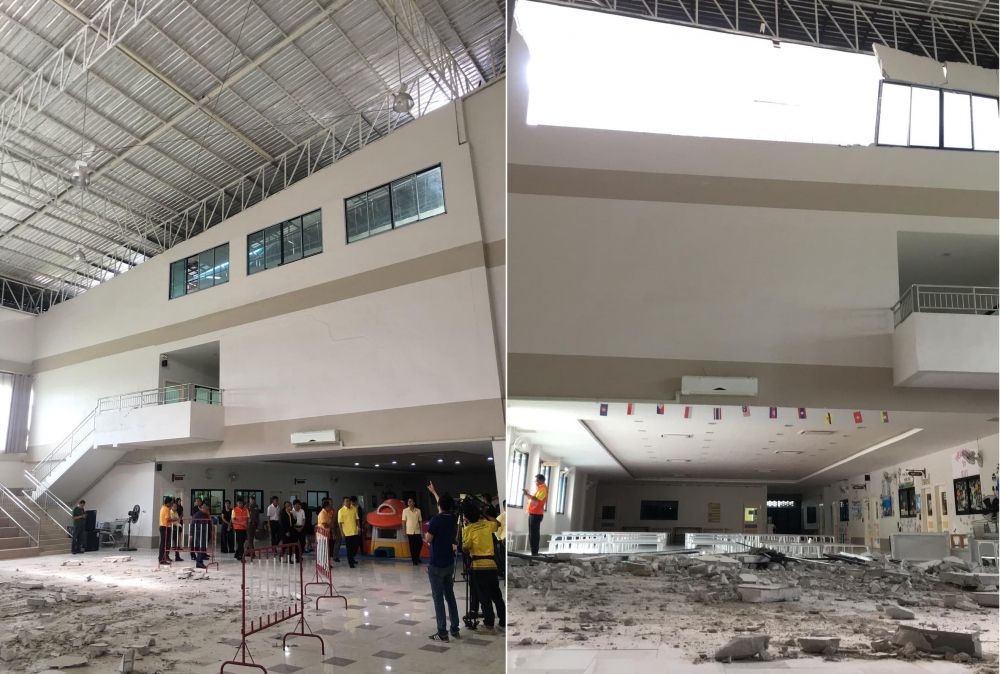 A four-year-old Thailand girl was crushed to death after a 26ft high school wall collapsed on her as she waited for killer tropical storms to pass before going home.

Suchada Surasa was with three other kindergarten pupils and their parents in the atrium at the private school in Khon Kaen, northeastern Thailand, on Monday afternoon as wind and rain battered the building.

But as they sheltered from the storm, a section of the wall above the youngsters suddenly gave way.

Large pieces of concrete landed on Suchada killing her instantly and injuring two other pupils and two adults, including her father.

Footage shows the aftermath with concrete rubble and iron girders littered across the floor after the storms battered the building.

Suchada’s devastated father, Paisal, 37, said he had gone to pick up his daughter from the school, where she had just start studying two weeks ago.

He said: "This was the first rainfall that Khon Kaen people had long waited for, but I lost my little girl forever that day.’’

Paisal said his wife was ‘’still in shock’’ after their only child died and they buried her at a funeral on Tuesday.

He added: ‘’It happened so fast. We were walking to the other side of hall when it all went black for a few moments as I felt something crashing down on me and I fell. I opened my eyes and saw my daughter crushed under debris.’’

Officials are now investigating the incident amid claims that the design of the building had "deviated" from its original plans.

Khon Kaen Governor Somsak Jangtrakul said an initial survey of the scene after the collapse found the building construction failed to precisely follow the approved plan.

He said: ‘’The part where the concrete wall and ceiling fell should have been a solid wall according to the plan, but it was installed with glass windows.’’

Jangtrakul said that a team from the Public Works and Town and Country Planning Office would now conduct a detailed inspection of the building.

The school apologised to the family of the girl but denied that the building had not followed original plans.

Tropical storms have battered large parts of northern Thailand since Saturday, with up to 10,000 homes damaged.

In neighbouring Chiang Mai, a 59-year-old woman died after a storm caused a large tree to fall onto her family’s car.

Experts believe the heat wave and freak storms have been caused by the El Nino phenomenon, which has lead to a heat wave and temperatures passing 40C across Thailand.

Seree Supratid, director of the Climate Change and Disaster Center at Rangsit University in Bangkok, said: ‘It’s about 30 to 40 percent hotter this year because of El Nino. Years with the El Nino phenomenon are hotter than usual.’’