Watch: Two Macajuel snakes rescued in one week in Trinidad 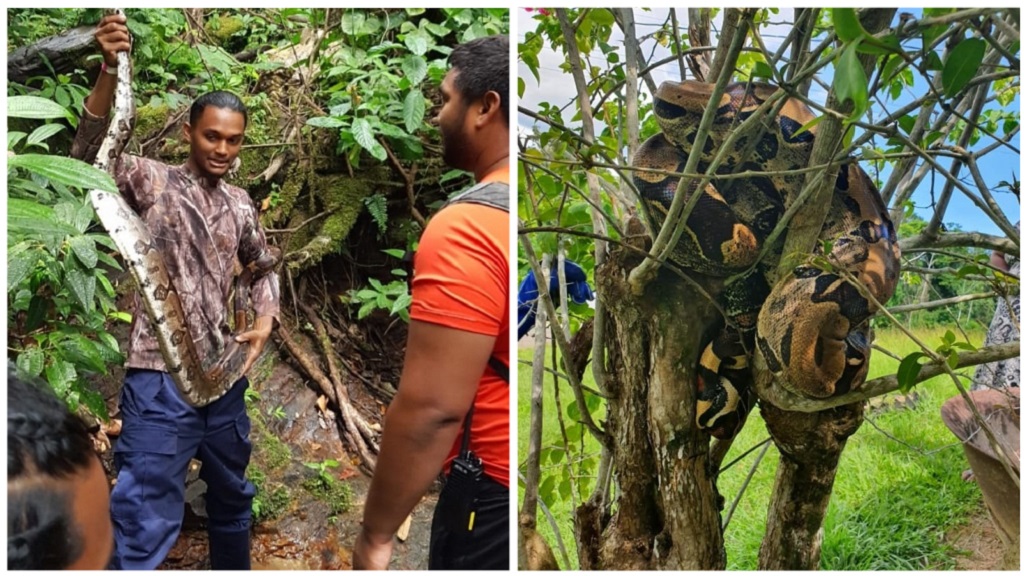 Two Macajuel snakes were rescued and relocated in different parts of Trinidad, and their rescuers are being applauded for preserving biodiversity.

Macajuel snakes are boa constrictors and are not venomous snakes.

Minister of Agriculture, Lands and Fisheries, Clarence Rambharat, shared a photo of a seven-foot-long Macajuel which was rescued from a resident's yard in Rousillac earlier this week.

"Thanks to the resident of Pableto Trace Grant's Road Rousillac who discovered this seven-foot-long Macajuel on a tree outside her home and contacted the Forestry Division to have the reptile relocated. Game Warden Seepersad responded, and relocated the Macajuel," Rambharat said.

In an unrelated incident, another Macajuel was rescued from Aranguez Main Road and relocated to a safe spot in the Aripo mountains.

Hiking enthusiast Sion Santo told Loop News that the Macajuel, which measured almost eight feet in length, was incredibly calm and was not at all aggressive.

The snake was rescued by his father and then relocated over the weekend.

"We found it crossing the Aranguez Main Road, it was unsafe for the snake to be there as it could have been crushed or killed. When my dad saw it he decided to move it from there and then he cared for it and wanted to relocate it, but he didn't know where to release it," Santo said.

Santo, a 22-year-old electrical technician, said he recently got into hiking and decided on a safe location which he knew would be far from human habitation and would be a safe place for the snake to be released.

Santo said he was amazed at how docile the snake was.

"When I released it I felt kind of sad. sad, I held him like a baby. He didn't tighten up or act aggressively in any way. Normally they would try to squeeze but he didn’t, he was relaxed. I was shocked,” he said.

He said as they released the snake they saw it move slowly upstream and into the bushes.

“There were many things going through my head. Would he turn back or chase us? As I let him go he just swam up the stream and came out near some rocks and then disappeared."

Santo said unless a snake is venomous and poses a clear danger to humans, there's no need to kill the animals needlessly as they are critical for the environment.

“I’ve seen plenty of times when people see snakes and they kill it. Why kill it? There are times when snakes are eating chickens and they would call us and we’d relocate it."

“Unless it’s a venomous snake that poses a threat, like a mapepire, it’s easy to relocate them.”

“If you encounter a snake don’t panic, just remain calm and assess the situation. If you can, determine what type of snake it is then you’ll know how to deal with the situation, and contact a professional to assist you."

Santo said he grew to love animals after watching his father.

“He’s always loved animals, and I got it from him. Since I was in primary school I’ve been around animals and we’ve always learned to care for them."

"When I was little we had a piece of land with ponds and we knew there were caimans in it, so we were told to stay away and be cautious. One day we saw them come out and I saw my dad move across to the middle of the pond, and he just moved his hand and picked it up, I was shocked, and since then I was like, I want to be like that,” he said.

“From small we’ve been dealing with animals and we’ve always loved animals," he said.

If you spot a snake or caiman on your premises, please contact any of these NGOs to have them safely relocated: