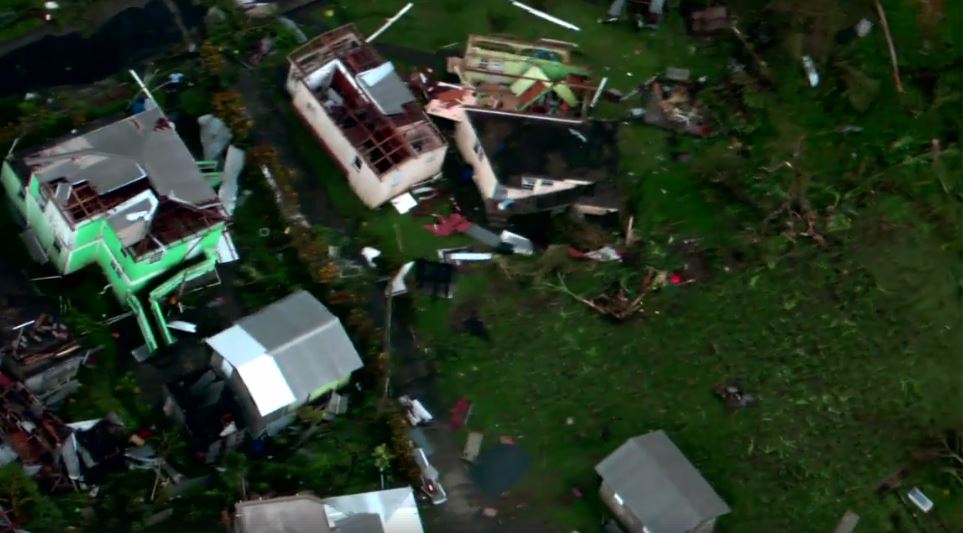 Three days after Category Five Hurricane Maria passed directly over the island, Dominica’s main focus is search and rescue of persons across the island and getting much-needed supplies to them.

This was according to Dominica’s Prime Minister Roosevelt Skerrit, who said no part of the island was spared from Maria’s wrath.

Speaking in a live television interview on the ABS network in Antigua, PM Skerrit said 15 people had already been buried and some 20 reported missing so far, with the death toll expected to rise as authorities continue to navigate the rugged terrain to make contact with communities around the island.

Some of the areas where deaths have been recorded were Pointe Michel, Grand Bay, Delices, Marigot, and Dos d’Ane.

“Because of the health concern, residents have taken the responsibility to bury the dead,” he explained.

As for the survivors, Skerrit said people are in desperate need of supplies, as much of what was stockpiled was also damaged in the storm.

“A lot of communities are without drinking water and basic food items, so we are trying to today to get those items to them as quickly as possible,” he said, also noting that tarpaulins, blankets and baby supplies were needed urgently.

He added that helicopter services will be critical to airlift supplies to isolated communities in large quantities.

Skerrit highlighted that many people, including children, have been traumatised by the experience.

Recounting what people told him they went through during the hurricane, he said, “People were just exposed to the elements of the hurricane – nowhere to run, nowhere to hide; hiding in their cupboards cramping themselves in the kitchen cupboards to survive.”

The PM himself was not unscathed, as his roof was blown off and his house flooded. He shared that he took cover from the falling roof under a mattress.

He said the darkness made the experience even more terrifying. “The speed of the winds, you were hearing the sounds, you were hearing things moving around you, but… it’s pitch dark – no electricity – so you do not know what’s happening. That was the most traumatising part of it – things were happening to you and to your neighbours and you could not see.”

“Many people are in shelters, some are with neighbours with the few homes that would have survived, but there are many who do not know where to sleep at night.”

He said telecommunications providers are working feverishly to get services back online and the authorities are checking the water system to determine how soon they can restore the supply.

But it will be a long time before Dominica is back to 'normal'. In fact, it was hinted that Maria will most likely change the face of Dominica, as the PM said some villages might have to be abandoned and persons resettled elsewhere on the island.

Giving an overview of the state the country was in this afternoon, Skerrit said:

“Private homes have been damaged, some beyond any form of repair – all flat on their faces. Many of our schools have been destroyed. Our main hospital is with no electricity now. They’ve been running very, very difficult operations with no generators. The generators had to be set aside because of the flooding… Nurses have been working the last 96 hours non-stop trying to provide care to the patients… Communication to many parts of the country is impossible. We will have to access villages by sea and also by helicopter.”

“It has been brutal,” he said. “Dominica is going to need all of the help the world can offer.”

Dominica PM cries for his country