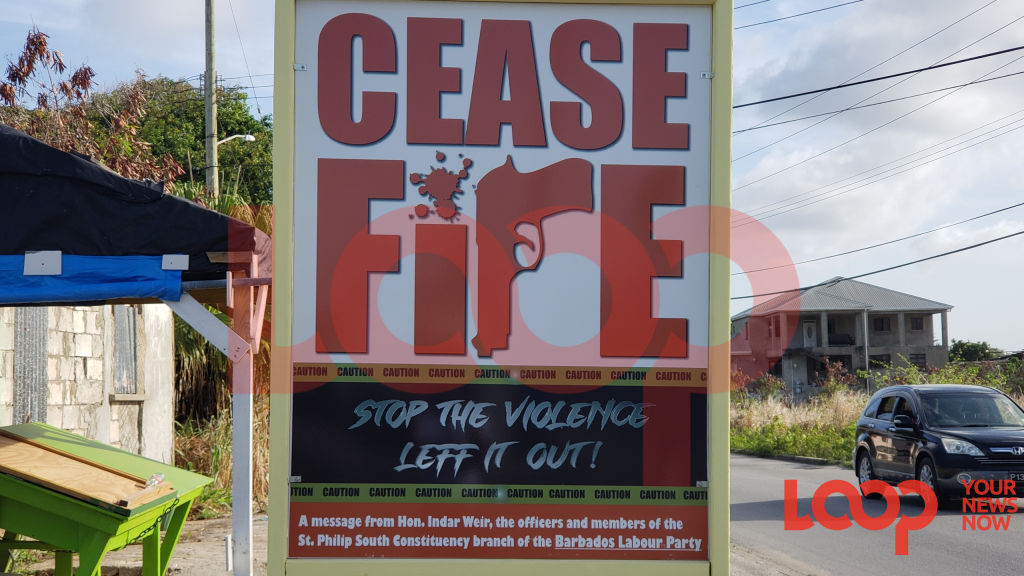 The St. Philip South Branch of the Barbados Labour Party (BLP) has erected one anti-gun violence billboard in the constituency so far, but more are to come.

St. Philip South Constituency Member of Parliament (MP) and Agriculture Minister, Indar Weir said that this is but one of their initiatives to tackle and wrestle the problem of gun violence which has St. Philip now being labelled a "hot spot" by the Royal Barbados Police Force.

"What we are trying to get across to the young people is to bring an end to violence period, but at the same time to put down the guns."

Today, Sunday, July 7, 2019, at the Nazarene Church in Ruby, the Branch, along with Weir and members of the Royal Barbados Police Force, will be on hand to answer questions and alleviate some fears when they host a Branch Meeting and Town Hall meeting, a few feet away from the first billboard location.

Weir said that the signs and Town Hall are to make sure that constituents know that work is being done.

"We want to get the residents of the area out, one, to let them know that I, as their MP, am paying attention to what is going on. We are working on their behalf to make sure that as far as possible that we can bring some comfort and assuage their concerns by letting a member of the Royal Barbados Police Force come in and address them so they won't think that nothing is being done, or [sic] that they don't have to live in fear 'cause of what is happening.

"And the sign is there so that the message can get across, but also to let the people know that I care and that I'm paying attention and something is actually being done about it."

Responding to a question about the sign location and placement across from the Hilda Skeene Primary School in Ruby, near the four-crossing which has been the center point of at least three homicides for 2019 - two involving guns and one involving a knife - Weir said:

"Ideally it is located there because that area was one of the 'hot' areas but it's going to serve multiple purposes.

"As a matter of fact, we are going to put another sign there with the message that says 'Bring an end to violence' and 'St. Philip os a Zone of Peace. Let's keep it that way!' That's the kind of message we want to get out there."

Therefore he pledged that efforts are ongoing across the entire constituency. "So you won't just see a sign there, you're going to see them right across the constituency," he promised.

This initiative is being undertaken by Weir and the St. Philip South Branch.

The billboards and the Town Hall Meeting come after exactly three months after the parish of St. Philip held a candlelight vigil at Rices Methodist Church after a double homicide in Rices, a community in St. Philip South. On that occassion at the start of April, the Minister Weir told his constituents not to be fearful - "Do not become hostages. Do not be afraid to live your lives."

The double homicide which occurred in Rices, happened on Sunday, March 17, left a mother and son dead. The shooting incident happened beside the church at their home.

UPDATE: Man found dead in a pool of blood at St. Philip home