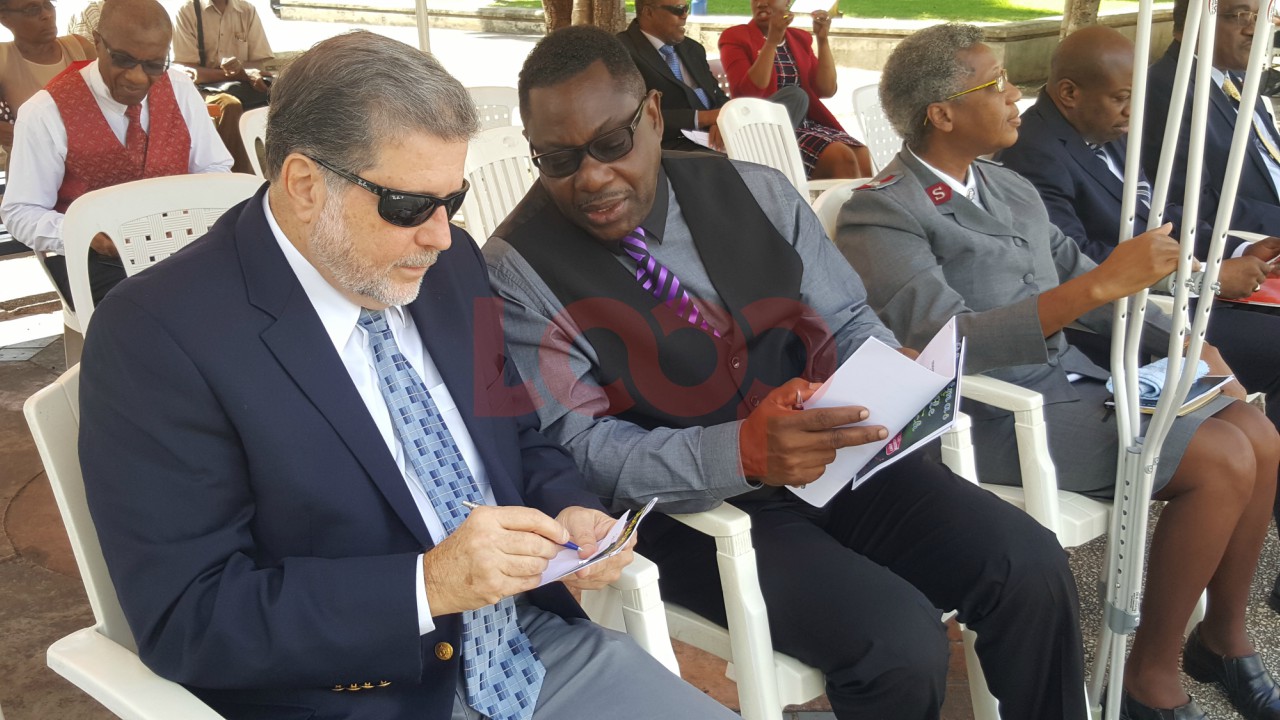 Chairman of the Advisory Board of The Salvation Army, Paul Bernstein chatting with the Minister of Social Care, Steven Blackett during the launch of the 2017 Kettle and Letter Apppeal in Jubilee Gardens today, Friday, November 10, 2017.

Persons who require assistance from the government but shun the Welfare Department because of the stigma associated with the agency, will have no fear in the future.

The move to rename the Welfare Department and the National Assistance Board will be before Cabinet soon, if the Minister of Social Care, Constituency Empowerment and Ecclesiastical Affairs Steven Blackett has his way.

Speaking to the media on the sidelines of the launch of the 2017 Salvation Army Christmas Kettle and Letter Appeal in Jubilee Gardens in Bridgetown this morning, he said:

“We are very cognizant as a government of the stigma that is attached to the Welfare Department. As we speak, I am overlooking some new legislation and some amendments to the National Assistance Act, that I will be introducing to parliament hopefully before the end of the year that will change the nomenclature of the Welfare Department to the Department of Social Services, along with National Assistance Board being changed to the Commission of Elder Affairs. That is very much on the cards.”

Insisting that the legislation is almost finalized, only awaiting a review by the Ministry of Social Care for “little tweaking and revamping”  to be returned to the Attorney General’s Chambers, he promised, “very shortly we will be coming to parliament with those amendments.”

The Minister said that this name change is not frivolous and unjustified.

Minister Blackett said that in order to gain assistance, persons must be registered to the Department and this process may have dissuaded some in the past. Of the requests being made by registered persons, he made mention of them seeking help to pay bills.

At present, as one of the principal agencies under the Ministry of Social Care, the Welfare Department has on its register “just about 4 000”. The agency is funded by about $15.8Million annually to supply to the needs of the registrants. And the Minister assured that they are “not seeing a large influx” of persons, in fact, he said, “the roll is holding steady.”

In addition to the name change, the Ministry is also continuing its efforts to wean persons who are receiving welfare grants off the assistance, to become independent through their ongoing ‘Welfare to Work Programme’. In relation to this, he said, it has “borne some success”.

Regardless, the Minister took a moment to thank The Salvation Army for its assistance in catering to the less fortunate. He said that it is "no easy task" for government to handle alone and it "necessitates contributions" from corporate Barbados and philanthropists. Therefore, he lauded the sponsors, especially those from within the banking industry, for their donations to The Salvation Army for this year's Kettle and Letter Appeal.