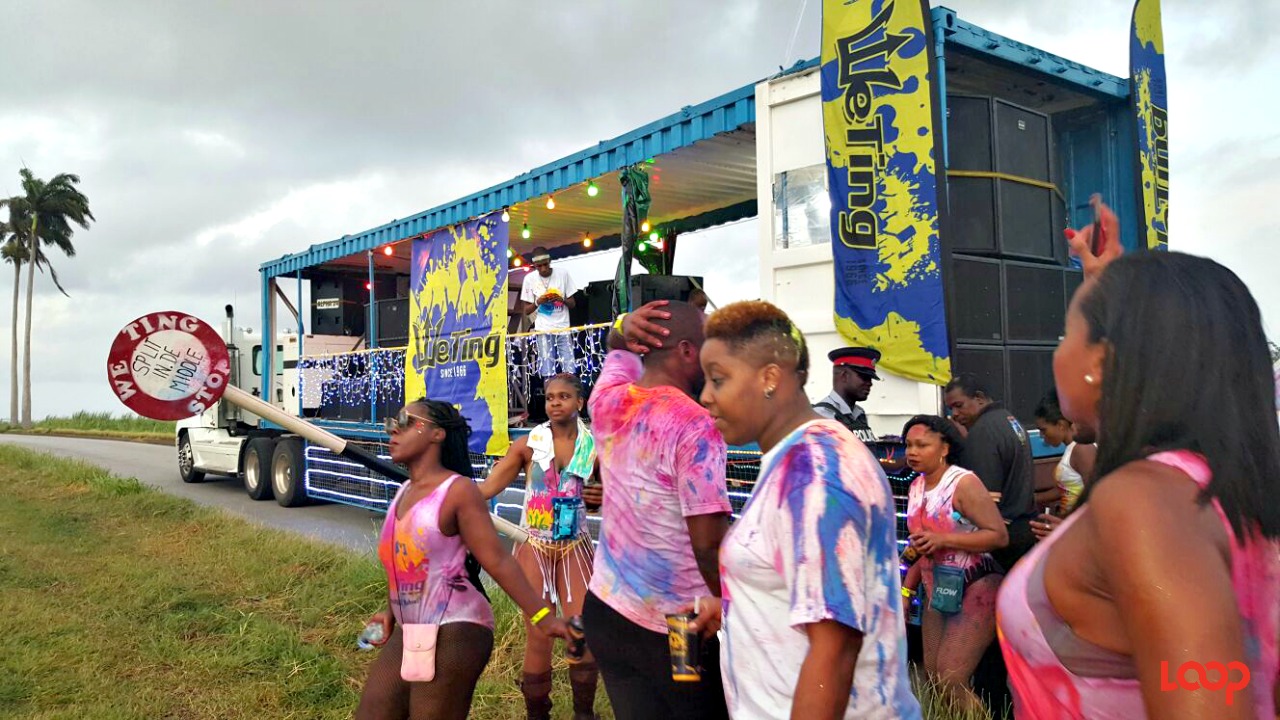 WeTing Crop Over 2017 surprised repeat revellers and amazed new revellers who all said in some form or fashion, “WeTing is pure vibes!”

So why does WeTing get a ‘V’ rating? Well, it’s a play on the letter ‘V’ and the Roman numeral ‘V’. WeTing’s route was V-shaped and five things won at WeTing CropOver2017 – the route, the vibes, the water truck, the snacks and St. Lucia’s ‘Split in de middle’!

The new route was along two roads which formed a perfect ‘V’. Patrons received the location reveal email between 10:00 pm and 11:00 pm Saturday night and then made their way to the park and ride spot – Ocean Park in Newton, Christ Church from 2:00 am Sunday, July 23, 2017.

At the start the security kept traffic flowing smoothly to a great extent and then patrons lined-up and boarded the minibuses. When the first set of minibuses landed on the scene it caused an uproar as many yelled “Waaaaait! What is this?”, “Yeaaaaah dah wuh I talking ‘bout!”, “I was expecting Transport Board buses”, and one security official ran saying “I was expecting UWI shuttles not these”. But when the minibuses got their one-night free pass from the members of the Royal Barbados Police Force and started to crank up their radios, everyone was hyped to board the buses.

The bus ride was three hard 90-degree turns, a bumpy straight and then before you could blink it was time to disembark. The bus left the Park, went in the direction of St. Patrick’s, passed the Coral Ridge cemetery and turned left at the Searles roundabout.

Two sound trucks meant that people could choose freely where and how to spend their time. At one-point the first truck, which also had a percussion band – Ground Roots, had DJs which were blazing the older soca tracks while the second truck was keeping the music selection between 2015 to 2017, but it kept switching as the morning progressed.

There was no shortage of small bags of coloured powder and many guys had bottles of paint. No one was stingy with their powder and paint as people randomly splattered and squirted colour onto each other or intentionally found friends to add colour to their life.

WeTing organisers distributed T-shirts and this year once more the females were not short on creativity as the tops were converted to leotards, rompers, jumpers, dresses and even robes. No two WeTing creations looked the same.

When Loop ran into the orange-hair songstress Nikita she said:

One reveller who had previously done both WeTing Crop Over and WeTing Independence said that this was “the best”.

“The jump is on road and not on the rocky path like last time so it’s much better. This time is well organised like especially at the start with the barricades and the lines and the minivans. I really enjoyed it this time. This the best one yet.”

Loop asked one of the WeTing Committee members if this was a bigger turnout than last July and Sonita Alexander said, “It’s about the same size.”

Police officers lined the route, led the procession and kept up the rear and they were under the command of Station Sergeant Nola Murphy. She told Loop, “It was incident-free. Some people drank too much so they could not concentrate but overall they behaved reasonably well.”

The sun rose after 5:30 am and by 7:30 am the jump had concluded and people were all about breakfast. Security tried to contain the crowd but they could not, however peace reigned in the end and each person was served eventually.

Chatting with Loop over by the area where the pre-packaged breakfast was served WeTing Committee member Ayodele Murray said that this jump was “different” and she loves that despite the rumors everybody came out to party and have a good time getting down in the paint and water. She said, “WeTing Crop Over was a good kickoff to Crop Over.”

10 Fete challenges to up de vibes