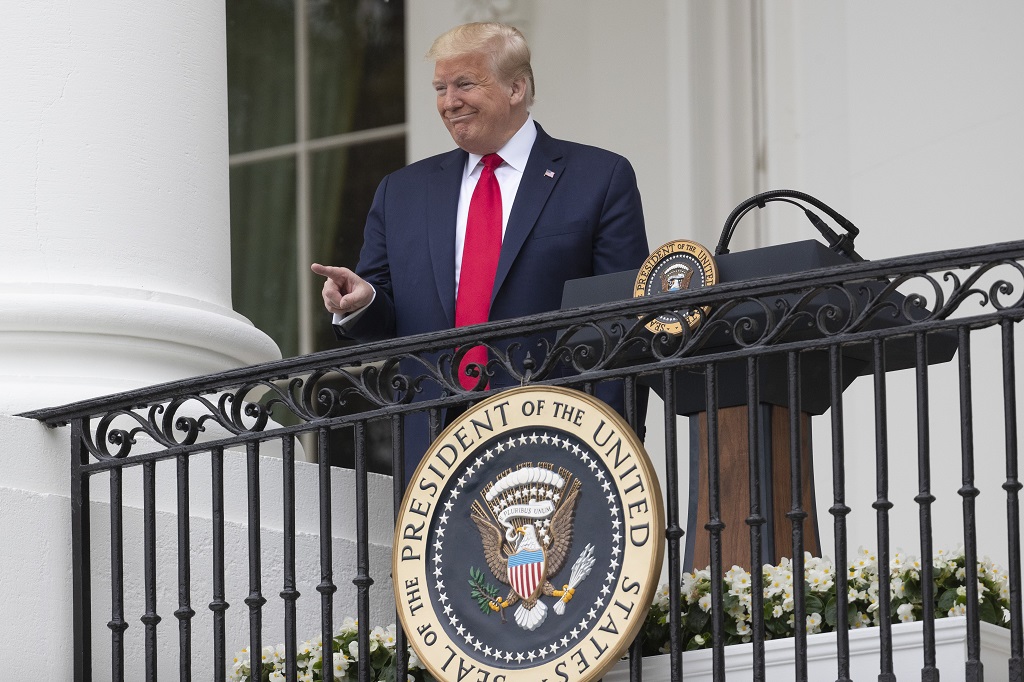 President Donald Trump points during a "Rolling to Remember Ceremony," to honor the nation's veterans and POW/MIA, from the Blue Room Balcony of the White House, Friday, May 22, 2020, in Washington. (AP Photo/Alex Brandon)

President Donald Trump on Sunday further limited travel from the world's coronavirus hotspots by denying entry to foreigners coming from Brazil, which is second to the US in the number of confirmed COVID-19 cases.

Trump had already banned certain travellers from China, Europe, the United Kingdom and Ireland and, to a lesser extent, Iran. He has not moved to ban travel from Russia, which has the world's third-highest caseload.

Trump had said last week that he was considering limiting travel from Brazil.

White House press secretary Kayleigh McEnany cast the step announced Sunday as another "decisive action to protect our country" by Trump, whose management of the crisis has come under sharp scrutiny.

The US leads the world with more than 1.6 million confirmed coronavirus cases and a death toll that is expected to surpass 100,000 later this week, according to a tally by Johns Hopkins University.

"Today's action will help ensure foreign nationals who have been in Brazil do not become a source of additional infections in our country," McEnany said.

Filipe Martins, who advises Brazilian President Jair Bolsonaro on international affairs, said the US was treating Brazil as it had other populous countries and suggested the news media were overplaying Trump's ban.

"By temporarily banning the entry of Brazilians to the US, the American government is following previously established quantitative parameters that naturally reach a country as populous as ours," Martins tweeted. "There isn't anything specifically against Brazil. Ignore the hysteria from the press."

Earlier Sunday, Robert O'Brien, the US national security adviser, had said an announcement was likely.

"We're concerned about the people of the Southern Hemisphere and certainly the people of Brazil. They're having a rough go of it," he said on CBS' "Face the Nation." He said the travel ban would likely be temporary.

"But because of the situation in Brazil, we're going to take every step necessary to protect the American people." O'Brien said.

Data from Brazil's civil aviation agency shows there has already been a sharp reduction in US-bound flights from the South American country. There were more than 700 flights from Brazil to the US in February of this year, with the number dropping to just 140 in April, two months later.

There were more than 700 flights to the US from Brazil in April 2019, the data shows.