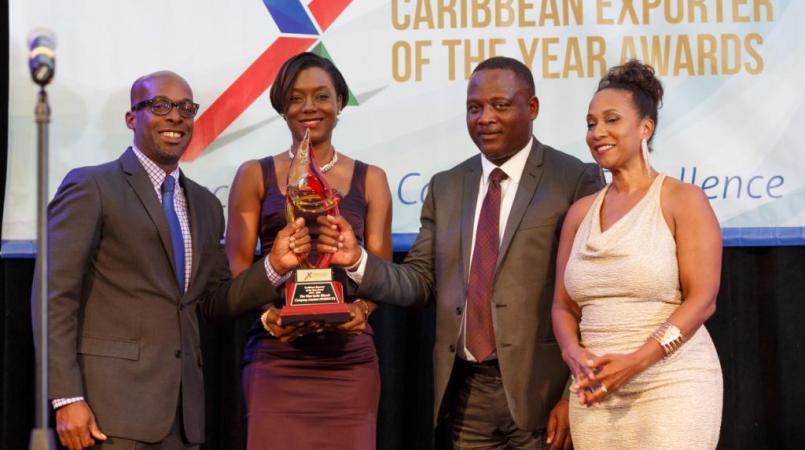 The Awards event held this year at the Hilton, Barbados Resort on the evening of December 5, 2016 hosted by the Caribbean Export Development Agency (Caribbean Export) and funded by the European Union (EU) via the 10th EDF Regional Private Sector Development Programme, aims to recognise and promote the contributions of outstanding exporters to the region’s economy.

“Our vision was that these awards would raise the profile of our SMEs in the regional and international market place, and I firmly believe that we are on the right track with this initiative.  This belief was validated in 2015, when the inaugural Caribbean Exporter of the Year, the CEO of Sacha Cosmetics, revealed that this achievement opened the doors for his company into Cuba – a market that they had previously pursued without any success” expressed Pamela Coke Hamilton, Executive Director of Caribbean Export.”

The importance of initiatives like these Awards and other projects implemented by Caribbean Export was exemplified by H.E. Ambassador Daniela Tramacere in her remarks “the European Union has invested a considerable amount of financial and technical resources in support of private sector development, particularly for export expansion. Since 2007, the EU has provided approximately EUR 138m in untied aid for trade to the 15 CARIFORUM member states, not to mention the support provided under the rum, banana and sugar programmes”.

Ambassador Tramacere is the new Head of Delegation of the EU to the Eastern Caribbean Countries, the OECS and CARICOM/CARIFORUM and went on to congratulate the award winners, highlighting that since the introduction of the CARIFORUM-EU EPA, which is central to the collaboration between the two regions, progress is being made.  Tramacere reported that “between 2009-2013 exports from the Caribbean to the EU increased by 20%.”

The event, which brought together over 100 guests saw a total of 6 awards being won. WIBISCO is a deserved winner of the Caribbean Exporter of the Year Award being a successful exporter to over 20 countries across the world and realising their motto ‘Baked in the Caribbean, Loved Everywhere’.  With a company culture of innovation and a continuous drive for excellence they have successfully introduced new techniques and equipment to increase efficiencies and output in response to the fast-paced ever-changing global marketplace.

The Female Exporter of the Year Award was sponsored by RBC Royal Bank, who have a particular interest in supporting female business owners, was won by Haitian Yve-Car Momperousse, owner of Kreyol Essence; a manufacturer of organic natural hair, skin and aromatherapy products including exotic oils, pomades, soufflés and therapeutic candles.

The Green Exporter of the Year, sponsored by Williams Industries Inc. was taken by Perishables Jamaica Ltd (PJL) for their efficient use of green technologies in the production of herbal teas that use authentic Jamaican raw materials.  From their 20-acre farm they operate on a 15Kw Photovoltaic system, which has reduced their electricity cost by 70% since installation.

SMAKS Luxury Group has been in business since 2011, and produces a range of Caribbean-flavoured teas.  In the past 3 years a new product was developed - Chai Rum, the world’s first tea-infused rum, which the company now exports to seven countries in Europe.  SMAKS took home the Emerging Exporter of the Year Award sponsored by Automotive Art in recognition of the explosion of growth witnessed since the unique product innovation.

The Special Award for Excellence in Service Export, which recognises an outstanding Caribbean firm whose primary area of business is the provision of services with global reach, was won by Nand Persaud International Communications Inc from Guyana.  An organisation that employs over 500 people has experienced an impressive 31% increase in export growth in the provision of a range of customer support services to their international clientele.

Glyn Partidge, Founder of 10 Saints Brewery Ltd, was the Agency’s Choice Award winner on the night.  10 Saints is a Barbadian micro-brewery that has leveraged several opportunities from Caribbean Export exemplifying the great drive and determination required to successfully export products and services globally.