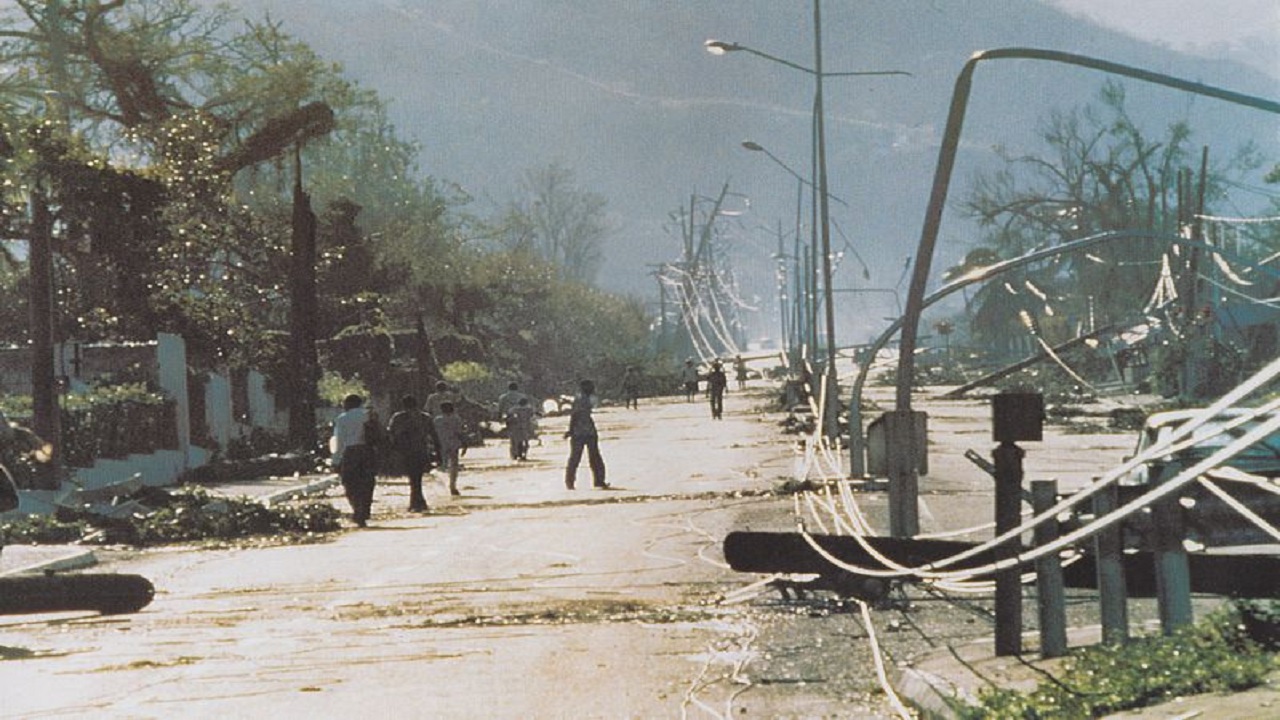 A street in Kingston in the immediate aftermath of Hurricane Gilbert.

Exactly 31 years ago, beginning at approximately 10 am on the eastern end of Jamaica, Hurricane Gilbert came visiting as a Category 3 system. But by the time it got to the west, it had become a Category 5 hurricane and had pummeled the island.

From infamy to appreciation and even respect at the first direct hit on the island for well over 30 years, and the hardest hitting system in the country’s history, Gilbert is sometimes remembered with fondness by those who had the ‘privilege’ of having experienced the biggest bully to have hit town or country.

Today, to mark the anniversary of the hurricane, Loop New presents 31 items of fact or nostalgia behind the most memorable weather system locally.

1. Hurricane Gilbert is the most destructive and severe storm to have hit Jamaica.

2. Gilbert was the first direct hit on the island by a hurricane since the early 1950s.

3. Jamaica experienced a huge influx of relief supplies in the aftermath of the hurricane

4. A zinc scandal relative to relief materials followed the destruction by the hurricane.

5. ‘Full a bully beef’ – the staple among diets during the recovery period after the passage of the hurricane.

6. Introduction of the average clause by home insurers followed the devastating impact of the hurricane.

7. Gilbert ranks second to Hurricane Wilma in 2005, as the most intense Atlantic hurricane.

8. A total of 45 people died from the impact of the hurricane in Jamaica.

9. There was an estimated US$4 billion in damage locally.

10. Gilbert took a total of over 400 lives across the wider region, including the United States.

11. The overall damage from the hurricane was around US$10 billion regionally.

12. The hurricane gushed some 32.4 inches of rain in the mountainous interior of the island, resulting in wide-scale flash flooding.

13. Singer Lloyd Lovindeer did the beloved ‘Wild Gilbert’ hurricane ‘anthem’ song, which went viral within days, and was one of the fastest-rising songs nationally. More than 200,000 copies of ‘Wild Gilbert’ were reportedly sold.

14. Among the humourous lyrics of ‘Wild Gilbert’ was the reference to his roof migrating without a visa.

15. The island’s poultry industry was virtually wiped out by the impact of the hurricane.

16. Overall, some US$500 million in damage was estimated across the local agricultural sector, including a virtual wipe out of the banana industry.

18. After a sobering aerial tour, then Prime Minister, Edward Seaga compared the damage across the island to Hiroshima after the atom bomb was dropped on that Japanese city in World War II.

19. Significant looting was an unfortunate feature of the passage of Hurricane Gilbert.

20. Daily lining up at ice factories and bakeries, where rationing was the order of the times, was a daily feature for some time after the passage of the hurricane.

21. Lack of public electricity and water supplies became reality post-hurricane, for months in the case of some communities.

22. Over 600 persons remained in official shelters in January 1989, almost four months after the passage of the hurricane.

23. There was a huge and noticeable baby boom some nine months after Gilbert left.

25. It was estimated that more than 800,000 persons sought shelter before, during and immediately after the hurricane.

26. A one-month state of public emergency was declared for St Thomas, St Catherine, and Kingston and St Andrew.

27. Gilbert struck during the local pear season, sending thousands of the much-loved fruit thudding to the ground.

28. Leaking or blown off roofs were typical features of the hurricane’s aftermath.

29. Over 90 per cent of the island’s health facilities were damaged.

30. Due to its devastating impact, the name Gilbert was retired in the spring of 1989 by the World Meteorological Organization. It was the first name to be retired since Hurricane Gloria in 1985.