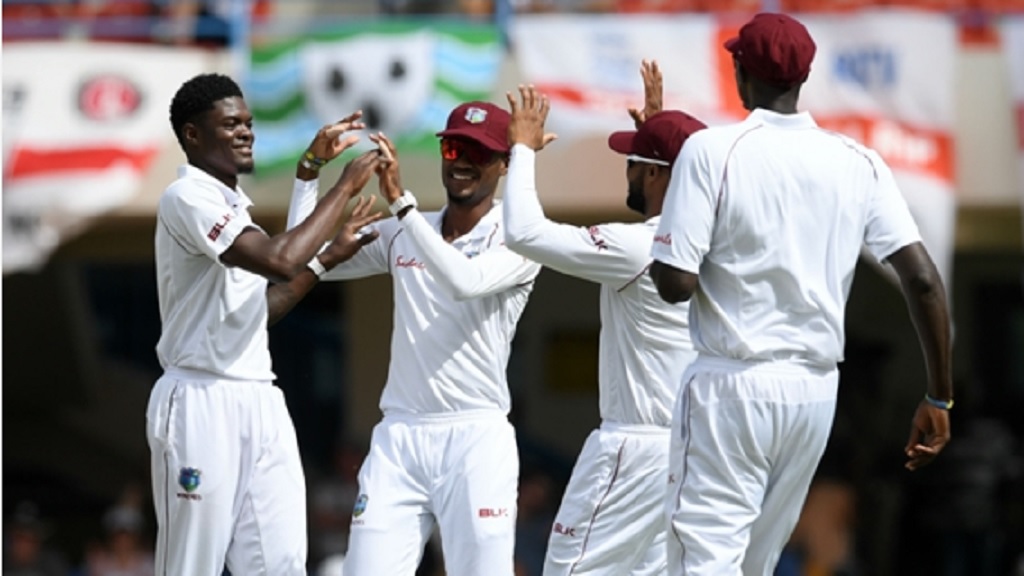 West Indies' pacemen took advantage of a lively surface in Antigua to dismiss England for 187 on the opening day of the second Test, before reaching 30 without loss in reply.

Kemar Roach (4-30) and Shannon Gabriel (3-45) were the chief destroyers as the tourists, who were skittled for 77 in Barbados en route to a thumping first-Test defeat, again endured a tough time of things with the bat.

Given the amount of variable bounce and seam movement in evidence on day one, Joe Root's men may feel they have enough runs to be competitive, but Kraigg Brathwaite and John Campbell enhanced the Windies' position with a gutsy and patient opening stand.

England's first-wicket pair were parted inside five overs after the hosts elected to bowl, Roach squaring up Rory Burns (4) with a beauty that induced an edge to Jason Holder at second slip.

Joe Denly, making his Test debut at 32, failed to convince and made just six before departing in abysmal fashion, swishing wildly to feather an edge behind from Alzarri Joseph's first ball, a dreadful loosener well outside off stump.

Root then fell to a brute of a delivery that epitomised the unpredictability of the playing surface, as a full ball from Joseph reared up alarmingly to take the glove and loop to the slip cordon, where a leaping Campbell parried it upwards to allow Shai Hope to complete the catch.

The promoted Jos Buttler did not last long before becoming Holder's first scalp, but Bairstow counter-attacked superbly, bringing up a thrilling half-century before lunch.

When Bairstow and Ben Stokes were ousted by Roach and a fired-up Gabriel respectively early in the afternoon, England were in disarray, but Moeen and Foakes brought some much-needed stability in a stand of 85.

However, Moeen was caught at mid-on early in the evening session when a Roach delivery appeared to get stuck in the pitch and West Indies brought a swift end to the innings thereafter, with Foakes playing on to Gabriel via glove and hip before Sam Curran and James Anderson followed in quick succession.

Wicketkeeper Foakes was absent when England took the field, bruising on his right hand pressing Bairstow into action behind the stumps.

There was still plenty of movement on offer as the Windies began their reply, but Brathwaite and Campbell - who finished up unbeaten on 11 and 16 respectively - dug in to survive 21 overs, registering a solitary boundary between them.

Campbell did get away with one moment of madness when he attempted an over-ambitious scoop off the recalled Stuart Broad and succeeded only in diverting the ball into his own neck, while England spurned a review for lbw as Curran was shown to have overstepped.