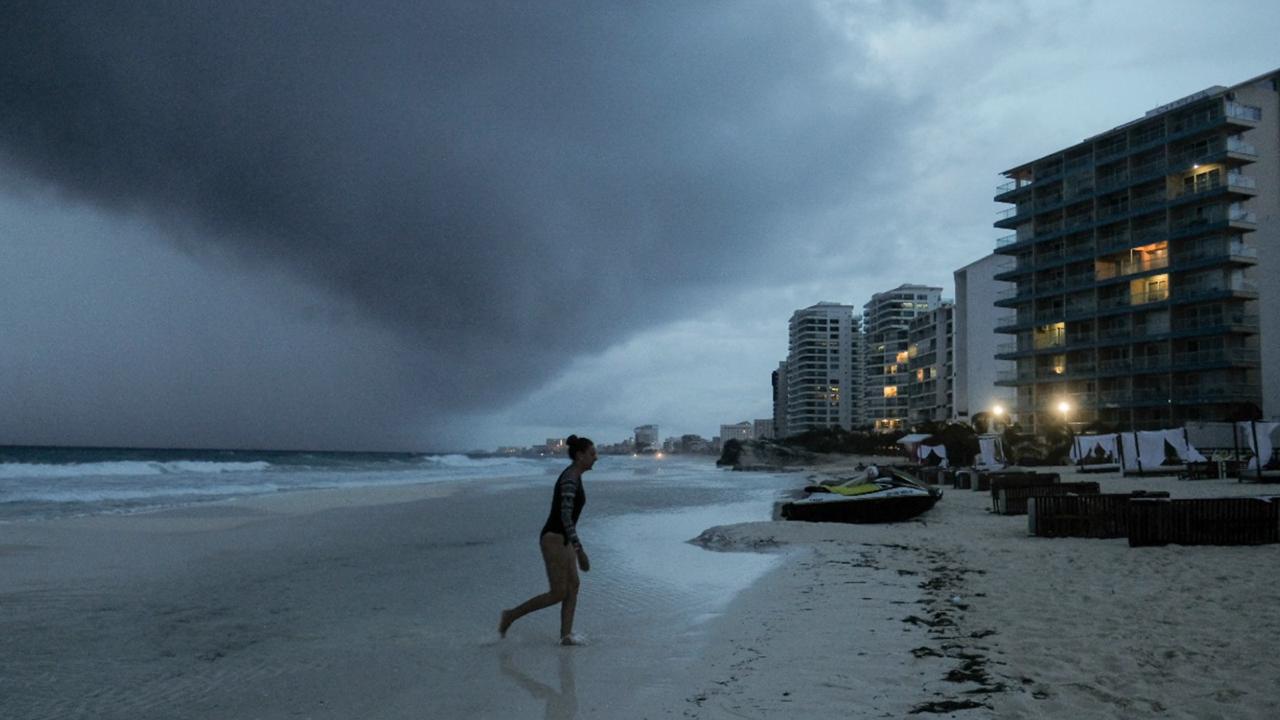 Clouds gather over Playa Gaviota Azul as Tropical Storm Zeta approaches Cancun, Mexico, Monday, October 26, 2020. A strengthening Tropical Storm Zeta is expected to become a hurricane Monday as it heads toward the eastern end of Mexico's resort-dotted Yucatan Peninsula and then likely move on for a possible landfall on the central US Gulf Coast at midweek. (AP Photo/Victor Ruiz Garcia)

Hurricane Zeta began lashing Mexico's Caribbean coast resorts of Playa del Carmen and Cozumel with high winds and rain Monday evening as it headed toward the Yucatan Peninsula and then a possible landfall on the central US Gulf Coast at midweek.

Zeta — the earliest ever 27th named storm of the Atlantic season — was centred about 45 miles (70 kilometres) south-southeast of Cozumel island, the UNNational Hurricane Center said. It had maximum sustained winds of 80 mph (130 kph).

The centre was expected to make landfall within a few hours, and Quintana Roo state Governor Carlos Joaquín said “nobody should be on the streets ... you shouldn't go out anymore” until the hurricane passes.

In Playa del Carmen, south of Cancun, Mexican tourist Elsa Márquez held up her beach towel to show how the force of the wind blew it out straight in the air, rattling with the strong gusts.

“This is our first experience (in a hurricane) and the truth is we are a little afraid because we don't know what will happen, but here we are,” said Márquez, who was visiting the resort from the north-central state of Queretaro.

The hurricane was moving northwest at around 12 mph (19 kph) after being nearly stationary over the weekend. Forecasters said Zeta was expected to move over the Yucatan Peninsula during the night before heading into the Gulf of Mexico and then approach the US Gulf Coast by Wednesday, though it could weaken by then.

A hurricane watch was posted from Morgan City, Louisiana, to the Mississippi-Alabama state line.

Trees felled by Hurricane Delta barely three weeks earlier still littered parts of Cancun, stacked along roadsides and in parks. There was concern they could become projectiles when Zeta scraped across the peninsula.

Several stoplights around the vacation destination remained unrepaired since Delta.

Local authorities were taking the storm seriously, but with a distinctly less alarmed tone than when Delta strengthened to a Category 4 storm off the coast. Quintana Roo state suspended alcohol sales and Governor Carlos Joaquín González said everyone should be off the streets by Monday afternoon.

Residents pulled their boats from the water, but the sort of panic buying seen in the run-up to Delta was not evident.

State officials reported nearly 60,000 tourists in the state as of midweek. The state government said 71 shelters were readied for tourists or residents who might need them. Joaquín said he hoped it would not be necessary in most cases to move guests out of their hotels.

The forecast track would have Zeta hitting Cozumel and striking the mainland just south of Playa del Carmen. Delta made landfall October 7 between Playa del Carmen and Cancun with top winds of 110 mph (175 kph).

The hurricane centre said Zeta could bring four to eight inches (10 to 20 centimetres) of rain to Mexico, the Cayman Islands and parts of Cuba, before drenching the central US Gulf Coast.

The storm could make landfall anywhere from Louisiana to the Florida Panhandle, forecasters said.

Zeta broke the record for the previous earliest 27th Atlantic named storm that formed November 29, 2005. It's also the 11th hurricane of the season.

This year’s season has so many storms that the hurricane centre has turned to the Greek alphabet after running out of assigned names.

Zeta is the furthest into the Greek alphabet the Atlantic season has gone. There was also a Tropical Storm Zeta in 2005, but that year had 28 storms because meteorologists later went back and found they missed one, which then became an “unnamed named storm."

TS Zeta gaining strength, forecast to become a hurricane in a day or 2