To borrow the slogan ‘for us, by us’, this encapsulates what Sheena Brereton, a woman in tech in Barbados wants from young girls coming up on island, and throughout the region.

Recognising how important technology is, especially app development in 2018, Brereton says that with more tech-savvy young girls in school working towards getting into the technological field, it could mean apps and technology better designed and tailored to the needs of female users.

“I think that women working in the field can develop apps and programs geared towards women specifically, because most of the programmers, and developers are men, and their thinking is going to be towards the perspective of a man, whereas women will come now and make it more user-friendly. We may also look at bringing in features that cater to women and make it easier and more accessible for women.”

From the day's activities scheduled for April 26, she said: 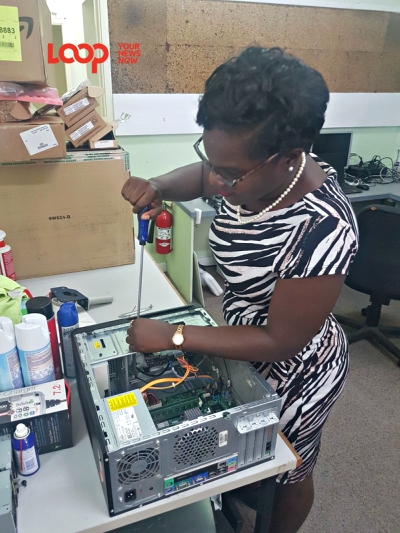 “We believe that they [the girls] should recognise in a field that is really dominated by men, because men tend to gravitate towards technology than women, that they too can make a stand and a difference in the actual IT world, ‘cause it’s a growing field and women are actually developing in the world more. So they should see themselves moving forward in this field.”

And she pointed out that others, like herself, are already making a way for girls coming into ICT. With a chuckle, she said, “We head lots of departments in technology. We are getting down and dirty in the field. We are no longer limited to just selling the items. We are actually taking part in the practical side of it as well – building systems, dealing with networks and stuff like that.”

She said the myth that tech is a man’s world, is being busted. “It’s not a field for men alone anymore. Women now have a role to play in technology.”

This is the second year for the hackathon and once again Tropical Computers is on board. Why did they sign back on with the initiative? She said, “We strongly believe that women should actually play a greater role in the IT world, so that’s one of the reasons that we decided to go with it again. Women are a force to be reckoned with; no longer are we stuck in the homes, we are getting into the field of technology and so forth.”

Last year there was a smaller number of participants but with a projected figure of over 800 girls from five Caribbean territories to “hack”, Tropical Computers has not only re-signed, they have increased their contribution as well. They're providing more laptops and equipment to ensure a successful second edition of the hackathon.

Girls in Barbados, Jamaica, Trinidad and Tobago, Guyana and St. Vincent and the Grenadines, will come together for the immersive experience in technology in celebration of the International Telecommunication Union (ITU) Girls in ICT Day, on Thursday, April 26, 2018.

Woman-led SheLeadsIT and Change Makers Development Ltd. are staging the second edition, under the theme #SafeGirlsSafeFuture.