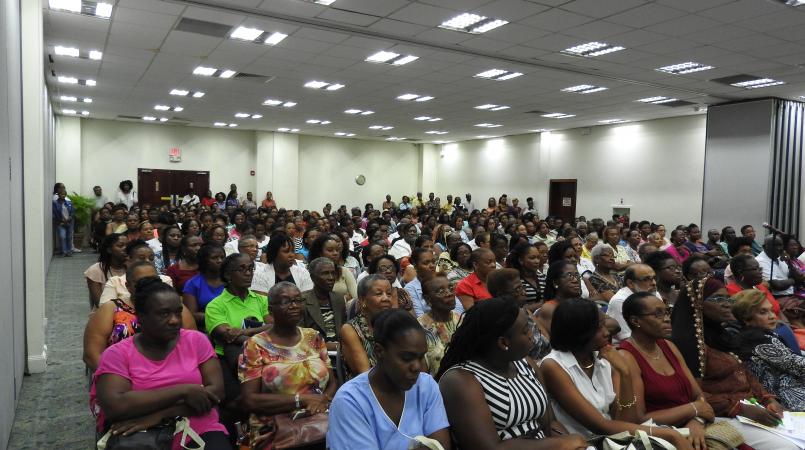 “Women’s Health” was the main topic of concern at the recently concluded lecture curated by Cancer Support Services in collaboration with 21st Century Oncology International Services.

Held at The Lloyd Erskine Sandiford Centre on Friday, September 9, the women’s health lecture featured intense discussion and analysis of various issues affecting the well-being of women. One topic that was on the agenda was “Make Your Body Less Conducive to CAN-cer: Activities, Action, Attitude and Atmosphere” which was led by Dr. Niraj Mehta MD and Radiation Oncologist who flew in from Florida to speak at the event. In his feature address he spoke about the importance of sleep for maintaining a healthy lifestyle and fighting cancer.

“Sleep. A lot of people are sleeping less than five to six hours…which causes a lot of deprivation on the brain where your brain can’t actually process so your attention goes down, memory goes down and all of your functioning goes down. So what happens? You feel unwell.”

Delving further into the issue of sleep deprivation, he spoke about the arrogance of ignoring the need for sleep, stating, “There is nothing cool about not sleeping because it is so important to restoring yourself”.

Pertaining to combating sleep deprivation, Dr. Mehta listed a few integrative therapy methods such as imagery hypnosis and meditation which he said decreases one’s cortisol and physiological responses. Furthermore, he addressed the importance of exercise and how it is positively linked to exercise adherence in cancer survivors. He urged those present to shy away from thinking of exercise as just the cliché hardcore, stressful activity but instead focus on the range of activities such as dance and yoga that can be used as effective forms of exercise.

Also on the panel was Dr. Vikash K. Chatrani (Obstetrician, Gynaecologist & Gynae-Oncologist) who touched on the subject of “Uterine Cancer – The New #1 GYN Cancer”. He spoke about adjuvant treatment specifically chemotherapy and using high-dose concentrated radiation which can be used to destroy tumourous cells. Looking at the prognosis for uterine cancer provided by the International Federation of Gynecology and Obstetrics (FIGO), Dr. Chatrani revealed that 97 per cent of women with Stage 1 uterine cancer will survive after completing the treatment. He concluded by insisting that women pay attention to their bodies and to identify what is normal and what is not.

Ultimately on the event’s line-up was Master of Divinity Reverend Paul A. Leacock who discoursed the matter of “Coping with the Emotions after a Diagnosis of Cancer”.

Expressing the need to be emotionally responsible, he further added that in order to effectively and efficiently take responsibility with regards to their diagnosis, one must sit and calmly process their thinking while bringing their “jangled” emotions into focus. He closed by exploring the subject of fears stating that one must correctly identify their fears to ensure that these fears don’t subconsciously compromise one’s well-being.