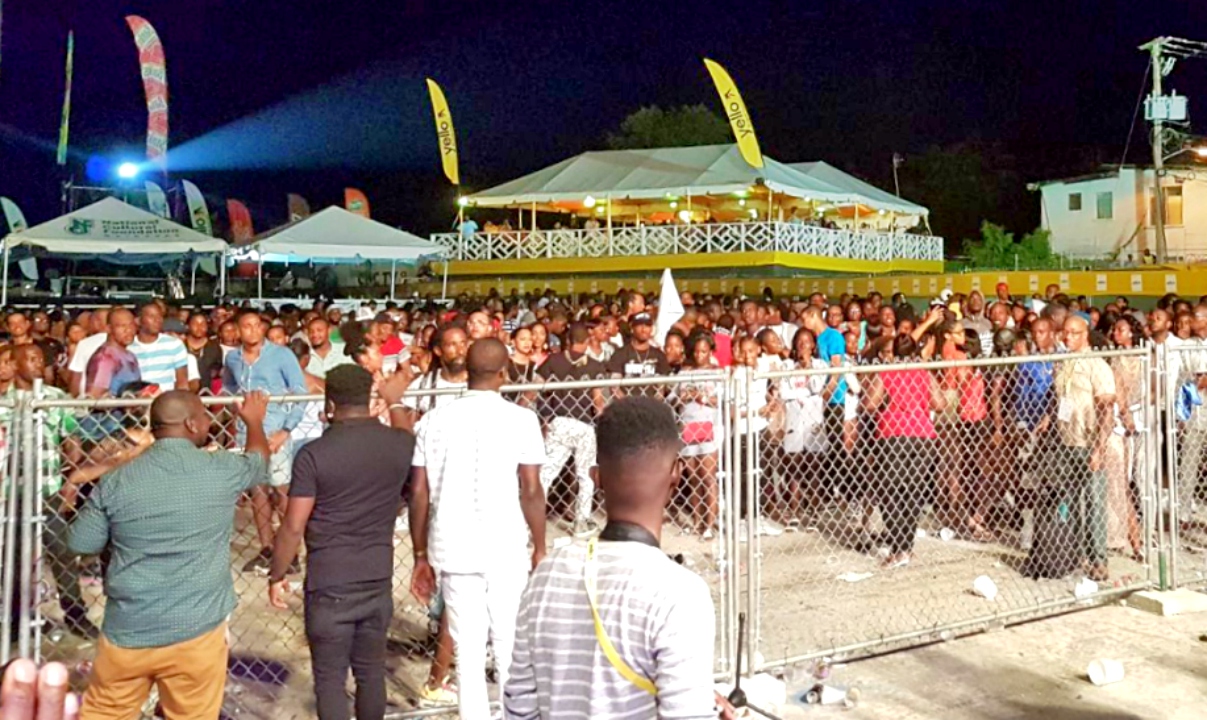 Patrons clear the area where some fans began to get rowdy when results were announced.

Just as when he claimed the first Bashment Soca crown last year, there was a boisterous crowd reaction when Stiffy was announced as the winner of the 2017 Yello Bashment Soca Competition early this morning at Kensington Oval.

But this time around, it was not all due to overwhelming support for his win.

From the time Scrilla hit the stage first in the competition, it was clear that he had one of the biggest fan bases – and they came out in their numbers waving bandanas, flags and other items to show their support.

Chanting, "Wood! Wood! Wood!", Scrilla's supporters anxiously waited for the results, confident that he was walking away with the crown.

He had delivered a dynamic performance of his popular song "Wood", which tells the story of a female carpenter in search of material to do her work. His presentation included a skit and energetic dancers, and also singled out challenges such as his critics, the economic struggle and potholes in Barbados.

When it was revealed that Scrilla was unsuccessful in dethroning Stiffy, disappointment and anger soon filled the hearts of supporters who believed their favourite artist was somehow cheated.

Insults and plastic bottles were hurled towards the stage, fences were kicked in and some even shed some tears unable to comprehend the results.

Other aired their disbelief on social media soon after:

"Very unpopular decision with Stiffy retaining retaining Bashment Soca Crown, what did Scrilla do wrong, guess his wood got stolen," said one person.

"I ain't no fan of de wood but I like to give Jack his jacket and as far as I'm concern Scrilla got um. He set such a high standard that de rest tried but failed to reach anywhere near what he did," added another.

Scrilla was still on stage when the ruckus began and waved his hands in disagreement as he tried to calm down his upset fans.

The situation was eventually diffused and there no reports of any further incidents inside or outside of the venue.