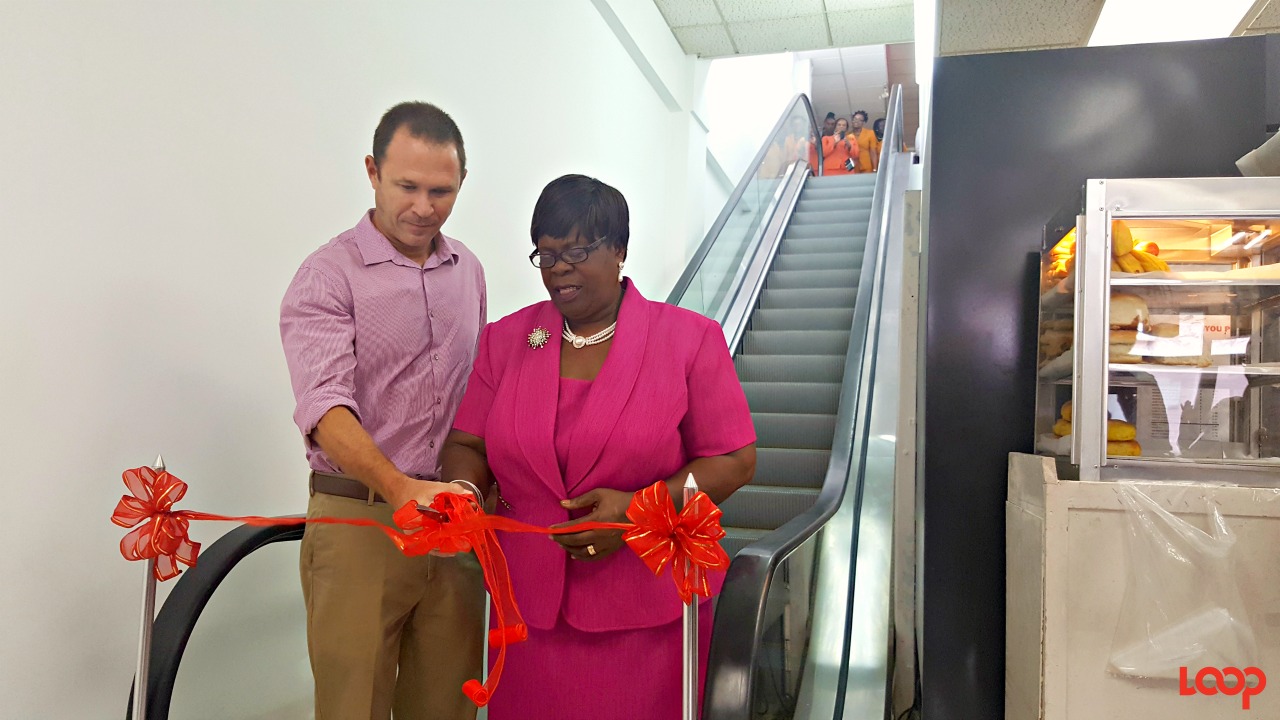 Managing Director Martin Bryan cutting the ribbon to open access to the new escalator to the public, along with the most recent retiree Irma Adams.

The winds of change are blowing through the Woolworth Department store and not only was a new escalator installed and put into operation, the variety on offer may get shaken up after consideration of sales as well.

However, one thing remains – Woolworth is not relocating out of the Bridgetown.

Managing Director Martin Bryan was talking to the media at the store yesterday after he turned on the newly installed escalator. He said that such an investment is a testament to the store’s commitment to the City. “So we have decided to invest back into an escalator, we could have easily said well the escalator not working, use stairs, but we recognise the needs of our customers and the wants and we invested in it.

“That shows that we still think the City is a vibrant place to be and we look forward to bigger and better things.”

Believing that business in the City “is very important”, he said that “City owners and retailers and business, in general, need to keep the environs modern, clean, create the infrastructure for shoppers in the City to make it more convenient, to make it nicer to come into the City and shop.”

Urging persons to stop using parking in The City as an excuse he said, “I think the issue with have parking is there is plenty of parking, maybe the distances you have to walk with the load maybe an issue.”

Therefore, a shuttle service is on the books and under consideration.

“We are trying, we’re thinking of maybe a shuttle service to circulate around the town environs, where you can park in a car park, get shuttle that does only a couple stops.” He said it should work out to be more convenient.

The police were praised for their zero tolerance approach to crime and their constant patrols as crime has “significantly dropped”.

Bryan asserted that the activity in Bridgetown is not as dismal as persons would have others believe.

“In general, the negatives that you here about town are not as bad as people would consider.

“We still have a lot of people coming into town but the economy is such that you don’t have the disposable income, but I’ll tell you what. If you want to save money in terms of what you need to buy you will save money coming into town.” In comparison to shopping in the out of town malls and shopping centres, he said prices away from the City are “significantly higher”.

To get more persons into the store he said that other changes are on stream.

“What we have done is we are looking at decreasing our margins in certain areas to attract the shoppers, having specials, looking to have different competitions, promotions to get the shopper to come here as opposed to going somewhere else, that is what we are looking at.”

But he assured, “We’re a department store and will continue as such.” F.W. Woolworth Barbados will remain a one-stop-shop; “Whatever, we have it. Woolworth got that. That is our logo. We have everything that you could want and we need to keep it like that. We certainly are not going to get rid of any departments. We may expand on some and contract in some but we still plan to have all the departments that we currently have.”

In terms of business hours, he said, they extend shopping hours in December for Christmas and during August for back-to-school, “but during the normal course of business, he said they are not getting that feedback from customers that Sundays we need to come into town.”