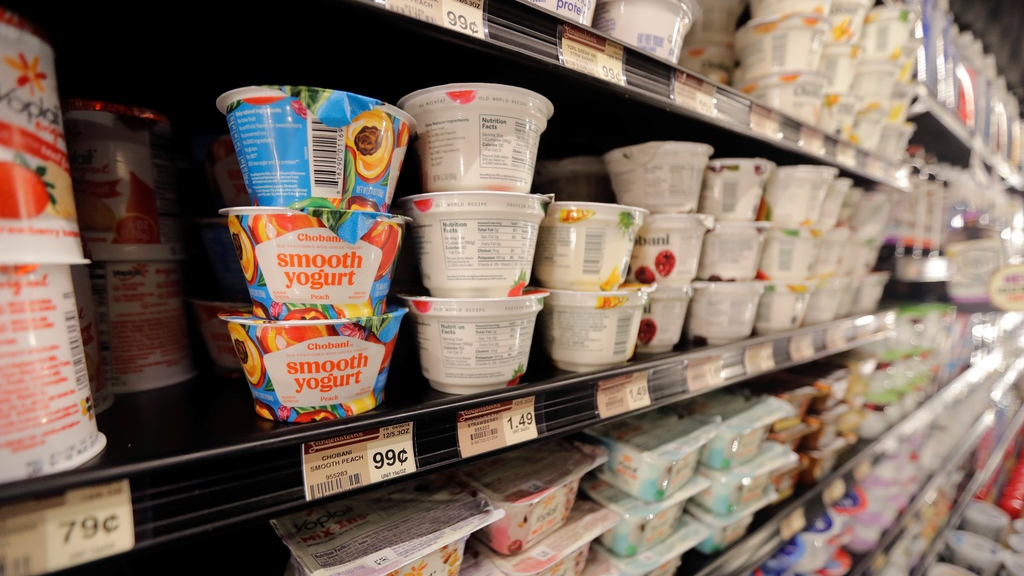 This July 11, 2018, file photo shows yogurt on display at a grocery store in River Ridge, La. Despite shelves full of new varieties, from Icelandic to Australian to coconut-based, U.S. yogurt sales are in a multiyear slump. Yogurt companies are confident that more new products can boost sales. But some analysts are skeptical, saying larger trends - like growing sales of breakfast protein bars - will be hard to turn around. (AP Photo/Gerald Herbert, File-

Yogurt sales in the US seem to be souring.

Despite shelves full of new varieties — from Icelandic to Australian to coconut-based — US yogurt sales are in a multiyear slump.

Yogurt companies are confident that more new products can boost sales. But some analysts are skeptical, saying larger trends — like growing sales of protein bars — will be hard to turn around.

“Consumers are just not eating as much yogurt as they once did,” said Caleb Bryant, associate director of food and drink reports for Mintel, a market research company.

Chobani — the second-biggest yogurt maker by US market share — thinks innovation can halt that slide. On Monday, the company introduced its first oat-based yogurts, capitalising on booming sales of oat milk and consumer interest in plant-based eating. The move follows market leader Danone’s introduction last July of oat-based yogurts under its So Delicious brand.

“If we stay close to the consumer and continue to give them the food they want from a trend perspective and a health perspective, yogurt continues to grow,” Chobani President Peter McGuinness said.

But for the first time, Chobani is also moving into non-yogurt products. In January, it’s launching four flavours of oat drinks as well as dairy-based coffee creamers. It’s an acknowledgment of market realities: coffee creamer and oat milk sales are climbing even as other products — including Greek yogurt and soy milk — struggle.

McGuinness insists the move isn’t a defensive one, and that Chobani is still bullish on yogurt. The company felt coffee creamers were a good fit since cream is a byproduct of yogurt manufacturing, he said. And the company is convinced that plant-based eating is a trend with staying power.

“We love yogurt and we still think yogurt is underpenetrated,” McGuinness said. Chobani, which is privately held, says its dollar sales are up nine percent so far this year thanks to the introduction of lower-sugar and coconut-based yogurts.

McGuinness said Chobani plans to enter other market categories, too. The company opened a 70,000-square-foot innovation center in Twin Falls, Idaho, earlier this year and has hired additional research and development staff.

Bryant agrees that innovation is important, but he said yogurt companies are just taking share from each other since overall sales aren’t growing.

He predicts yogurt sales will continue to fall because US consumers are eating breakfast on the go and aren’t making time for spoonable yogurt. They have new options, like nutrition shakes and protein bars, and many aren’t keen on dairy products.

“It’s not one major factor. These little things are chipping away at the market,” he said.

In a Mintel survey released this month, 30 percent of people who bought yogurt in the past three months said they were also buying high-protein foods or probiotic foods instead of yogurt. Meanwhile, 18 percent said they were overwhelmed by the number of yogurts and yogurt drinks on the market. The average grocery store has more than 300 separate yogurt products, a four percent increase from 2015, said Acosta, a marketing firm.

“We need to stop duplication and make sure we are answering consumer trends and consumer needs,” he said.

Bryant said the market will only grow if yogurt makers attract new consumers and convince them to eat yogurt for different occasions, like snacks or dinner. Yogurt treats for kids, for instance, have helped bring in new buyers, he said.