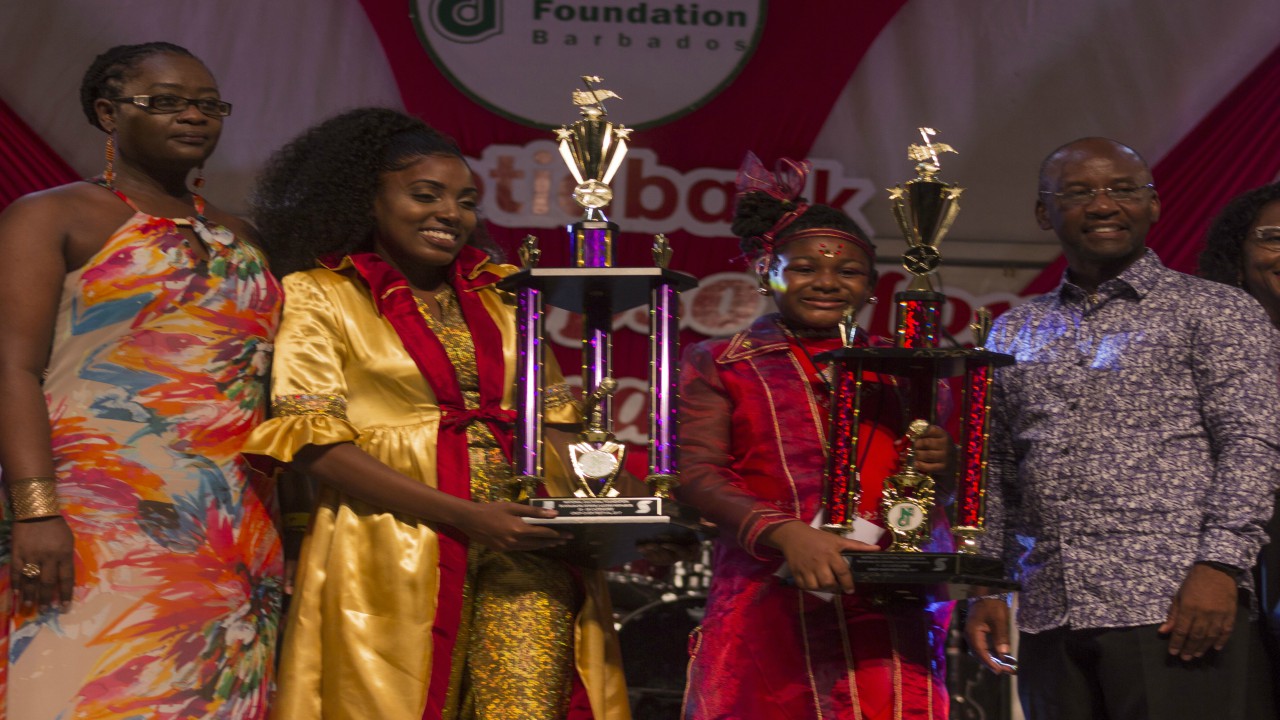 Sparkle T was crowned queen in the 13-18 category (second from left), Mhizz Kibabba was the winner in the 7-12 category (third from left) and Minister of Youth and Culture, Stephen Lashley (right). (PHOTO: Alimayu Young-Codrington)

The female dominated competition took place at the Kensington Oval Amphitheatre last night, into the wee hours of the morning.

Showers of rain could not deter first timer and winner of the 7-12 category Kiara 'Mhizz Kibabba' Carrington, who brought back the love walking away with $2,000.00 and a trophy.

The 12-year-old Lester Vaughn student pleaded to society to end the much-rising crime and violence in the island. Her catchy song entitled 'Bring Back The Love' got the judges votes, encompassing her with a full 100 points by the end of the night.

She narrowly defeated Emari 'Browne Star' Browne's, 'Don't Pressure Me' and Keimani's 'Master Kei' Deane's  'A Child's Plea' who were both tied for second place and won $1,500.00.

Defending champion Summa Sargeant had no choice but to walk away with $750.00 as she finished in fourth place with her comedic song 'Potholes'.

Savir 'De Rock' Browne, Casey 'KCB' Jemmott-Boyce, Hannah 'Glow' Grant and Elissa 'The Mighty Ballerina' Callender Springer did not leave empty handed and were all given $600.00 for fifth to eighth place.

In the 13-18 category 'The Golden Chain' was spread throughout the crowd by Teri 'Sparkle T' Williams-Niles as she spoke about bringing the Caribbean islands together and uniting as one. The self-penned song was catchy and her presentation was full of energy including dancers, stiltmen who moved across the stage from time to time.

The 17-year-old Queens College Student also wrote for three finalists in the competition.

First-runner-up and $1,800.00 went to Kymorhi 'De Overcomer' Trotman with his anti-bullying song entitled 'Save A Child'.

Fourth place went to Adonica 'Lady Nica' Sheperd, who won $1,000.00 and had 'Questions For De Minister'. Her presentation which included a snippet of her interviewing Minister Ronald Jones was well received.

Don-Ross 'Mr Personality' Oliver said 'Save It For Me' and emerged as IGM's Rising Star. He won a lunch for three at Ocean 2 Hotel.