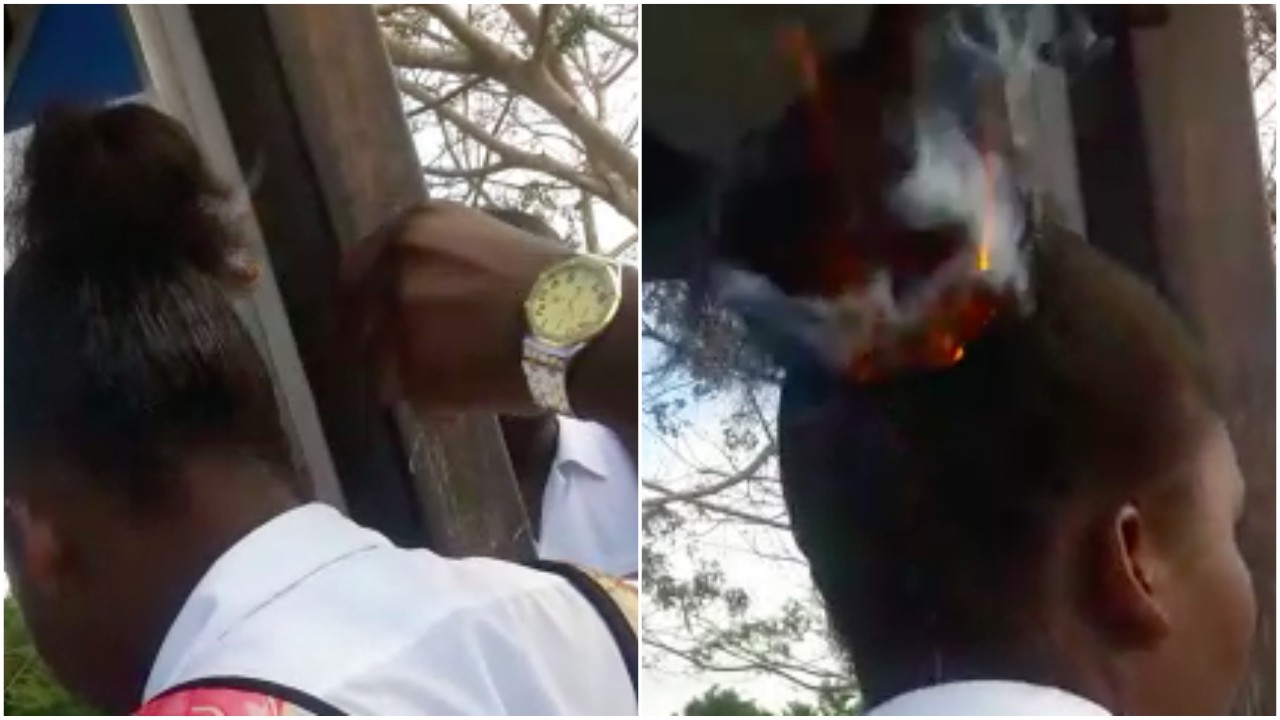 This is not the time to simply throw the weight of the law at the male student who set a schoolgirl’s hair on fire, nor is it an opportunity for another programme to be tossed at a student issue in a haphazard, knee-jerk way.

This is the belief of the Chairman of the SAVE Foundation, Barbara Goddard. She assumed the post in the last quarter of 2017.

Speaking to Loop News about the issue, Goddard said, “We need a lot of groundwork but it’s not all school-related. We need to get people more aware of each other and more balanced. There is a lot of work to be done, and we really need to look at what we want to achieve.”

Recognising that the 9-second video left many unanswered questions, she spoke to multiple issues which it brought to light.

Not seeking to the put the victim on the back burner, she, however, asked the question of ‘Why did he have a cigarette lighter?’

Goddard said that she noted the laughing children in the video, and she called on adults to remember how stupid they were as children, “Remember what it meant to be a stupid young person.” But she did not give that as an excuse for the incident.

However, she threw fuel to the flame as they say, when she said that we now need to “look at this stupidity and ask what led to this in the first place.

Moreover, she added, “He does not have the type or level of awareness to see that his behaviour of actually setting someone on fire, how dangerous it is, and it shows a lack of empathy within him.

“So there is something within that is certainly lacking. If I were his parents, I would certainly be concerned if I have a person who is a borderline sociopath or something like that. I’m very concerned about his behaviour, even why he thought about doing it in the first place.

“From the short clip you don’t know if it is something that was all planned, if it a behaviour because someone was being vengeful, you really do not do, but all you can say is that it is a very dangerous activity that he has indulged in, extremely dangerous.”

Focus on including empathy in our culture

Considering others’ needs to be built into our way of thinking, behaving and living in Barbados.

Related article :Safety and health in schools should be priority

He seemingly had no knowledge of the danger he was not only posing to her but himself if her hair contained highly flammable contents that caused her hair, head, nape and his hand to have gone up in flames.

She said, “The young man clearly does not have a concept of what it means to light somebody’s hair. Secondly, the young lady’s hair has got various chemicals, which are going to spread it quickly.”

Get specialists to teach and increase emotional intelligence, empathy

In many schools, she highlighted the fact that teachers trained to teach Mathematics, for example, are being mandated to put aside their niche area and teach soft skills. She said that this is unfair to the teachers who are in many ways not cut out for the task and not passionate about the topics, but it is also unfair to the students because the delivery of subject matter affects its impact and longevity.

“If we are going to bring programmes into schools, I think the important thing is to have people who specialise in those particular areas, rather than the teacher who has gone into teacher training and it is all about imparting knowledge…but the subject matter that helps persons to be well-rounded individuals where you want to focus on the cognitive development and the emotional development, and the sexual development and the mental development of young persons, I think you really need to give those subjects to people, yes they can still be teachers, but ones who are more specialised in those areas, rather than somebody who today is teaching Maths and then tomorrow is going in and doing personal development.”

Quickly she stated that she’s not saying that teachers are not capable of it, “but I think it is unfair to the teachers…it is not going to do justice to the teacher nor the students on the receiving end.”

Monitor and measure the success of programmes

Already we have a slew of programmes in the schools, but the question is, ‘Are they reaping rewards?’

Goddard said she wonders, ‘Where are the follow-up programmes?’

“You really need to know that what you are delivering is having an impact, so therefore it must be quantified. So unless you are going to put those things in place, where you are monitoring that programme and you’re going to look to see in three months I have seen X-amount of young people, what is happening with regard to that training? We should have some sort of system in place where those young people can come back and ask questions, you can follow-up and also that parents and guardians are well aware of these programmes and they themselves are actually understanding what it is their children are learning…

“I imagine and I haven’t been into the schools' systems around the island other than giving the odd talk, but I imagine there are enough programmes in the schools and the question is, ‘Can they be quantified? Are they evaluated? What are the reports and outcomes from them?’ I have no idea so I don’t see the point in just generating programmes. Although we might get one or two people who benefit from it, I think overall when things are not done in its entirety with guidelines and measures in place, well then it’s just another programme!”

Look outside the school at parents and adults

She said that parents need to be on board because a lot of behaviour children indulge in is learnt behaviour. “It isn’t necessarily behaviour that they have learnt in school, it is behaviour outside of school, and I think that what we need to do is do more with adults.” She explained that some adults set “such bad examples that children follow. I think we need to do a great deal of work with parents and people who are not parents.”

Furthermore, she painted a picture adding:

“You can run six dozen programmes in the schools, when that child leaves that school and goes home, if that child is going home to an environment that actually has issues, that’s really where there will be the challenge, because no matter what you do in the schools, the influencers and the pressure and everything that is happening in the home and the home environment is going to have enormous impact. That child was raised in that environment, his or her early years, first seven years are formed in that environment.

“So when we send children to schools and we set up programmes, those children are still going back to those environments so it is not so much that the schools need more programmes, I would say the outside environment needs programmes.

And she asserted that his parents need to address his behaviour.  They need to ask him, ‘Why would he embark upon setting anyone alight? It is very serious!”