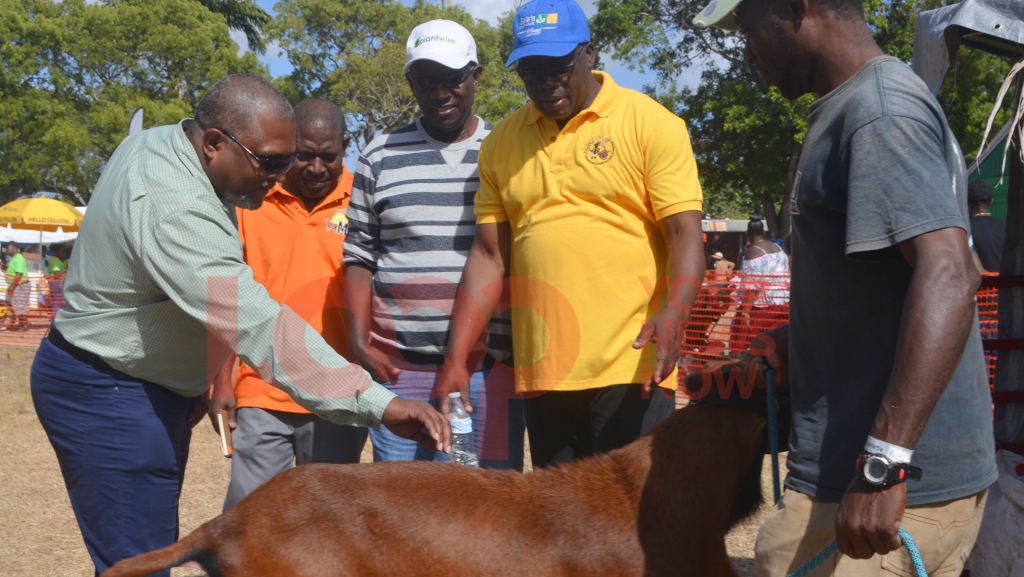 Schools – primary and secondary, aplenty entered displays for Agrofest 2019 to the delight of organisers and the Agriculture Minister, but beyond the students, young persons across the island seem to be actively carving their financial stability using agriculture without looking for handouts.

The Minister of Agriculture and Food Security, Indar Weir toured the grounds of Agrofest at Queen’s Park last Sunday on its final day.

Pleased by his observations, he told the media, “Given the amount of young people that I am seeing coming forward and getting involved and taking risks, many doing it at their own expense not asking government for any help.”

This he added is a good example of where agriculture can go in Barbados and what the future of Barbados and its economy will be depending on in order to help rebuild and restructure this economy.

His comments came while accompanying the Chief Executive Officer of the Barbados Agricultural Society (BAS) James Paul on the tour. Paul too stated that he is encouraged by the involvement of the young people annually regardless of the challenges facing the event.

Paul shared that while the subventions from government were cut, he is still happy that they were able to pull off the three-day event, which ran from February 22 to February 24, 2019. During the tour, Paul thanked Weir for the ministry’s support, in spite of the difficult economic conditions.

Against this background, Paul still pledged that they at the BAS intend to see Agrofest get even bigger, not only from the point of view of size but by penetrating those agriculture enterprises to show case their products, and get the exposure that they can market themselves.

He contends that it is important to get the support of the community, and lauded young people who continue to show interest in the sector, many of whom he indicated are out in full force this year with new and innovative products.

His sentiments were echoed by Minister Weir who signalled the ministry’s commitment to agriculture and Agrofest and to always ensure that they play a vital part however they can.

Weir told reporters that seeing so many young people in all areas on display warmed his heart and spoke to the avenues that are being created for the youth;  avenues that they are also creating for themselves.

“Agrofest continues to highlight what is going in Barbados and the distance we have come in livestock farming, where the black belly sheep clearly is a popular breed.  And the programme that we have at the ministry for the rapid expansion of the black belly sheep taking advantage of the full value chain that is available to us.”

Overall, the Minister added that what is taking place in agriculture through private sector initiatives as well, is very encouraging, and shows that the future for agriculture is very bright.

Creativity whipped up for Agrofest can be exported