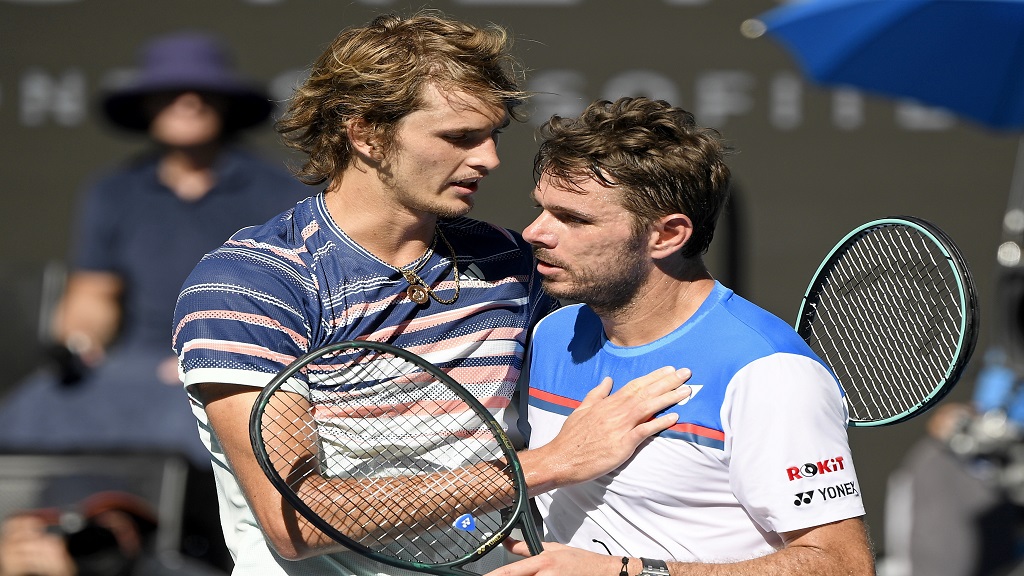 Alexander Zverev began 2020 with three consecutive losses, which meant he had plenty of problems -- and plenty of time on his hands ahead of the Australian Open.

So he showed up early and got to work, spending up to seven hours a day practicing in the week before the decade's first Grand Slam tournament.

That extra time paid off. So did a somewhat more relaxed attitude once this event began.

Zverev, a 22-year-old from Germany, reached his first major semifinal by overcoming a terrible start Wednesday at Melbourne Park and putting together a 1-6, 6-3, 6-4, 6-2 victory over three-time Grand Slam champion Stan Wawrinka.

“I was very impatient. In a way, also was maybe paying attention to it too much, to the Grand Slams. You know what I mean?” said Zverev, who has won three Masters titles and the ATP Tour Finals. “Everything else, I was just playing better tennis at the other tournaments. ... The Grand Slams, maybe, meant too much for me. This year I actually came into the Australian Open with absolutely no expectations because I was playing horrible."

After ceding the opening set in 24 minutes, Zverev regrouped, using all of his 6-foot-6 (1.98-meter) frame to get to balls along the baseline and stretch points until Wawrinka faltered. Zverev's sometimes-shaky serve -- he was double-faulting once per game while losing all of his matches at the season-opening ATP Cup -- was suddenly terrific, and Wawrinka's barrel-chested baseline bashing weakened.

How bad were things earlier in January for Zverev?

“I've been struggling with my forehand, my backhand, my volleys, my drop shot, my return. My waking up in the morning. My everything,” he joked. “It was not only my serve."

Zverev also was self-deprecating before his first-round match last week, saying that he knew no one considered him a favorite to win the championship. After his opening victory, he pledged to donate all of the champion's prize money, a little more than 4 million Australian dollars — about $2.85 million — to relief efforts for the wildfires raging around the country if he were to go all the way.

Wawrinka's backhand is among the most respected and feared shots in all of men's tennis. But it let him down on this day: He finished with five winners and 31 errors on that side, 18 unforced and 13 forced.

“After one set and a half, for sure, I was going a bit down physically,” Wawrinka said. “Also lack of energy.”

It all added up to Zverev getting to the final four at a major in his 19th appearance. He had been 0-2 in quarterfinals.

“The Grand Slams were always the week where I kind of even wanted it too much. I was doing things, in a way, too professional. I was not talking to anybody. I wasn't going out with friends. I wasn't having dinner. I was just really almost too, too focused,” Zverev explained. “Changed that a little bit this week. I'm doing much more things outside the court.”

On Friday, he'll take on No. 1 Rafael Nadal or No. 5 Dominic Thiem for a berth in the final. Nadal vs. Thiem was scheduled for Wednesday night local time. The other men's semifinal is Thursday, with defending champion Novak Djokovic facing 20-time major title winner Roger Federer for the 50th time.

Both women's semifinals are Thursday: No. 1 Ash Barty of Australia vs. No. 14 Sofia Kenin of the United States, and No. 4 Simona Halep vs. unseeded Garbiñe Muguruza.

None has won the Australian Open; Halep was the runner-up in 2018.

Halep and Muguruza -- both two-time major champs, both former No. 1s -- advanced Wednesday with straight-set victories. Halep, who has yet to drop a set, required 53 minutes to dismiss No. 28 Anett Kontaveit 6-1, 6-1, before Muguruza eliminated No. 30 Anastasia Pavlyuchenkova 7-5, 6-3.

"Perfection doesn't exist," Halep said, "but I'm very happy with the way I played. I felt great on court. I was moving great."

Zverev and Wawrinka, a dozen years older at 34, played on the steamiest afternoon of the tournament so far, with the temperature in the mid-80s Fahrenheit (about 30 Celsius) and no breeze to speak of.

Wawrinka had a far tougher trek to the quarterfinals, with a pair of five-set wins along the way -- including over No. 4 Daniil Medvedev, the 2019 U.S. Open runner-up, in his previous outing -- while Zverev hadn't dropped a set.

Yet it took merely 16 minutes for Wawrinka to move out to a 5-0 lead by grabbing 20 of the match's first 26 points, helped immensely by Zverev's issues controlling the ball: He accumulated nine unforced errors and just one winner in that span.

Soon enough that set was done.

“I was getting ready to (explain) to the press why I lost in straight sets, to be honest,” Zverev said.

But Zverev realized he needed to put less into his shots on such a hot day, when the tennis balls zoom much more than in cooler weather. He also got into a real groove serving, taking all 20 points in those games in the second set.

That allowed him to play more freely in his return games and he broke to go up 5-3 when Wawrinka shanked a backhand on one point, then netted a forehand on the next. Zverev shook his right fist and bellowed, "Come ooooooooon!"

One more hold at love later, he evened things at a set apiece.