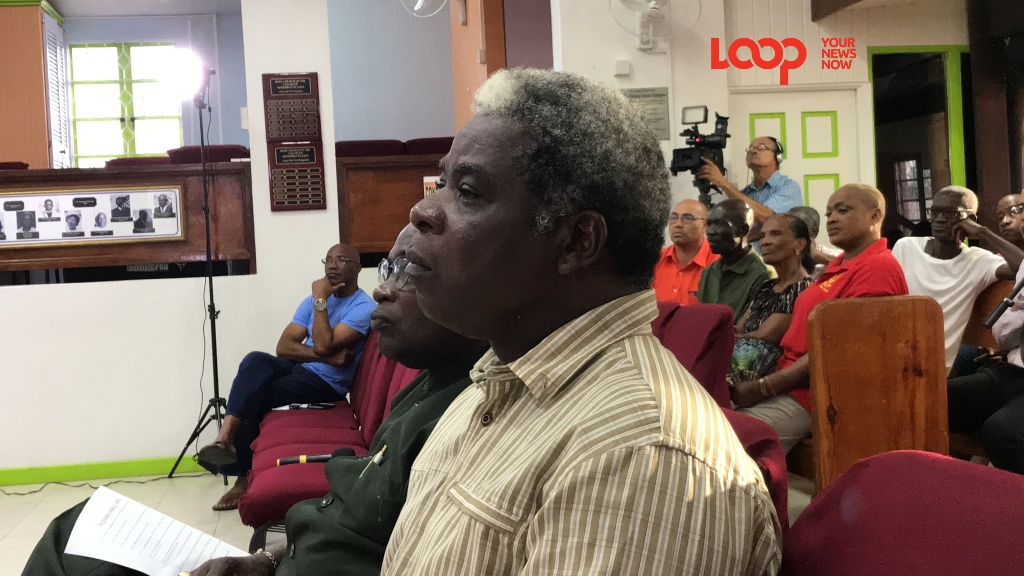 Attendees at the Town Hall meeting organised by the St. Philip South Branch of the BLP and the MP Indar Weir.

Police Senior Superintendent Bruce Rowe has given some residents in St. Philip South peace of mind, having assured that a particular Northerner who is known to the law courts and police is not now living in their Eastern parish.

Rowe said that the rumour is untrue.

At a St. Philip South Town Hall Meeting held at the Ruby Nazarene Church in Ruby, St. Philip over the weekend, to discuss the 'Impact of Crime', the President of the St. Philip South Branch of the Barbados Labour Party (BLP), Andrew Glasgow asked the burning question.

Glasgow, who was seated at the head table next to Agriculture Minister and Member of Parliament for St. Philip South, Indar Weir, asked the Senior cop to directly address the rumour that has some of the constituents uneasy with the hike in crime in the parish of St. Philip.

Seeking to ask the question without naming names or even calling nicknames, though from those gathered you could hear the aliases being whispered loudly, Glasgow said that he wishes to know if an "infamous" man from St. Lucy now resides in St. Philip.

Responding, Senior Superintendent Rowe said: "I can tell you sir, that is just a rumour.

"I'm not going to sit here and tell you that he may not come into St. Philip. But I can tell that that is just a rumour. We know for sure that he is not living in St. Philip"

Furthermore, he went on to explain that the person in question has strict bail conditions.

"He is on a programme from the court and we have to visit his residence, where he's supposed to be living and he has to report to a police station."

Rowe's assurance was meet with applause. Glasgow said he found the response "comforting" as well.

The rumour picked up speed and reach with each murder and shooting incident in St. Philip for 2019, especially over the last three months.

Rowe, who heads the South Division as Division Commander, told those gathered: "Crime in Barbados today is at a level that we have never seen, an unprecedented level..."

However, he went on allay fears by explaining that police are present throughout St. Philip - dressed and undressed, in marked and unmarked vehicles. He said he not only has patrols turning around the parish, but he also has the assistance of the tactical special units day and night and detectives are working round the clock to solve the crimes.

He took care not to say any particulars, because as he explained, "a lot of the crime is still under investigation" and as of Sunday, July 7, he said eight persons were in custody in his division in relation to one matter.