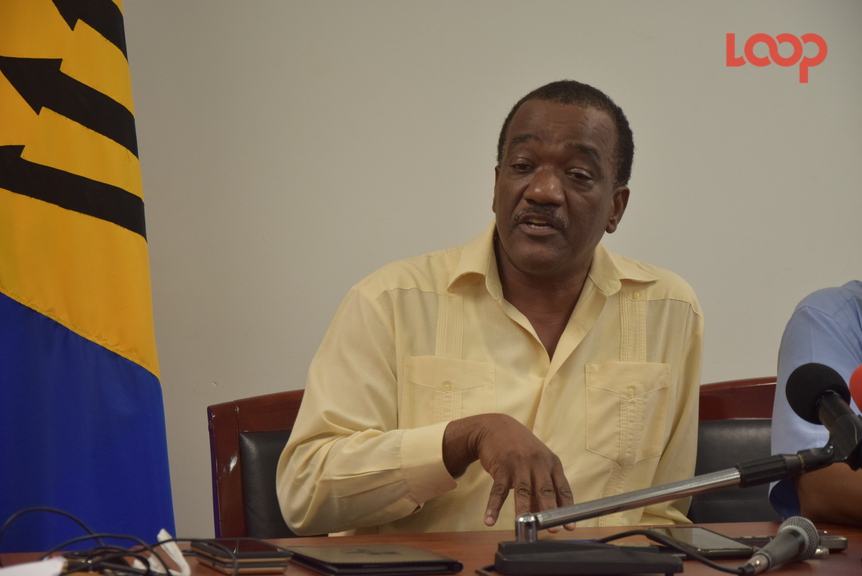 Minister of Health and Wellness, Col Jeffrey Bostic gives local media an update on the regional emergency meeting on the coronavirus.

The Barbados Government will not be issuing a travel ban for persons travelling to or from China.

Addressing the media this afternoon at the Ministry of Health, Frank Walcott Building headquarters, Minister of Health and Wellness, Col Jeffrey Bostic, stated that Government will not be following the likes of Caribbean territories such as Dominica, Jamaica and Trinidad and Tobago who have implemented travel restrictions on foreign nationals travelling from or to China because of the coronavirus.

Bostic's comments come following an emergency meeting on Monday with regional ministers of health and regional institutions such as CARICOM IMPACS, Pan-American Health Organisation (PAHO), Caribbean Disaster and Emergency Management Agency (CDEMA) as well as tourism body Florida Cruise Association and the Embassy of The People’s Republic of China.

The Minister of Health and Wellness identified that six Caribbean territories have closed their borders but Barbados would take precautionary measures to ensure the visitors and citizens were safe.

“We in Barbados made the determination based on evidence, science, and past history . . . that we were not going to go that [no travel ban] route; that we are going to follow the WHO [World Health Organization] and PAHO not to inhibit trade or travel but to significantly enhance the regime at our airport in terms of surveillance,” stated the Minister of Health.

Bostic also noted that due to travel restrictions to other Caribbean territories, travellers were seeking refuge in Barbados. He contested that this had the potential of becoming an issue.

“We have had at least five visitors from China who are destined for other locations in the Caribbean but because the borders were closed they ended up coming to Barbados. We recognize that this could become an issue, not only an issue in our capacity to handle those numbers should they become large, but also the logistical support that is required,” he said further revealing that the Minister of Foreign Affairs has spoken to the Ambassador of China on the matter.

The Minister of Health added since the alarm of the coronavirus, the Barbadian Government had been “on the ball” with their preparations at the ports of entry. He disclosed that additional military aid had been dispatch primarily to the Grantley Adams International Airport (GAIA). With the help of CARICOM IMPACS, Government would be able to get advanced passenger information prior to their landing in Barbados. This information would then be used to screen passengers and determine potential risks. Thermal detectors and portable infrared thermometers will be used by medical officers at the ports.

“We have been doing the necessary screening at the ports of entry particularly the airport at this point in time and then the port officials will determine the degree of risk involved and the degree of risk is determined by the origin of the traveller,” Bostic explained.

Those who are suspected to be infected will be analyzed for symptoms and quarantined for a period of 10 to 13 days. There are no reported cased of the coronavirus in Barbados but in the event of infection, the patient will be isolated at the Queen Elizabeth Hospital’s Enmore Complex.

Although the Caribbean remains within the low-risk category according to the Caribbean Public Health Agency (CarPHA) and PAHO, Bostic revealed that an educational campaign would be executed to properly educate the public about the coronavirus.

“We are going to put all our resources to work for the betterment of the citizens of this country by mounting a very comprehensive campaign. We can’t stop misinformation but we have everything in our power to be able to put out the correct information and to put it out there as often as we possibly can,” Bostic said.

“There have been about a dozen international incidents in terms of public health over the last 50 years and Barbados has never closed its borders not even with Ebola and we relied on our people and the competence and the collaborative people nature of the people we have at the ports of entry in keeping the country safe and we are confident with that,” he added.