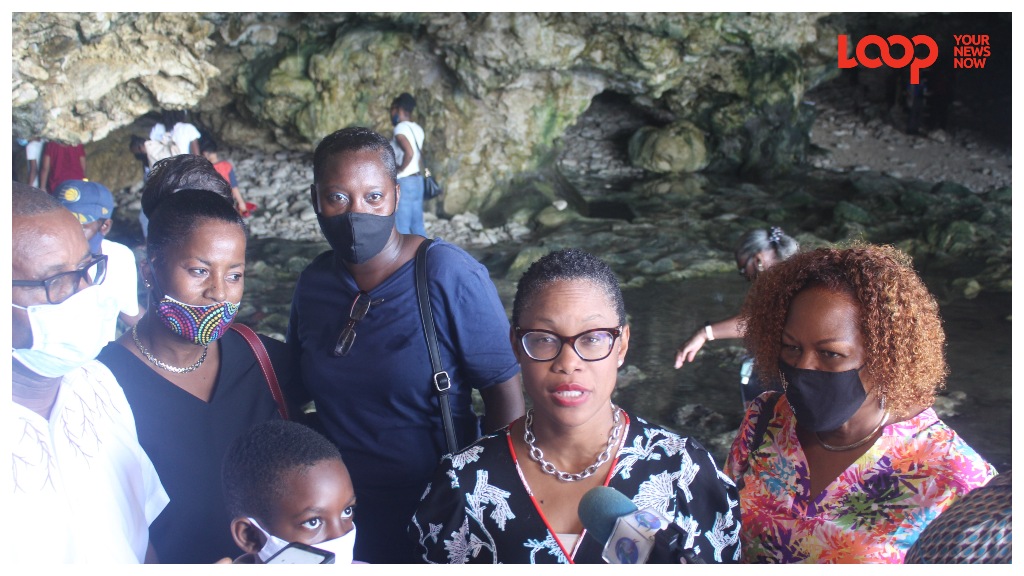 The “Barbados Uh Come From” initiative took a trip to the north of the island on Friday, September 4.

This time the marketing campaign made a stop at the island’s lone sea cave, the Animal Flower Cave.

The local attraction, with its picturesque windows to the sea located under the cliffs of North Point, St Lucy, took centre stage on Friday as Minister of Tourism and International Transport, Senator Lisa Cummins, along with a team from Barbados Tourism Marketing Inc (BTMI), continued the local domestic tourism tour.  The campaign was conceptualised to re-energise and reimagine the 21st century Barbados tourism product. It encourages locals to visit local attractions and establishment and also participate in other tourism-related activities, in an effort to support the industry which has been significantly impacted by COVID-19.

Yesterday, Minister Cummins was accompanied by a number of young campers, workers in the hotel sector as well as the Parliamentary Representative for the northern parish and Minister in the Ministry of Agriculture and Food Security, Peter Phillips.

In speaking to the press while exploring the cliff-side attraction, Minister Cummins explained that one of the key goals of the initiative was to expose and educate those within the tourism sector about local attractions so they would be better equipped to market them to visitors.

“We want Barbadians to see what our domestic tourism product offering looks like, so we are bringing them out but more importantly, and equally importantly, we want Barbadians to be able to sell what is ours to others and to share what we have with others who visit us in our home. When our hotel workers are back in their properties and when our restaurant workers are back to work and they are dealing with our guests in all the various inclinations, we want them to be able to answer questions like ‘where should I go?’ ‘what is Animal Flower Cave? I’ve heard about it, what else in the north?” she stated.

On journeying to the north of the island, the Minister spoke of the sighting of a large number of Black Belly sheep, using that as an example of something that was authentically Bajan. She hinted that things unique to the island could be used to conceptualise new products. “We are going to be continuing with our integration of our local attractions and local product into the development of new product offerings when the tourism sector reopens,” she said.

In explaining the rationale behind the “Barbados Uh Come From” initiative, the Minister reflected on a conversation where it was suggested that there was usually a disconnect between policy-makers and what was taking place ‘on the ground’.

“Very often we make policy in boardrooms and we are in our air-conditioned offices, we are in our air-conditioned cars and we are going to and fro our business meetings and we are making policy decisions about things that are actually ‘on the ground’. Animal Flower Cave, St Lucy and all the attractions in all of our parishes are ‘on the ground’ and we at the Ministry of Tourism, our teams are out as well, we are committed to ensuring that every policy and every decision we make is informed by what happens on the ground," she stated.

She continued: "We are making sure that we are out on the ground as well, our staff is rotating so that every week different members of staff are out so that they understand what they are talking about in a practical sense when we have decisions to make about marketing our country.”

The Minister went on to indicate that locals had a part to play in the domestic tourism product. “Our children are going back home and they are telling their parents and their parents are bringing their families and that becomes part of our domestic and community tourism,” she stated. Campers from the Fun Music Workshop and the Good Shepherd Anglican Church toured the local attraction yesterday.

Similarly, the inclusion of Tonia Blades and Cheryl Welch, both workers in the industry was important, the Minister suggested, as they were integral in marketing Barbados to visitors. “Many of the people who are working in this very sector have not been on the ground that they are representing in their offices and in their various products and services in the tourism industry,” Senator Cummins reiterated.

When asked, both the campers and workers who toured the cave yesterday indicated it was a pleasant experience and they would be excited to return.

In addition to local attractions the initiative will also include visits to small businesses around the island with a goal of ascertaining their current status and identifying any supporting technical aid the Ministry could lend in an effort to assist them become fully functional when tourist arrival numbers increase.