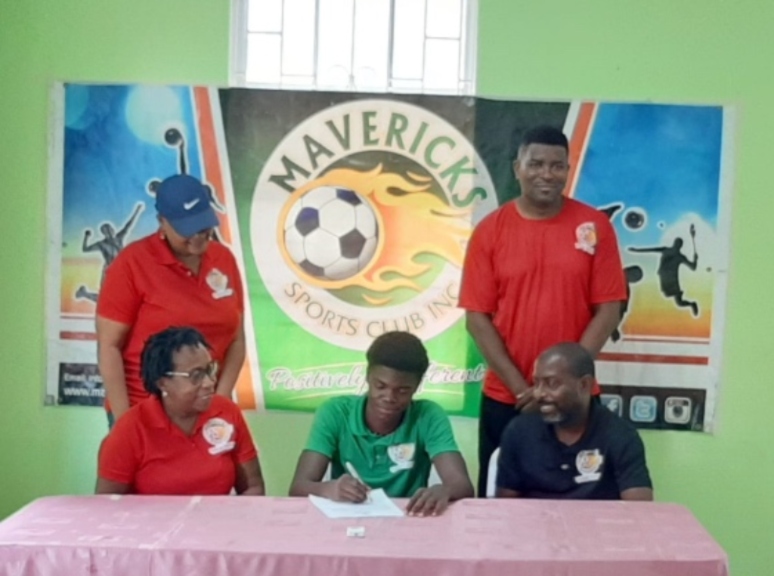 The Mavericks Sports Club Inc are finally reaping fruits of their labour.

Last weekend at the Police Sports Club, Mavericks announced that five of their premier athletes will be heading to the United States in January as the pioneers of their personal and social development programme; The Global Exposure Initiative.

Three females and two males have earned scholarships to the Southwest Virginia Community College, where they will continue their academic and athletic development.

National female footballers Felicia Jarvis and Marisa King, along with multi-disciplined athlete Cheyanne Burnett-Griffith, will feature for the “Flying Eagles” soccer team in the upcoming season, while Tre-Miguel Ifill and U20 utility player Jelani Chandler will ply their trade on the Men’s team.

Personal Development Officer Camille Spooner said the club is pleased with the results of their Global Exposure Initiative, which was officially launched in January in conjunction with club partner The Walter Rodney Foundation, a non-profit organization in the United States.

Spooner said the initiative has emerged after a number of trips to the United States and Canada where their members were exposed to new environments and cultures which enhanced their football skills, forged relationships and generally created well-rounded individuals.

According to Spooner the attainment of these scholarships is just the beginning, as the club intends to maximize all opportunities created through the programme.

“It is our dream through this initiative to see our members participate in exchange programmes with their North American peers at all age levels, while attending camps during the vacation period and short stints in the United States on attachment and soccer clubs and schools.

We want to see them gain scholarships to colleges and universities in North America and to participate in community and charitable work”, said Spooner.

These five players will join a list of Mavericks players who have attained soccer scholarships in the past; Tiffany White, Jeneva Millar, Najee Holder and Tia Briggs-Thompson.