Agrofest 2020 delivered the best in entertainment 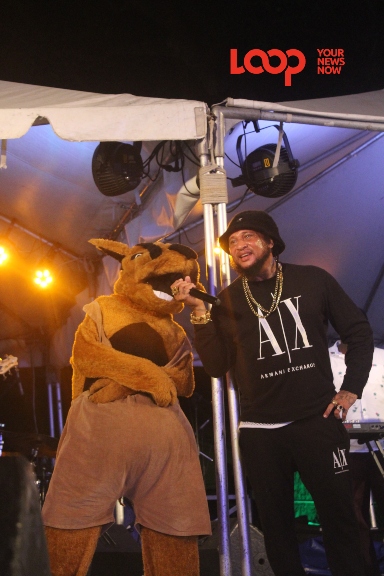 Peter Ram on stage with the Agrofest mascot

In addition to the best in produce and products, patrons of Agrofest also got a good serving of the best in entertainment this island has to offer with its Best of Crop Over soca show staged in Queen’s Park.

With a prompt 7 pm start, Kirk Brown, who also doubled as host, was the first artist to take to the stage. He performed a number of his tracks and was closely followed by Faith Callender. These two succeeded in warming up the crowd which had gathered.

Mistah Dale took the older ones in the crowd down memory lane with “Kay Lay Lay Pom Pom”. His very own “Soca Junkie” and “Fetulous” only added to the mounting festive atmosphere.

When Soca Monarch Mikey exploded on to the stage he got nothing but love. He performed many of his 2019 releases and those present showed him that they were all one big “Feting Family”, singing along in unison when he launched into his 2018 hit.

“Daddy” landed next. As usual this diminutive performer was met with welcoming screams and as he delivered a selection of his tracks the audience chimed along to every one.  Mole took on the role of choir director as he took patrons through the paces to one of his newest releases for 2020 and had them loudly singing “Chirping for the Birds”.

Peter Ram got lots of love as he opened his set with “Crop Over Good Morning”. Although his repeated requests to remove the fence to get closer to ‘his people’ could not be facilitated it did not stop the festive atmosphere. The performer was later joined on stage by Kirk Brown and the duo collaborated to deliver a dancehall/dub set that was met with the appreciation of all.

Lil Rick brought the soca show to an end. His animated movements and interaction with the mascot of the agricultural show left those in the audience in hysterics. At one point Rick feigned embarrassment at having been outdone by the mascot proclaiming: “This is very baaaaad”, in his best sheep impression.

The soca star ended the show on high just after the 9.00 scheduled end time.

4K The Band was exceptional in backing the performers and the members of Riddim Tribe only added to the quality show which culminated Saturday’s activities at Agrofest.

Agrofest expo not only limited to agriculture