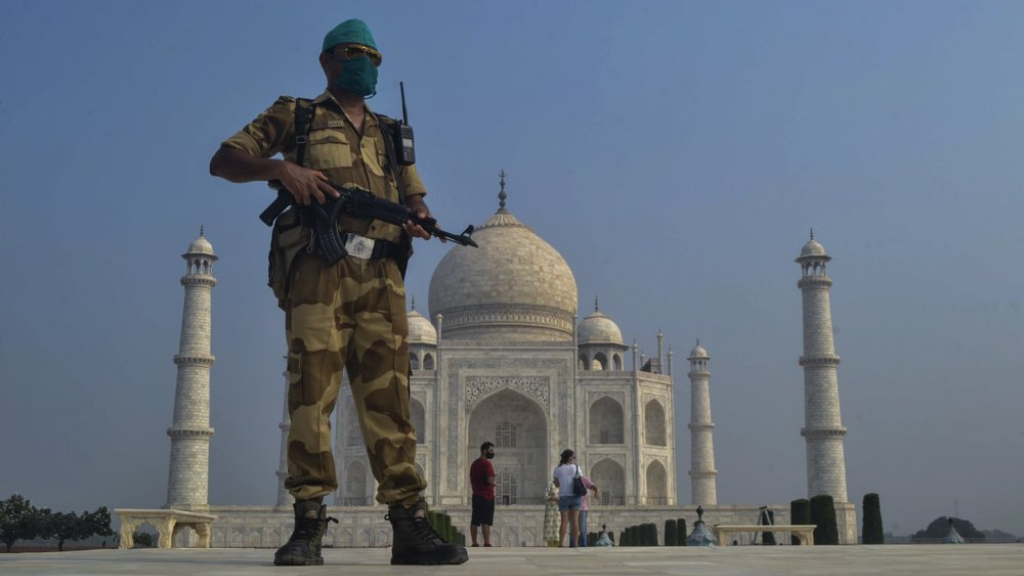 A paramilitary soldier wearing a mask stands guard as the Taj Mahal monument is reopened after being closed for more than six months due to the coronavirus pandemic in Agra, India, Monday, Sept.21, 2020. (AP Photo/Pawan Sharma)

India recorded nearly 87,000 new coronavirus infections in the past 24 hours as it edged closer to the United States in having the most reported cases in the world.

On Monday, India's Health Ministry also reported 1,130 deaths in the past 24 hours, taking the total reported fatalities to 87,882.

India now has over 5.4 million reported cases, and the nation of 1.3 billion people is expected to become the pandemic's worst-hit country within weeks, surpassing the United States, which has 6.8 million.

Over 60 per cent of the active cases are concentrated in five of 28 Indian states, Maharashtra, Karnataka, Andhra Pradesh, Tamil Nadu and Uttar Pradesh and experts are worried about surges in smaller cities and villages, where access to healthcare is patchy.

India's economy contracted nearly 24 per cent in the second quarter, the worst among the world's top economies. To offset the economic crisis, the government has been relaxing virus restrictions despite the surging cases.

The 17th century, white marble Taj Mahal reopened for national and international tourists Monday after a gap of six months. Wearing masks is compulsory, and thermal screening and physical distancing are among other virus restrictions being used.

— All remaining virus restrictions will be lifted across much of New Zealand from late Monday with the exception of the largest city, Auckland, which will continue to have some restrictions for at least another 16 days.

The nation of 5 million people reimposed some restrictions last month because of the Auckland outbreak, which now appears to be under control. Under the plan, maximum gathering sizes in Auckland will be increased from 10 to 100 on Wednesday and then caps removed two weeks after that.

"Whilst we have reasonable confidence we are on the right track, there is still a need in Auckland for that cautious approach," Prime Minister Jacinda Ardern said. Health authorities reported no new cases on Monday.

The number of active COVID-19 cases is 62, with 33 of those from community spread and 29 among quarantined returning travellers.

— South Korea's daily virus tally has stayed below 100 for a second consecutive day, maintaining a slowing trend in fresh infections. The Korea Disease Control and Prevention Agency said Monday the 70 new cases added in the past 24 hours took the country's total to 23,045 with 385 deaths.

The drop to double digits on Sunday was the first in about 40 days. South Korea conducts fewer tests on weekends. But its recent virus resurgence has been on a downward trajectory amid strong social distancing rules since its daily tally surpassed 400 in late August.