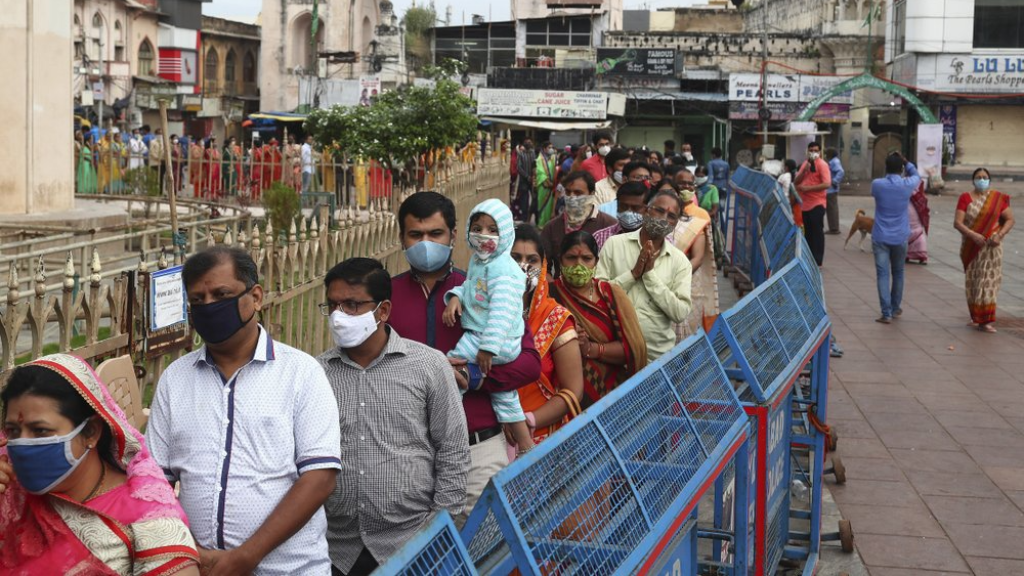 Indians wearing face masks as a precaution against the coronavirus stand in a queue to offer prayers at Bhagyalaxmi temple near Charminar ahead of Diwali, the festival of lights, in Hyderabad, India, Thursday, Nov. 12, 2020. Health officials have warned about the potential for the coronavirus to spread during the upcoming religious festival season, which is marked by huge gatherings in temples and shopping districts. (AP Photo/Mahesh Kumar A.)

The surge of 8,593 cases in the nation's capital is the highest for any major Indian city and comes as people crowd shopping areas ahead of Divali, the Hindu festival of lights, on Saturday.

Deaths, too, are climbing again, with 85 in New Delhi in the past 24 hours. Deaths are a lagging indicator of the virus due to long periods of illness and medical treatment.

India's confirmed cases -- currently the second-most in the world behind the United States – has exceeded 8.6 million.

The Delhi government says cases are projected to rise to nearly 12,000 a day by the end of November and chief minister Arvind Kejriwal has written to the federal health ministry stating that its hospitals would need over 20,000 more beds to treat patients.

— Health officials in New Zealand have asked people who work in central Auckland to stay home on Friday or limit their movements while they continue to investigate a coronavirus case from an undetermined source.

Authorities say they're urgently investigating the recent movements of the Auckland student who works at a clothing store. They say the student lives next door to a hotel where people arriving from abroad are being quarantined, some of whom have tested positive over recent weeks.

COVID-19 Response Minister Chris Hipkins says authorities are testing the genome of the student's case to see if there is a connection to the hotel cases, and they will announce Friday whether they'll be changing New Zealand's alert levels.

The case comes as a blow to a country which has been largely successful in its attempts to eliminate community spread of the virus. Hipkins says the large response to a single case "reflects the fact that we are in a very fortunate position compared to other countries around the world, and that we're not dealing with community transmission cases on a regular basis the way that other countries are."

— A South Korean court has granted bail for a religious sect leader who was arrested in August over allegations that he disrupted the government's anti-virus response after thousands of COVID-19 infections were found among worshippers in February and March.

The Suwon District Court on Thursday cited concerns about the health of 88-year-old Lee Man-hee, chairman of the Shincheonji Church of Jesus, and said he was no longer a serious threat to destroy evidence considering the prosecution's progress in investigation.

The court required Lee to wear electronic tracking devices and not to leave his home. Prosecutors have accused Lee and his church of violating infectious disease laws by deliberately hiding some of the church's membership and under-reporting its gatherings to avoid broader quarantines.

Lee and his church have steadfastly denied the accusations, saying that the church has been properly cooperating with health authorities. More than 5,200 of South Korea's 27,942 coronavirus cases have been linked to the church.

— Sri Lanka's Central Bank has extended a debt moratorium given to coronavirus-hit businesses and individuals by another six months as the disease continues to spread in the island nation.

The bank said those engaged in tourism, apparel, tea, spices, plantations and other sectors adversely affected by the virus are eligible for the moratorium. A previous six-month debt moratorium expired in September.

The new moratorium will be effective from October 1 to March 31 next year. Many areas of the economy, including tourism, have been badly affected by COVID-19. No foreign tourists have been allowed to enter the country since April.

Tourism accounts for about 5 per cent of Sri Lanka's GDP and employs about 250,000 people directly and up to 2 million people indirectly.

The disease has surged in Sri Lanka since last month, when two clusters emerged, one centered at a garment factory and the other at a major fish market. Confirmed cases from the two clusters grew to 11,857 on Thursday. Sri Lanka's total reported cases reached 15,350 on Thursday with 46 fatalities.

— Japan's government has decided to maintain limited seating at major athletic and cultural events for another three months amid a resurgence of coronavirus infections, and is asking people to increase caution.

Experts are calling for reduced social and economic activity to avoid an explosive increase in infections. At a government task force meeting on Thursday, Economic Revitalization Minister Yasutoshi Nishimura said daily new cases have shot up in recent weeks and are nearing the record of more than 1,600 set in August.

On Thursday, 1,546 new cases were reported, pushing Japan's total to 111,711 cases, including 1,851 deaths. "A major expansion of infections seems to be starting," Nishimura said. "We are increasingly concerned and we have to prevent an explosive increase. If the uptrend continues we will have to take even tougher steps."

In addition to recent spikes reported in Tokyo, Osaka and the northern main island of Hokkaido, infections are spreading in suburban areas where medical systems are more vulnerable, experts said.