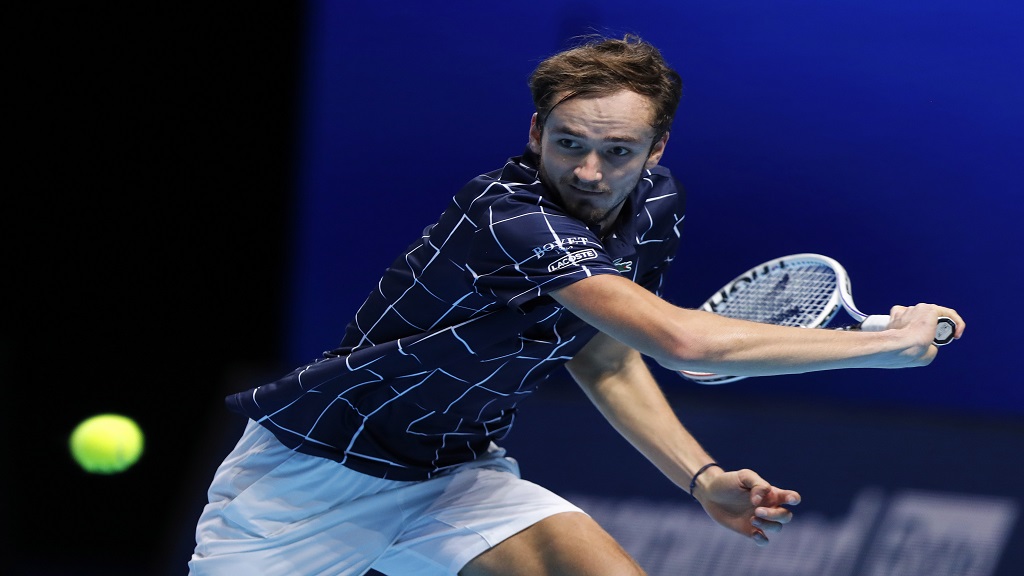 Daniil Medvedev of Russia plays a return to Novak Djokovic of Serbia during their tennis match at the ATP World Finals tennis tournament at the O2 arena in London, Wednesday, Nov. 18, 2020. (AP Photo/Frank Augstein).

Daniil Medvedev produced a near faultless performance to book his place in the last four of the ATP Finals by comfortably beating Novak Djokovic in straight sets on Wednesday.

Medvedev has typically presented Djokovic with more problems than most on the ATP Tour, though the world number one went into this Group Tokyo 1970 clash with a 4-2 edge in their head-to-head record.

However, Djokovic looked bereft of answers as Medvedev cruised to a 6-3, 6-3 win at the O2 Arena, making only 12 unforced errors in 18 games.

It marked the first best-of-three-sets match between the two not to go the distance since Djokovic's triumph at Eastbourne in 2017, with Medvedev now having won three of their last four meetings.

Djokovic, whose match with Alexander Zverev on Friday will decide the other semi-finalist from the group, was under pressure early on and staved off a pair of break points in the third game.

Two more went begging for Medvedev in the seventh before the pressure eventually told at the fifth attempt.

An uncharacteristically sloppy Djokovic surrendered the set with his fourth double fault and the momentum stayed with Medvedev thereafter as he raced into a 3-0 lead in the second, saving the only break point he faced in the process.

Service games became increasingly routine for Medvedev, with Djokovic posing little threat, and an authoritative forehand rounded off one of the more impressive wins of the world number four's burgeoning career.

"To be completely honest I'm sure he didn't play his best today," Medvedev said of Djokovic's performance in his on-court interview.

"It happens for everybody, the big three are champions because it happens less for them than for other players, still tough to beat them on their bad days.

"He was a little bit slower than usual, serving less good, I knew I had to take my chances. I think he had only one break point. Great match for me."