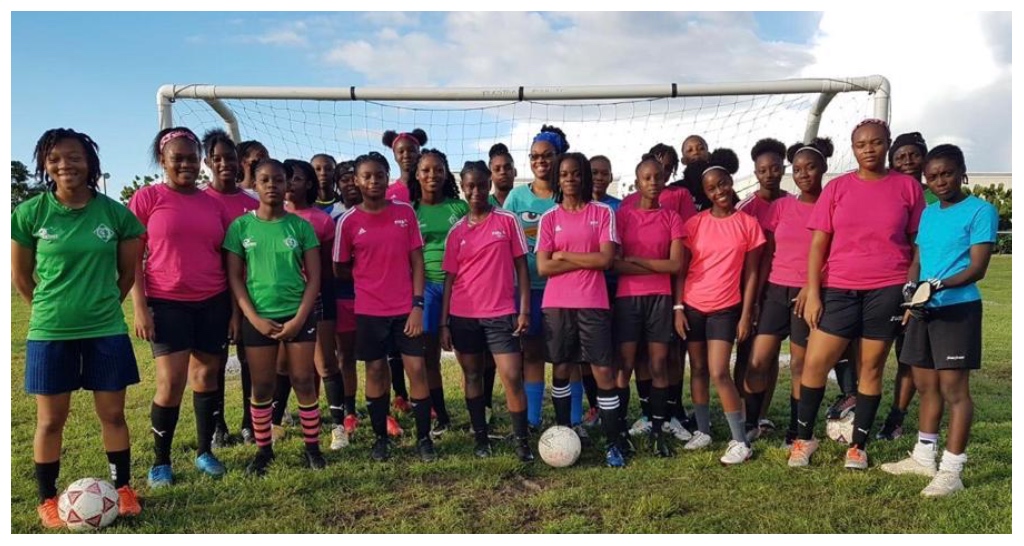 This was the message shared and attached to the Kickstart Rush Football Club event held on Saturday at the club grounds in Wildey.

The Kickstart Rush Football Club hosted an exclusively female football event to celebrate the eighth anniversary of the United Nation’s International Day of the Girl.

Players and patrons braved the brief showers to celebrate and support more opportunities for girls and increase awareness of gender inequality while rejoicing the triumphant emergence of females amid various adversities.

Pioneers of the local female game and former national players Kerry Trotman and Ytannia Wiggins, who were in attendance, gave good reviews of the event, stating it is a positive sign and can only support what the national association is doing.

“I think yesterday went well. It was good to see the number of new players involved in football.

There was a nice mixture of talent and experience, and despite the differing levels of players yesterday, I can truly say they enjoyed it thoroughly. I feel like these events can help grow the interest of the female more into football,"  said Trotman.

Trotman’s sentiments were echoed by current national U20 men’s midfielder and coach of the Pinelands women’s team Devonte Richards.

Richards said he was pleased to see the number of females who came out to play, and it is encouraging for the growth of the game.

“It was a pleasure to watch female footballers come out and enjoy the beautiful game of football while being able to celebrate a very important day for females around the world.

I think it’s a great event and should be the start to something great for the development of female football in Barbados."

The event organizers expressed gratitude to all of those who contributed to the experience and indicated that this event is not be their last, and interested persons may stay connected to their social platforms on Facebook and Instagram; @Kickstartrush.