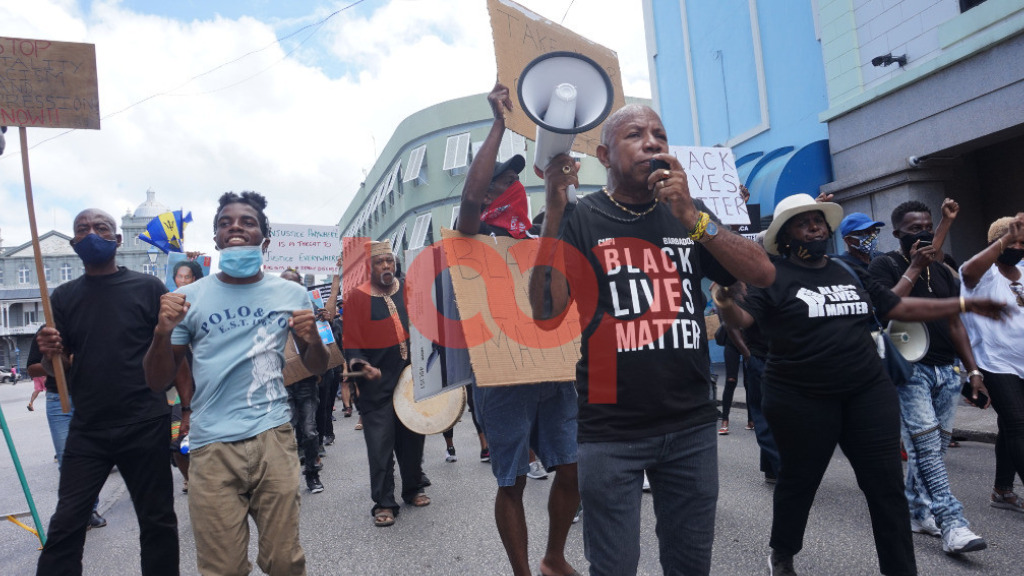 Protestors in Barbados called vehemently for the removal of Lord Nelson's Statue during the second Black Lives Matter march on the island.

This time the event went through Bridgetown.

Hundreds of peaceful protestors made their way through Bridgetown (June 13), some holding placards and others just chanting to the cries of 'No Justice, No Peace!' and 'Black Lives Matter'.

The planned solidarity protest was orderly carried out, as the Royal Barbados Police Force (RBPF), accompanied the throng of individuals lead by David Denny, General Secretary of the Caribbean Movement for Peace and Integration (CMPI).

Megaphone in hand Denny lead protestors from Kensington Oval to the heart of Bridgetown through Broad Street, but before heading on to Independence Square, he made a special plea to the procession outside the entrance of the Parliament buildings.

"I want everybody to stop and take a knee."

Denny called on protestors to take a knee in solidarity with those in the United States of America and saying 'I Can't Breathe' as well as telling protestors 'Take down Nelson'  with ensuing chants of both from the hundreds in attendance. 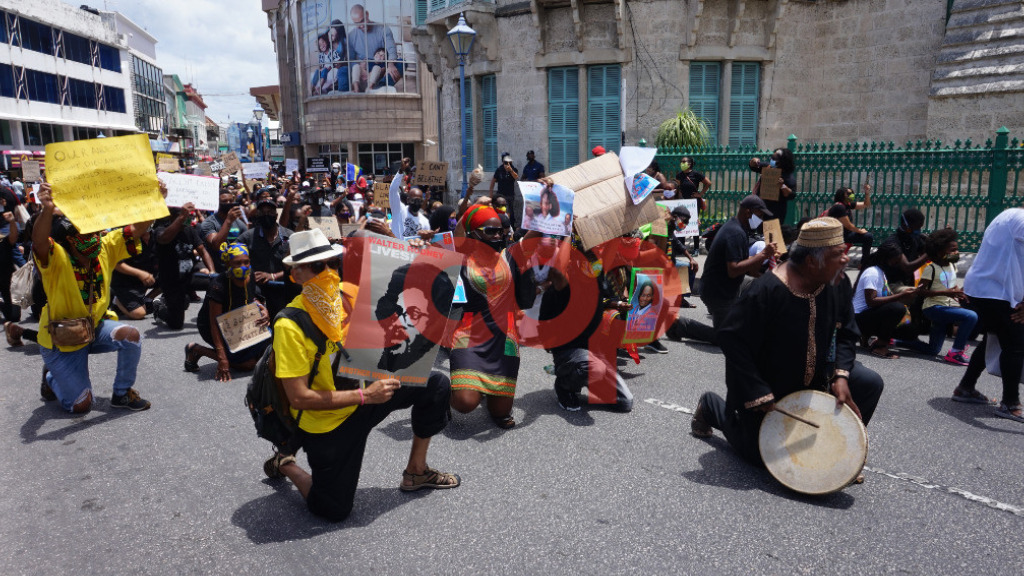 The protest then made its way across the bridge and then onto Independence Square where the CMPI General Secretary led the speeches to culminate the protest action. 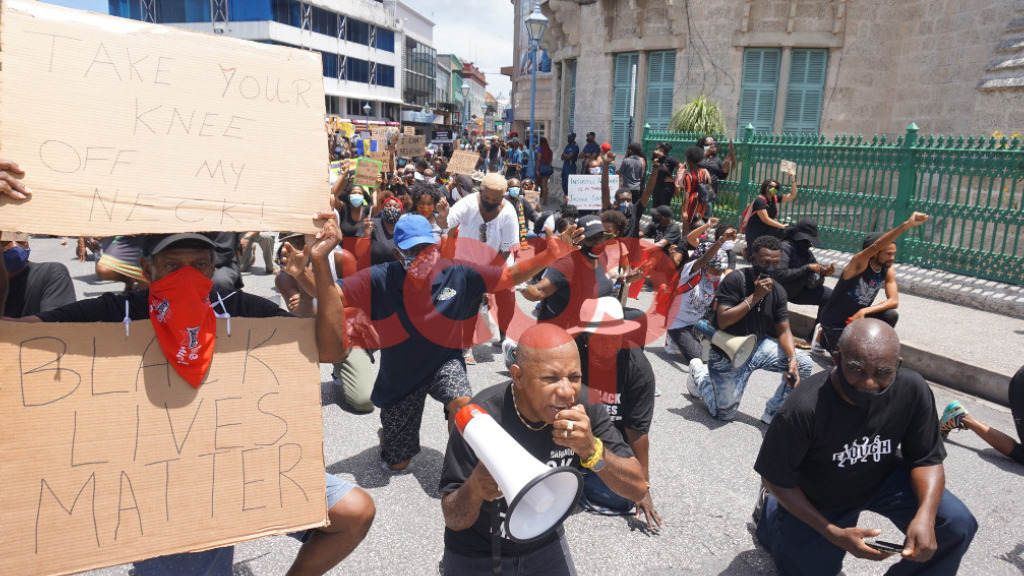 Denny used this opportunity to say that he intended to call for better and more just laws in the country. He also made another plea for the removal of Lord Nelson from Heores Square.

"We are here today to also express our position against racism and against exploitation of black working-class people. Comrades and friends, we have to make a number of demands on our Government because racism is right here in Barbados.

"It is not right that we should have a National Heroes Square with a statue of Lord Horatio Nelson in it." David Denny said. Nelson's location was previously called Trafalgar Square. 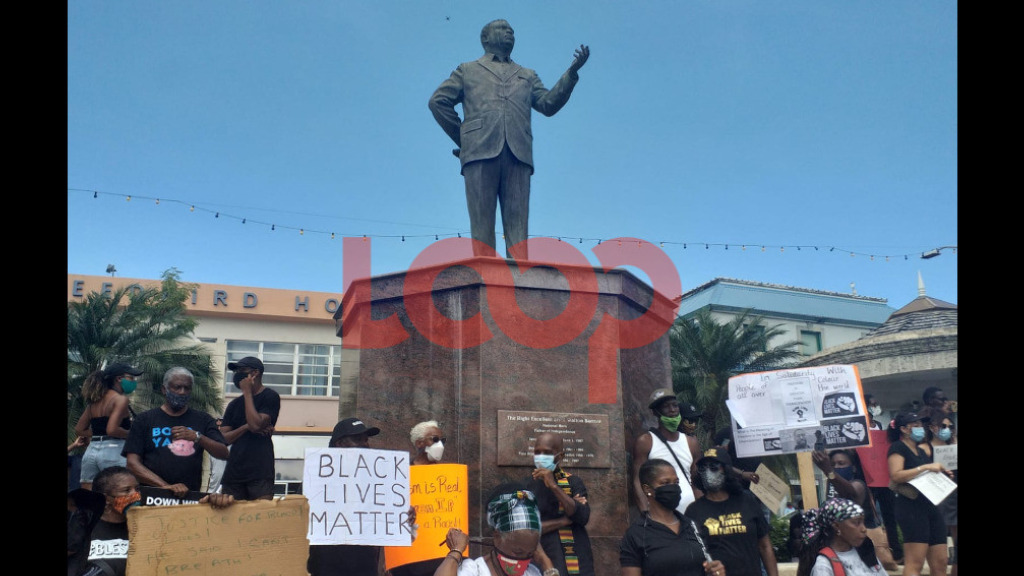 Following Denny was Environment Minister Trevor Prescod, who went on to speak in solidarity with the protest action and who was pleased with the number of young people present that were willing to take up the fight for Black rights.

"I stand as a Pan-Africanist 'til the end of time and I give you my unwavering commitment that I will not be in Parliament to turn the clock back.

"I often would ask where are the young people that will fight for the future of black people? And I thought there were very few, but I am thankful to all of you this morning for coming out."

Unfortunately for those in attendance, the climax was again interrupted as Royal Barbados Police Force called for what was deemed a premature end to the proceedings. This move again caused some disruption and brought the proceedings to an eventual close but not before some calls from Denny to possibly continue protest action yet again. 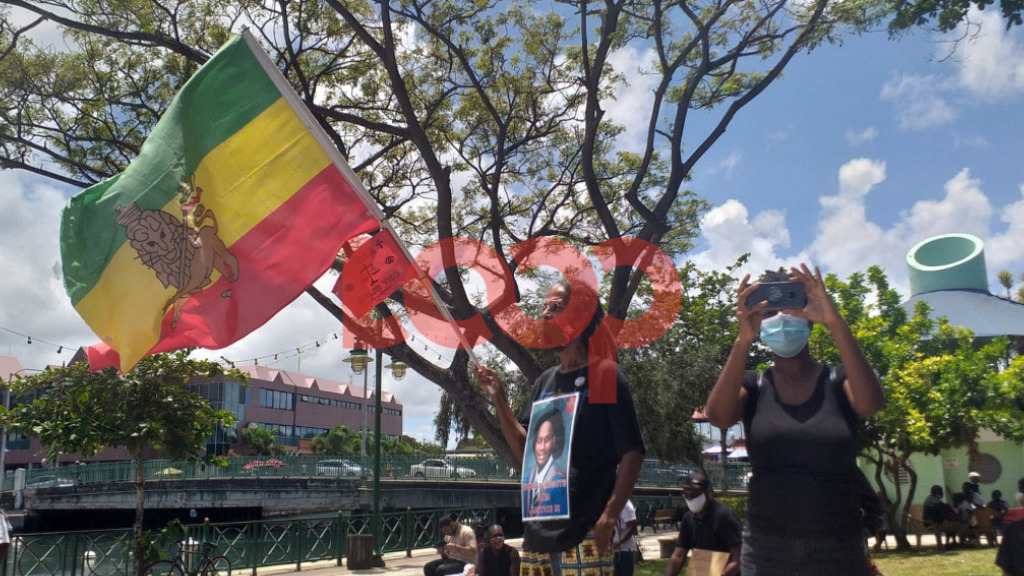