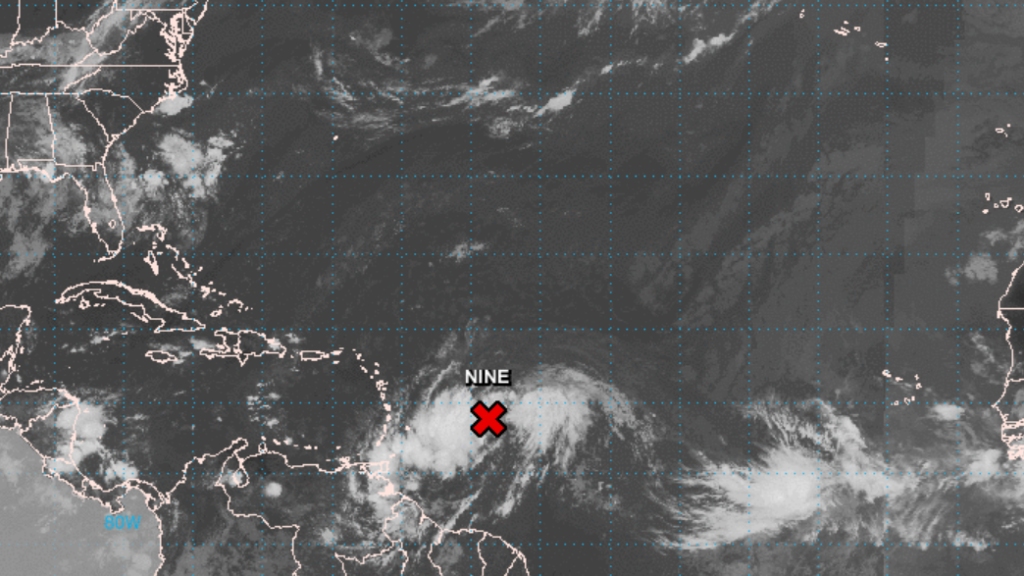 In 48 hours the newest weather system being monitored by the Barbados Meteorological Services (BMS) has moved from over 2,500 kilometres off Barbados to less than 500 kilometres away.

A hurricane hunter is being sent to investigate this latest and nearest weather system heading West.

BMS has been monitoring this system since weekend and continues to closely monitor the progress of an area of disturbed weather now located near 12.5N 56W. This update came at 12.35 pm (July 28).

The BMS said the system is moving westward near 15 to 20 mph. A reconnaissance aircraft is scheduled to investigate the system this afternoon.

An elongated area of low pressure located about 500 miles east of the Windward Islands is producing a wide area of showers and thunderstorms.

Although recent satellite imagery suggests that the system does not yet have a well-defined center, data from NOAA buoy 41040 indicate that the system is producing winds near tropical-storm-force.

The NHC said that the Air Force Reserve Hurricane Hunter aircraft is scheduled to investigate the system this afternoon  to provide more information about the current state of the disturbance.

WEATHER INFORMATION STATEMENT #6 FOR BARBADOS from the Barbados Met Office

Current Situation: Convection associated with the system during the course of the morning has continued to show slow signs of improvement, with scattered deep convective clusters persisting mainly on the western side of the system. However, the system remains elongated with a distinctive northeast through southwest orientation. This creates a challenge in forecasting where along the elongated circulation the system will consolidate its center. Furthermore, as with developing systems of this nature, it would not be surprising if there are multiple centers as it becomes better organized. There are presently no watches or warnings in effect for Barbados, however some moderate to heavy showers and occasional gusty winds could move across Barbados this evening and into Wednesday.

Intensity Forecast: As the system maintains its westward motion, some slow but gradual development is forecast and a tropical depression or tropical storm is likely to develop over the next 24 to 48 hours.

Track Forecast: There hasn't been any significant change in the forecast track from the previous 6am statement. There is still currently good agreement on the feature passing just north of Barbados late Tuesday night and into early Wednesday morning. It is highly advisable that all Barbadians closely monitor the progress of this system.

Key Messages: Rainfall accumulations of 25 to 75mm (1 to 3 inches) with isolated higher amounts are likely as this system traverses the area. In addition, a small craft warning is in effect for above normal swell heights from 6PM today 28th July, 2020.

Recommendations to the public: Stay on high alert for updates from the BMS on this system over the next 12 to 24 hours. Depending on where the system consolidates its center, a warning may be issued for Barbados at short notice.

BMS: 90 per cent chance of system heading towards C'bean becoming a TS

What is a Hurricane Watch?