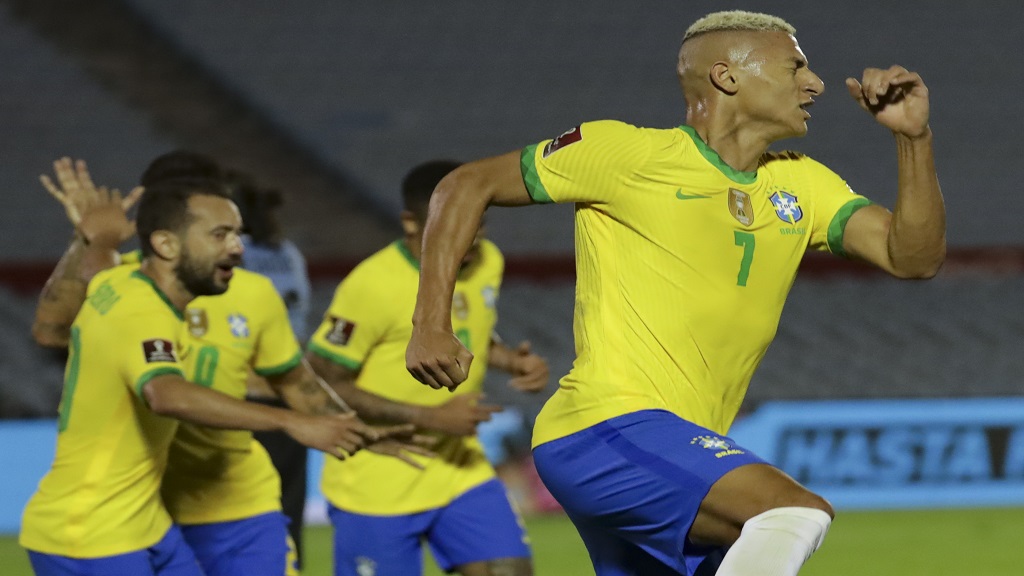 Brazil's Richarlison celebrates after scoring his side's 2nd goal during a qualifying football match for the FIFA World Cup Qatar 2022 against Uruguay at the Centenario stadium In Montevideo, Uruguay, Tuesday, Nov. 17, 2020. (Raul Martinez/Pool via AP).

Brazil extended their winning streak to four matches by beating Uruguay 2-0 on Tuesday to lead South American World Cup qualifying. Argentina will end 2020 two points behind in second spot after a 2-0 win at Peru.

Arthur scored in the 34th minute, his first goal for Brazil, and Richarlison doubled the lead in the 45th. Argentina's victory came after goals from Nicolás González in the 17th minute and Lautaro Martinez in the 28th.

The archrivals will face off in Brazil on March 30, the second game back after the qualifying tournament resumes.

Third place Ecuador, the surprise of the World Cup qualifying campaign, routed Colombia 6-1 and now have nine points from four games. Paraguay are in fourth spot after a 2-2 home draw with Bolivia. Uruguay are in fifth on goal difference.

The top four teams will automatically qualify for the 2022 World Cup in Qatar. The fifth-place team will go into an inter-continental playoff.

Brazil and Uruguay had trouble assembling their teams because of injuries and COVID-19. Among those that did not play in Montevideo were Neymar and Philippe Coutinho on the Brazilian side, and Luis Suárez and Federico Valverde on the Uruguayan.

Uruguay started strong, with striker Darwin Núñez hitting the bar in the 4th minute after beating right-back Danilo. It was the best chance the hosts had in the match.

Brazil, coming off a lackluster 1-0 victory over Venezuela last week, had more control and pace than Uruguay, which were coming off a 3-0 win over Colombia.

That difference started to show when Arthur took a shot from the edge of the box, the ball deflected, and ended in the back of goalkeeper Martin Campaña's net.

Brazil nearly doubled the lead two minutes later with a crossed shot by Roberto Firmino, saved by Campaña. Brazil's persistence paid off at the end of the first half when Richarlison's header from Renan Lodi's cross made it 2-0.

Uruguay hit the bar again two minutes later with a header by Diego Godin, but offered little resistance in the second half. The hosts were depleted further when veteran striker Edinson Cavani was sent off after a harsh tackle on Richarlison with 20 minutes remaining.

“It is always hard to restart, our rivals already have a map of our team,” Brazil defender Thiago Silva said after the match. “But Brazilian soccer is always keen to renovate.”

The match in Lima took place without any chaos in the streets nearby despite a political crisis in Peru since President Manuel Merino resigned this week. The country’s authorities assured South American football body CONMEBOL and FIFA that the game was safe to play.

Once more striker Nicolás González was one of the best in Lionel Messi's team.

He opened the scoring with an angled left-foot shot after an assist by Giovani Lo Celso. And he started the play that allowed Leandro Paredes to assist Lautaro Martinez, who dribbled past goalkeeper Pedro Gallese to make it 2-0.

Argentina coach Lionel Scaloni picked González as a starter after using him as an improvised left-back in the disappointing 1-1 home draw against Paraguay last week — González also scored in that match.

Argentina didn't face much pressure from Peru in the second half, in another poor performance of the strikers picked by the home team to replace injured Paolo Guerrero. Neither Gianluca Lapadula nor Raúl Ruidiaz were capable of troubling the visitors.

The only downside for Argentina was the suspension of defender Nicolás Otamendi after a second yellow. He will miss the next game when qualifiers restart.

“We needed this victory after the match we played the other day,” Messi said, in a reference to the draw against Paraguay. “From the start, we played a great game, the goals came and we did create a lot of opportunities."

Ecuador opened the scoring in the seventh minute when Robert Arboleda shot from close range. Two minutes later, they doubled their lead when Colombia's high defensive line was caught off guard and let Ángel Mena calmly finish in front of goalkeeper Camilo Vargas.

As Colombia tried to recover, Ecuador added a third when Michael Estrada just pushed the ball to the back of the net after a low cross from the left-wing in the 32nd minute.

Xavier Arreaga made it 4-0 in the 39th minute also from close range.

Colombia managed to score from the spot with James Rodríguez at the end of the first half, giving some hope to the visitors.

But the second half was also friendly to Ecuador, which missed several opportunities and had a goal disallowed by video review before they scored the fifth: Gonzalo Plata in the 79th minute. Seconds later, he was sent off after getting a second yellow.

Despite being one man down, Ecuador scored once more in added time, on a free kick taken by Pervis Estupiñan.

Colombia have four points and are struggling in qualifying. Coach Carlos Queiroz told a news conference he was responsible for the defeat in Quito and urged supporters to be patient.

“Colombia players and fans need to know that these players will bring a lot of glory to Colombia,” he said. “We ask for tolerance and understanding.”

Also on Tuesday, Venezuela beat Chile 2-1 to get their first points in four matches, and Paraguay and Bolivia drew 2-2 in Asuncion.

Luis Mago opened the scoring for Venezuela in the ninth minute. Arturo Vidal equalised six minutes later. Salomon Rondón netted the winner for the hosts in the 81st.

Chile have four competition points, one ahead of Venezuela.

At Asuncion, Angel Romero opened the scoring for Paraguay from the penalty spot in the 19th minute but Bolivia rallied to take a 2-1 halftime lead after Marcelo Martins and Boris Cespedes scored in the five minutes before the break.

Alejandro Romero's equalider in the 72nd ensured Paraguay earned a point and moved to fourth position in qualifying with six points. Bolivia are last in the 10-team standings with one point.

The fifth and sixth games in South American World Cup qualifiers will be played in March.

Neymar to travel for World Cup qualifying despite injury