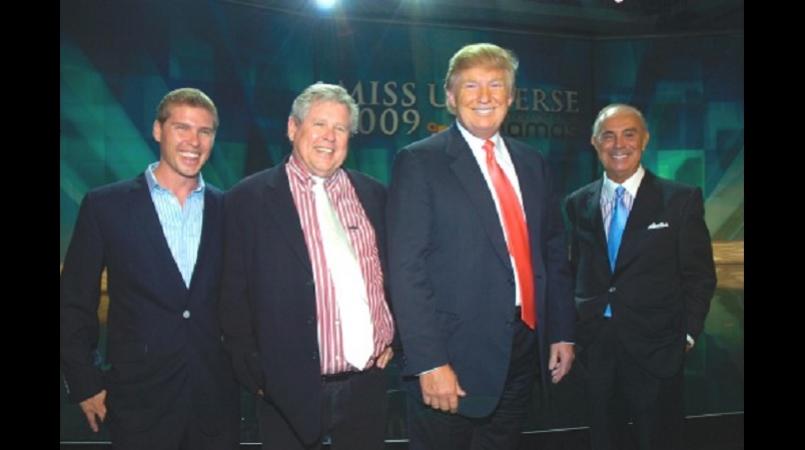 Jamaican hotel mogul Gordon "Butch" Stewart says the island has no need to fear the incoming Donald Trump administration of the United States.

Trump pulled off an upset win over Democratic rival Hillary Clintion in elections last November to choose America's 45th president. His win has been greeted with concern by Jamaicans at home and abroad who don't know what to expect from the US President-Elect who campaigned on a hard-line immigration stance and attracted many right wing extremist.

However, Stewart, who has known Trump for some two decades, said the US President-Elect is "by no means crazy, prejudiced or a bigot". In fact, he said he thinks a Trump administration  "will be great for all of us".

Stewart made the remarks in a letter to the editor of the Jamaica Observer newspaper, which he owns. The letter, under the headline "A New Year with great possibilities... and no need to fear Trump", was accompanied by a photo of himself and his son, Adam, with Trump at a function in 2009.

See the letter in full below.

We here in Jamaica and the Caribbean are about to embark on a New Year, one which offers extraordinary opportunities and possibilities for those who dare to dream big.

I would like to encourage all of our countrymen to reach out with both arms stretched wide for a future filled with hope, a chance for new beginnings and the range of opportunities available to us in measures I believe have never been seen before.

I am aware that many among us are labouring with fear and apprehension about the new United States President-elect Donald Trump. I, personally, think a Trump Administration will be great for all of us. I have known him since the 1990s and our paths have continued to cross. While he, like all of us, has his faults, a great many of the things the mainstream media say about him are just not true.

The Donald Trump I know is by no means crazy, prejudiced or a bigot. He is probably the most patriotic, nationalistic American I have ever met. He is always engaging and respectful. He is a well travelled individual from New York and someone I regard as a highly international man. He is not a politician and so he does not polish his words as well as a seasoned politician would. Instead, he shoots from the hip and says it like it is.

I believe he means to do the best he can for the United States and that he will be good for Jamaica and the Caribbean region. Each time that I met him I found him to have a tremendous respect for our region. He was particularly very inquisitive about Jamaica and always wanted to know about life in our country. In a historic gesture, within the first week after the election, Vice-President-elect Mike Pence called our Prime Minister Andrew Holness. That immediate, warm, welcoming telephone call is a signal that this new US Administration intends to keep Jamaica in its focus.

It can be argued that anybody who is as successful as Mr Trump is has to be extremely talented. As a major developer in Manhattan, he faces a multitude of conflicts, political games and bureaucracy on a daily basis that, by overcoming, shows his genius.

I really don’t think there is anything to fear about his presidency. In fact, I believe he will end up being one of the best American presidents ever.

In the recent US elections, Mr Trump heard a voice that no one else did and his fellow Americans responded. For that he was rewarded and elected as president and commander-in-chief. It is the kind of presidency that the world needs now. When America has robust economic growth, the world grows. Right now, the continued low growth is not enough to drive the global economy.

In my view, the Jamaican economy will benefit greatly from his Administration and I believe that a lot of people are going to be surprised at the results he will achieve. I have been struck by the fact that he is a man of conviction and that comes across in all his conversations. The amount of work he has done since his election is an indication of the kind of president he will be.

Jamaicans are a talented, hard-working and optimistic people and, as we start the New Year 2017, we must have a mind to grasp the possibilities that will come our way. I would like to take this opportunity to wish everyone a Happy New Year and hope that 2017 will be your best year yet. And I hope, like everyone else, that Jamaica reaps the much-needed prosperity for all our citizens who deserve so much better than the decades of low or no growth.