Skip to main content
Breaking News |
Coronavirus cases in the Caribbean as of August 10 at 8 am: 116,255
It's the 3rd time a hurricane season has been named 'extremely active'
60 per cent chance of a tropical depression this week
PM Browne: Private sector entities ready to invest in LIAT
Ram-a-mask brought the curtain down on Crop Over Lite at McBride's
Hurricane Centre monitoring tropical wave heading west
Two Bajans and two in transit passengers test positive for COVID-19
She began studying Law but Jameela's passion led her to HR Management
New assignments in the Roman Catholic Diocese of Bridgetown
Minister: No crystal ball to see what school in September will be like 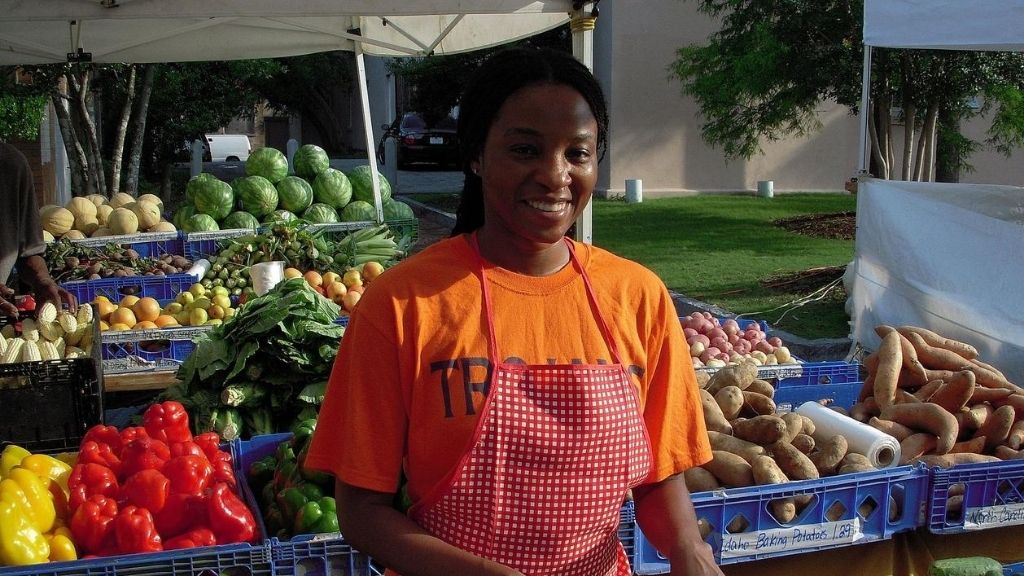 A woman at a farmer's market; Image source: United States Department of Agriculture

Canada wants to see more women in Caribbean countries educated and skilled to successfully use agriculture as a means to achieve financial security and safety.

In 2017, Global Affairs Canada launched its Feminist International Assistance Policy, laying the foundation for positioning Canada as a leader in gender equality in its aid programming.

Under this approach six interlinked areas are promoted for action and among them are environment and climate action. In keeping with this vision, Global Affairs Canada introduced the “Cooperation for Climate Change Adaptation and Resilience in the Caribbean” Initiative in 2019.

Under the “Cooperation for Climate Change Adaptation and Resilience in the Caribbean” Initiative, funds were allocated to the Food and Agriculture Organisation (FAO) of the United Nations to support CARICOM members via a pre-Investment fund for drafting proposals and negotiating climate financing with national and regional agencies for four identified gender-sensitive climate projects throughout the CARICOM region.

The four projects identified under this initiative span nine CARICOM countries, with the opportunity to improve the livelihoods of at least 155,000 agriculture workers, with specific focus on the needs, unique climate impacts and livelihoods of Caribbean women.

These projects are as follows:

REACT – This project seeks to improve the climate resilience of rural communities and small-holder farmers in Guyana’s coastal regions, with an emphasis on the unique issues faced by women. This project, if funded, would positively impact 40,000 small producers.

SASAP – The overall objective of this project is to implement the Saint Lucia Fisheries Sectoral Adaptation Strategy Action Plan, which would support Saint Lucia in its efforts to conserve and sustainably use ocean and marine resources, with urgent actions to cope with climate change under a gender sensitive lens. This project, if funded, would positively impact 10,000 fisher folk in Saint Lucia.

ADAPT – The focus of this project is to enhance the climate change resilience of vulnerable smallholders (approximately 100,000) in Central Jamaica. This project would focus on issues such as landscape resilience, agricultural production, and increased knowledge of climate-resilient agricultural practices, using an approach that addresses the unique needs of women in agriculture.

The Canadian pre-investment fund is much needed in the context of the Caribbean, given that regional climate and agriculture projects typically overlook the fact that the climate-related experiences of women in agriculture tend to be different to those of men. Women tend to be more involved in small scale agriculture and less than 20 per cent of women in Latin America and the Caribbean are landholders, which results in less access to resources such as water and capital. Women typically have reduced access to climate information than men, which means that they are typically less aware of impending extreme weather. Women also often have competing familial roles which impacts income and productivity. Women have a much greater incidence of mortality as a result of natural disasters, which is exacerbated by the fact that rural women typically have less access to healthcare than their male counterparts.

According to the Food and Agriculture Organization: "It is estimated that closing the gender gap in agriculture would raise total agricultural output in developing countries by 2.5 to 4 percent, and would reduce the number of hungry people by 12 to 17 percent globally, the equivalent of 100 to 150 million people."

Canada's Minister of Foreign Affairs, The Honourable Chrystia Freeland articulated: "We are positioning Canada at the forefront of this global effort. This is a matter of basic justice and also basic economics. We know that empowering women, overseas and here at home, makes families and countries more prosperous."