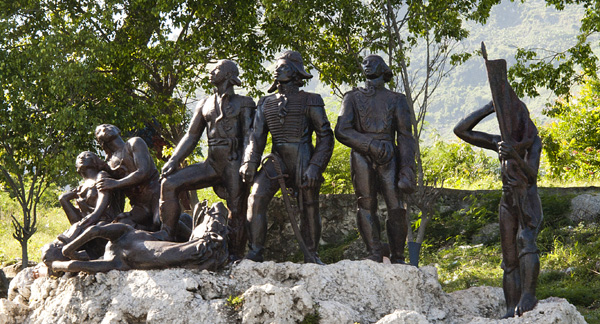 Every year on November 18 Haitians around the world celebrate the Battle of Vertières to honor the country's victory and pride.

According to reports, it was fought on November 18, 1803, between the Haitian indigenous army, and Napoleon's French expeditionary forces, who were openly committed to re-enslave the formerly enslaved people and regain control of the island. The Haitian Revolution leaders fought the expeditionary troops and the French that controlled most of the territory of St Domingue. The only places controlled by the French forces were Môle St Nicolas, held by Noailles, and Cap-Français, where, with 5,000 troops, and the French General Rochambeau was at bay.

The Battle of Vertières's goal was to take over the land formerly known as Cap-Français to turn it into Cap-Haïtien, the land belongs to Haiti, not the French. During the 21st century, on November 17, 2020, the Haitians across Haiti and across the diaspora have taken to the streets in Haiti to celebrate such victory. Remembering in 1802, the revolutionary leader Toussaint Louverture was captured by Napoleon's troops.

From the ship that would lead him to his prison cell, and eventual death, Louverture said:

“In overthrowing me, you have done no more than cut down the trunk of the tree of black liberty in St. Domingue. It will spring back from the roots, for they are numerous and deep.”

After Emperor Toussaint Louverture’s death, his friend Jean Jacques Dessalines continued the fight for liberty by leading the resistance to the French. On November 17, 2020, according to Werley Nortreus, a Haitian political leader and the founder of Vanyan Sòlda Ayiti and A New Haiti Before 2045 (ANHB 2045), he said on Bon Déjeuner! Radio that November 18 is a historic day for the Haitians and Africans, a day that Haitians celebrate the victory of the Battle of Vertières.

“The Battle of Vertières's victory honors the value and the character of my fellow Haitians and Africans brothers and sisters across the world. If my ancestors didn't fight the French and the troops, our beautiful city currently known as Cap-Haïtien wouldn't be ours. Not just Cap-Haïtien, so many other cities. Victory belongs to us,” said Werley Nortreus, a political leader and founder of Vanyan Sòlda Ayiti and A New Haiti Before 2045 (ANHB 2045).

After the death of Emperor Toussaint Louverture, his friend Jean Jacques Dessalines continued the fight for liberty by leading the resistance to the French and he won.

The battle occurred less than two months before Dessalines' proclamation of the independent Republic of Haiti on January 1, 1804.

Haitian native celebrates love in land of his birth