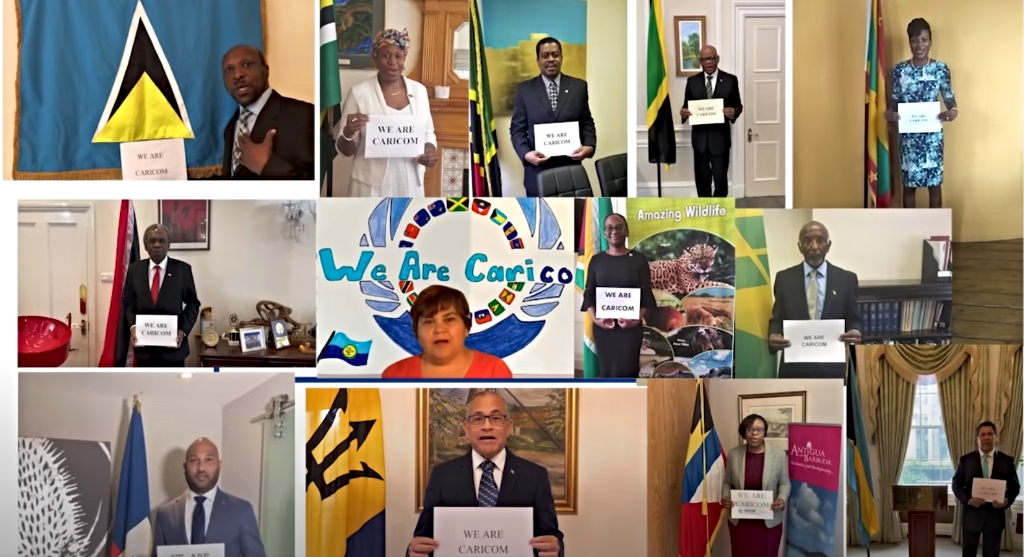 One message was shared "We are CARICOM"

With the United Kingdom slowly reopening post-COVID-19, history was made today as CARICOM marked a new milestone stepping into the technological age with the first special virtual session of the Heads of Mission in the UK.

CARICOM Day, July 4, achieved this first, as the Caribbean Community’s Heads of Mission in the United Kingdom came together to celebrate the achievements of the region with a number of messages, in a special virtual session under the theme “We are CARICOM, Resilient and Diverse”.

Featuring addresses by Heads of Missions in the United Kingdom, CARICOM Secretary-General, Ambassador Irwin LaRocque, Commonwealth Secretary-General Baroness Patricia Scotland, those in the diaspora, and poetry, it was live-streamed to a global audience from London at 10.30 am British Summer Time (5.30 am local time).

In his message, outgoing Chairman of the Caribbean Caucus of Heads of Missions and Barbados’ High Commissioner to London, Milton Inniss, reflected on the devastating effects of the COVID-19 pandemic on Caribbean communities, which he described as a “dark time in our history”, causing socio-economic fallout and becoming an acute burden on the Caribbean’s health systems.

Commending the regional leaders for remaining “resolute and steadfast” in the face of such a crisis, he said:

“We must commend the unrelenting spirit of our Caribbean Community and those of the Caribbean diaspora who worked unstintingly on the frontlines to protect, comfort and care for those who need it most. The brave who continue to fight against marginalization and social disparity and champion the need for equality, irrespective of nationality, social class or creed.”

Also pointing to the uniqueness, diversity and strength of the Caribbean people, incoming CARICOM Caucus Heads of Missions Chairman, and St Vincent and the

Grenadines’ High Commissioner to London, Cenio Lewis, declared that the region had also continued to distinguish itself as a “strong advocate for the interests of small island developing states”.

He maintained that CARICOM Day was a way to celebrate the progress of Caribbean people in “achieving shared goals”, and to renew a focus on the work to be done. He also saw it as an annual opportunity for Caribbean nationals at home and in the diaspora to celebrate their regional unity and identity.

Citing the historic elevation of St Vincent and the Grenadines to the non-permanent seat on the UN Security Council as another prime example of the region being able “to punch above its weight in the international community”, he conceded that such achievements were in contrast to the devastation of hurricanes in the region, the existential threat of climate change and being excluded from critical developmental assistance from international partners.

Meanwhile, in his address, CARICOM Secretary-General, Ambassador Irwin LaRocque, pointed out that the region had made strides in improving the lives of its people, within the four pillars of our integration movement - economic integration, human and social development, foreign policy coordination and security cooperation, adding that CARICOM’s membership had become more diverse with the addition of Dutch and Francophone members.

“The institutional architecture that we have built to help implement the policies and programmes agreed to by our Heads of Government to enhance the well-being of the people of the community has served us well.”

Daughter of the soil and Commonwealth Secretary-General, Baroness Patricia Scotland, noted that as CARICOM celebrated 47 years of existence, the region needed to “plan and act together to protect the common good and the well-being of all”, pledging that the commonwealth would continue its efforts at “mobilising awareness and assistance during this time of heightened need, in terms of healthcare, finance, education, and trade” and would help to “amplify the voice of the Caribbean”.

It has been universally agreed that although the region has been severely affected by COVID-19, yet it was the resilience of its leaders and people in the wake of this unprecedented force of nature that has allowed the world to see the Caribbean as a place of great intellectual fortitude and determination.

When all is said and done, the future remains bright for the region. Of course, there are still battles to be fought in the global arena, but lest we forget: “We are CARICOM, Resilient and Diverse”.