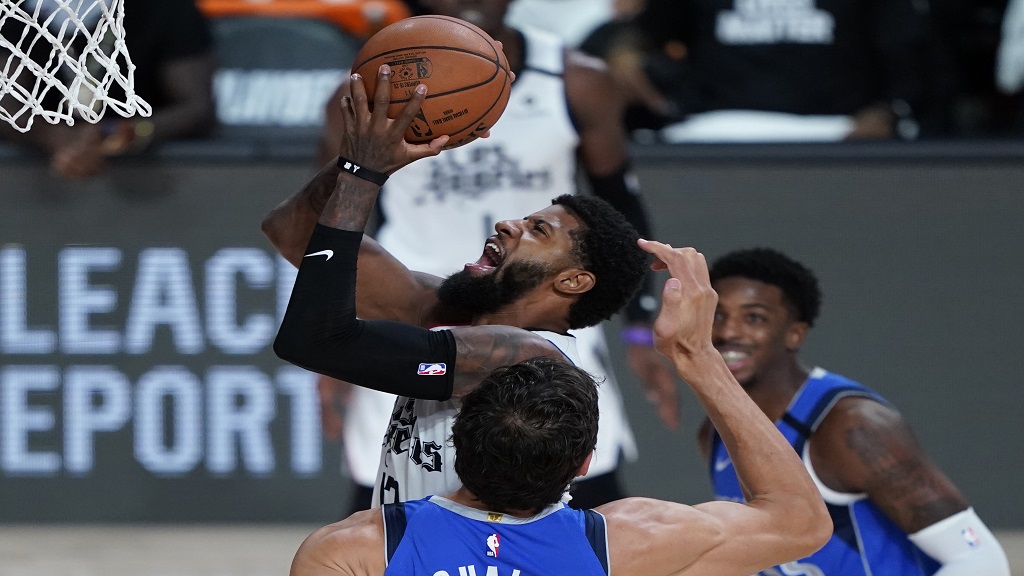 Kawhi Leonard and Paul George starred as the Los Angeles Clippers routed the Dallas Mavericks 154-111 in Game 5 of their Western Conference first-round matchup.

Leonard and George combined for 67 points to help the red-hot Clippers claim a 3-2 lead in the NBA playoffs on Tuesday.

George has struggled in the series, but the All-Star was back to his best with 35 points on 12-of-18 shooting from the floor and four-of-eight from beyond the arc in Orlando, Florida.

Leonard posted 32 points and seven rebounds as the Clippers moved within a win of advancing to the second round of the playoffs at Walt Disney World Resort.

Per STATS, the Clippers became the first team in NBA playoff history to score 35-plus points in all four quarters of a game.

Luka Doncic overcame an ankle problem to help level the series for the Mavericks in Game 4, however, the reigning Rookie of the Year was unable to inspire Dallas again.

After a triple-double last time out, Doncic finished with 22 points and eight rebounds in the absence of star team-mate Kristaps Porzingis.

Game 6 between the Clippers and Mavericks is on Thursday.

The Denver Nuggets, meanwhile, stayed alive in their Western Conference series after defeating the Utah Jazz 117-107.

Jamal Murray was the hero for the Nuggets, scoring 33 of his 42 points in the second half as Denver reduced Utah's series lead to 3-2.

Game 6 is on Thursday.

The Los Angeles Lakers can clinch their Western Conference series against the Damian Lillard-less Portland Trail Blazers on Wednesday. Lillard has been ruled out with a knee sprain. The Milwaukee Bucks can also seal a 4-1 series win in the east when they take on the Orlando Magic midweek.