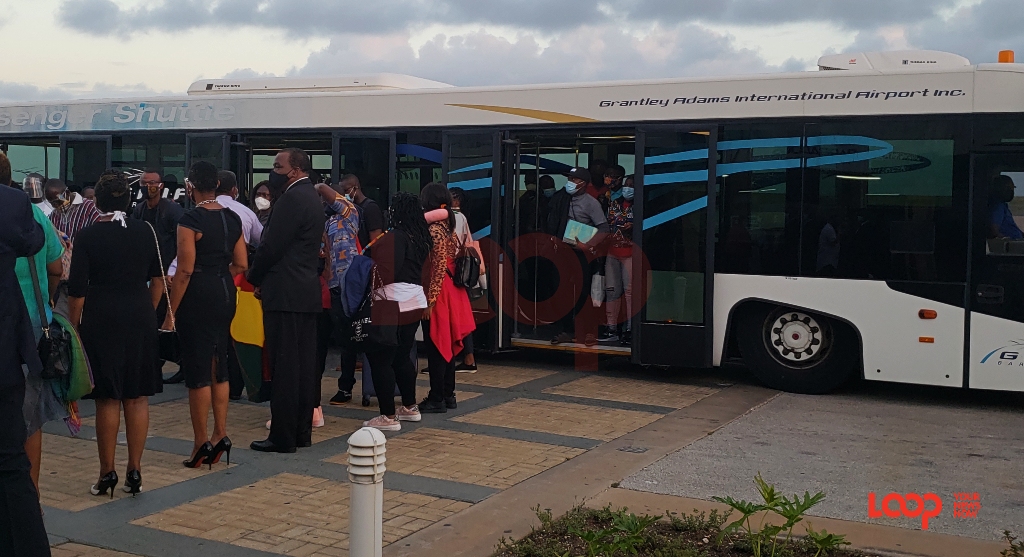 Ghanaians arriving in Barbados on July 30.

A total of at least seven media personnel from the five media houses which operate on island are being advised to "separate" themselves from others.

After covering the arrival and welcome ceremony held at Grantley Adams International Airpot for the 95 nurses from Ghana, journalists, videographers, photographers, cameramen and information officers are being told to stay away from their offices, after nine of the foreign nurses have tested positive for COVID-19.

"I have advised the Minister and the persons who attended that function that out of an abundance of caution that they separate themselves from their workplaces and I would suggest that we do this for persons who were in the immediate proximity to those individuals.

After the two and a quarter bus loads of Ghanaians were brought from the Azores Airlines vessel up to the Departure Lounge, it took about 30 minutes for them all to disembark, do their chant, get their hands sanitised and proceed through thermal scanning to be processed.

The 15 to 20 minute-long ceremony which followed the receiving of the nurses had addresses from the Tourism Minister Senator Lisa Cummins, Health and Wellness Minister Lt Col Jeffrey Bostic and one Ghanaian Nursing Officer Lorraine Atopley.

Barbados' total number of confirmed COVID-19 cases as of August 1 stands at 122 with 17 cases being active. Between Thursday, July 30 and Saturday,August 1, five females and seven males tested positive. Meanwhile, two persons were discharged from the facility having recovered from the illness.

Delivering the news of the new cases, Dr George added:

"At the same time, I am happy to report that two more people will leave the isolation facility at Harrison’s Point today after recovering from COVID-19. Recall that persons leaving the isolation facility will have two consecutive negative tests. This brings the total number of persons who have recovered to 98, while 17 persons remain in isolation.

"The Best dos Santos Laboratory should be complimented, for in the short pace of five months, we have been able to do 11, 288 tests on persons coming into Barbados, Barbadian citizens with any respiratory symptoms and persons who need further investigation."

UPDATE: 48 per cent of Ghanaian nurses in Barbados are men