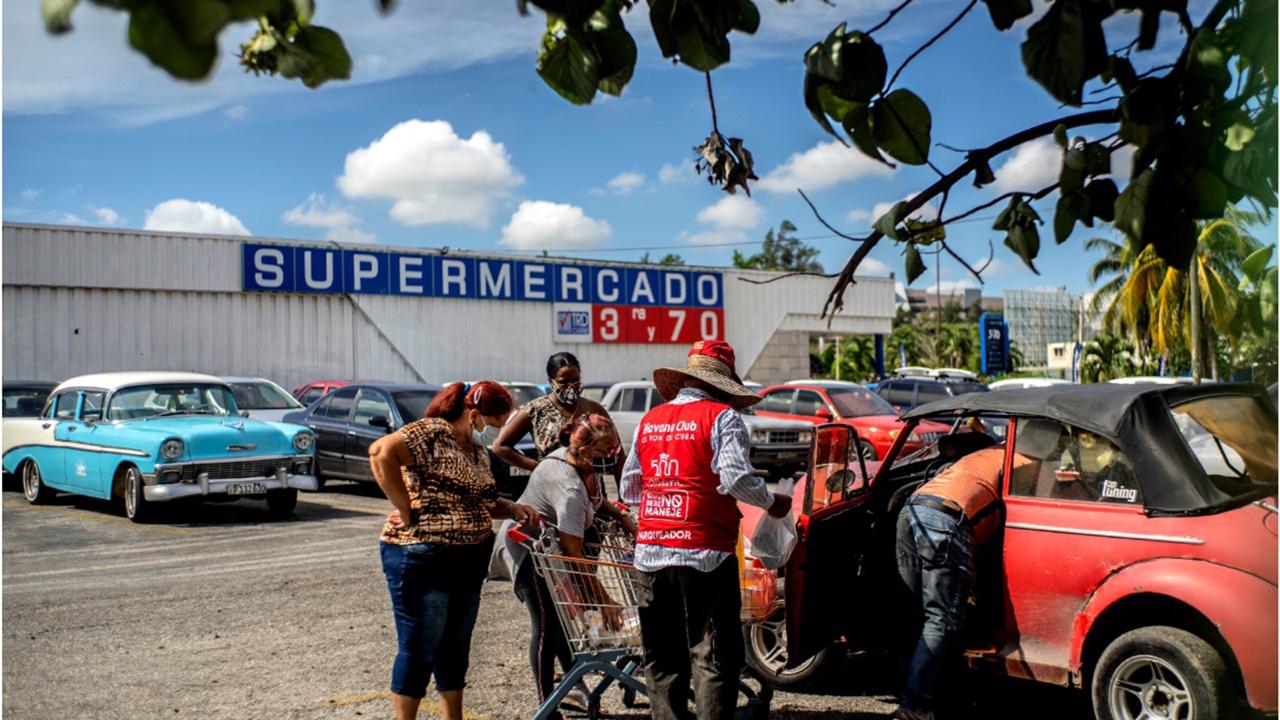 Shoppers wearing protective facemasks amid the spread of the new coronavirus load groceries from a dollar store in Havana, Cuba, Monday, July 20, 2020. Cuba has expanded the types of stores that accept dollars for payment to include food stores, as part of the government’s effort to capture much needed hard currency to shore up the island’s ailing economy. (AP Photo/Ramon Espinosa)

Cuba opened shops Monday (July 20) that accept only foreign currencies and eliminated a special tax on the US dollar, deepening a process of collecting stronger currencies to face the country's economic crisis.

By morning, long queues had formed in a half-dozen such shops in Havana dedicated to the sale of food and toiletries. Under the new system, people buy merchandise using national or foreign cards backed by hard currencies, especially dollars, including Visa or Mastercards. Cash is not accepted.

“It looks to me like at this critical time, when the country is going without food, there is everything" in the market, said Lenon Fernández, a 32-year-old entrepreneur who went shopping at a supermarket known as 70.

The shortages have worsened since the middle of last year when the Trump administration tightened sanctions to pressure for a change in the island's political model.

Now, on top of sanctions, a cut in remittances from abroad and internal inefficiencies, Cuba is losing tourist revenues because of the coronavirus disease 2019 (COVID-19) pandemic and its GDP growth is close to 0%. The result has been long lines and exasperation due to the lack of food.

The new stores in the capital and other Cuban cities add to a dollarization process of retail trade that began in late 2019, when shops were opened under the modality of foreign currency sales for household appliances.

The effect was an increase in the value of the dollar on the black market.

Before then, any transactions in currencies other than those issued by Cuba was prohibited since 2004, when the dollar was withdrawn.

This new form of sale in foreign currencies for food and cleaning goods was announced last week by President Miguel Díaz-Canel as a way of obtaining income and providing goods to the population.

The measure reflects the reality on the communist-run island of social sectors with money and dollars to spend - such as entrepreneurs, relatives who receive remittances, employees of foreign companies, etc. - and those who do not.

The government said it will keep stores in convertible pesos or CUC – almost equal to the dollar - and in Cuban pesos (24 for a CUC), which are the other two currencies circulating on the island.

It will also continue to support monthly quotas of basic foods such as rice, beans, some chicken or meat, milk, coffee and sugar.

“In the midst of an economic crisis of very uncertain scope and duration, the Diaz-Canel administration is using the political credit of its successful management of the pandemic to implement economic reforms postponed for more than a decade,” said Cuban economist Arturo López-Levy, professor at Holy Names University in California.

Cuba has managed to control the spread of the new coronavirus. In four months, authorities say it infected 2,446 people. But they reported no new confirmed cases on Monday.

In general, Cuban authorities have resist changes - despite a timid process initiated by former President Raúl Castro in 2010 - claiming they want to limit the negative effects of inequality and not hurt vulnerable sectors.

The elimination of a 10% tax on the use of the U.S. dollar, in force since 2004, went into effect Monday. When anyone exchanged 10 dollars for CUC in the local market, they only received nine CUC.