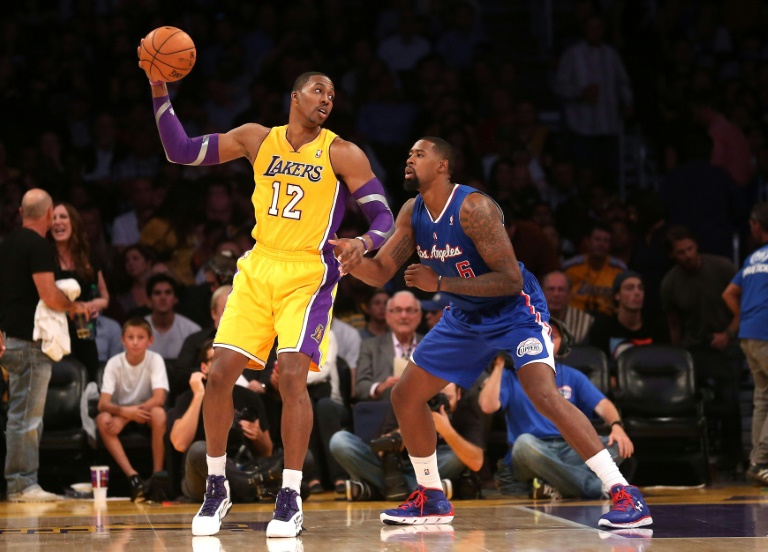 Dwight Howard in action for the Los Angeles Lakers.

Dwight Howard has agreed to join the Philadelphia 76ers on a one-year deal after celebrating an NBA championship with the Los Angeles Lakers.

Howard's agent Charles Briscoe confirmed the free agency move to ESPN on Friday – the eight-time All-Star teaming up with Joel Embiid and Ben Simmons in Philadelphia.

Veteran centre Howard was a free agent following the 2019-20 season, having signed a one-year contract in Los Angeles, where he helped the Lakers to their first title since 2010.

It appeared Howard was heading back to LeBron James' Lakers on Friday when he tweeted – and later deleted – a Twitter post, which read: "I'm staying right where I belong. Laker nation I love y'all. Purple and gold never gets old."

Later, speculation of Howard's switch to the 76ers emerged – the 34-year-old's deal reportedly for the veterans minimum exception of $2.6million.

Howard will reunite with former general manager Daryl Morey in Philadelphia after the pair worked together at the Houston Rockets between 2013 and 2016.

Morey has made moves as president of basketball operations in Philadelphia, dealing Al Horford and draft picks to the Oklahoma City Thunder for three-time champion and Howard's former Lakers team-mate Danny Green and Terrance Ferguson.

The 76ers – swept in the first round of last season's playoffs, prompting Doc Rivers' arrival – also acquired Seth Curry from the Dallas Mavericks for Josh Richardson and pick 36.

In his second stint with the Lakers, Howard averaged 7.5 points and 7.3 rebounds per game as the storied franchise ended their decade-long drought.

Howard made a significant contribution upon his return following his disappointing first spell in 2012-13 – he and JaVale McGee becoming the first pair of NBA team-mates to each have 75-plus blocks while shooting 60.0-plus percent from the field in the same regular season since blocks became an official stat in 1973-74.

With Howard departing, the Lakers have turned to Los Angeles Clippers star and Sixth Man of the Year Montrezl Harrell.

The 26-year-old averaged 18.6 points, 7.1 rebounds and 1.7 assists per game as the Clippers sensationally squandered a 3-1 series lead to the Denver Nuggets in the Western Conference semi-finals.