Skip to main content
Breaking News |
Lord Nelson gets his walking papers! Close to $20,000 to move soon
VIDEO: Man dead, daughter missing after landslide in Jamaica
Minister not excusing quarantine breachers; COVID-19 tracker next
Loop Weather Update: Barbados Met Office issues small craft advisory
Where did the Harrison's Cave bids from local companies fall down?
Adulthood MIMS - 10 items that should be FREE for all adults!
Coronavirus cases in the Caribbean as of October 23 at 10am: 231,209
New Fenty Beauty highlight! Rihanna's brand up for 2020 Streamy Award
Trump posts unedited '60 Minutes' interview before it airs
TT Officials: 'Minimal' risk of oil spill from Nabarima

Experts project another major hurricane and four storms in the region 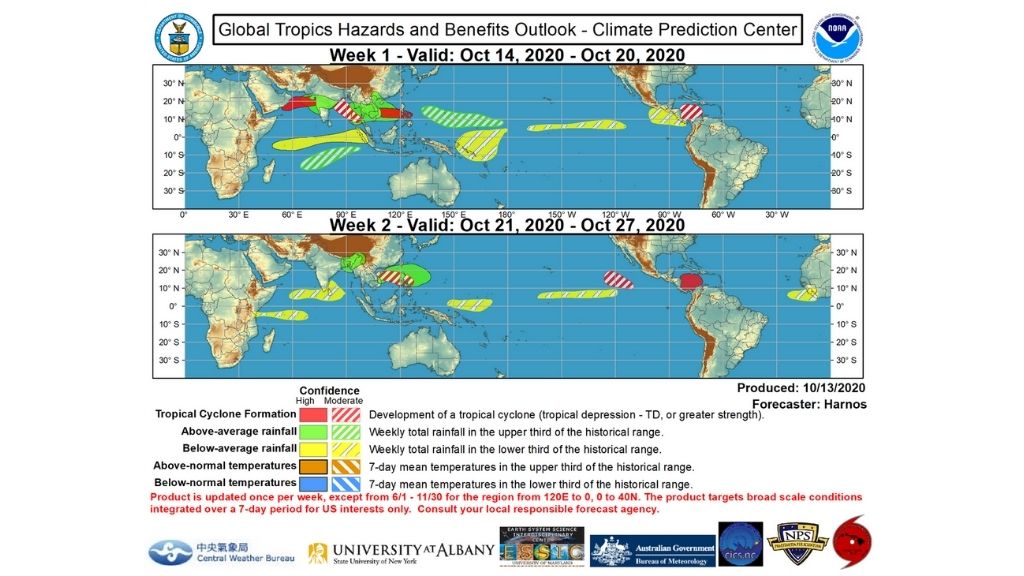 With a month and a half left, the 2020 Atlantic hurricane season has already been record-setting with 25 named storms, nine hurricanes and three major hurricanes.

What do experts think is next?

US National Hurricane Center (NHC) climatology shows the frequency of tropical storms and hurricanes drops off significantly in November after a small secondary spike in middle and late October.

Map showing where Atlantic named storms have formed over the next two weeks (Oct. 14-27) during the satellite era (since 1966). All major #hurricanes have formed in the central or western Caribbean. pic.twitter.com/xZkBgb4JH7

According to the latest weekly “Global Tropics Hazards and Benefits Outlook” issued by the Climate Prediction Center (CPC), there is “high” confidence in a tropical cyclone forming in the western Caribbean later this month -- namely, October 21-27.

That same area was already being highlighted in the outlook that was issued back on October 6th, suggesting that forecast models, forecast parameters and climate variables are -- and have been -- in good to great agreement on a tropical cyclone developing.

The CPC’s discussion says, “This TC could be the fourth major hurricane of the Atlantic season given a broadly favorable environment and ample oceanic heat content.”

On average, only two named storms form between mid-October and the end of the season on November 30. But this season has been anything but average, with more than twice the amount of named storms we typically see.

To better predict the future we often look to the past, and the only analog year for this many tropical storms and hurricanes is the Atlantic season of 2005, which brought 27 named storms in total.

As of this writing, the 2020 hurricane season is running five storms ahead of 2005’s pace, having already used the name Hurricane Delta, whereas in mid-October 2005 we were only on Hurricane Vince. The remaining seven storms that 2005 brought after today’s date formed between October 15 – December 28, when we ended on Tropical Storm Zeta.

The Caribbean Sea still has plenty of heat in it, and this is indeed the favored area for storm formation late in the season.

Experts suggest that that there are four named storms left this hurricane season, ending on Tropical Storm Theta, an all-time record 29th named storm of the season. The possibility of a major hurricane at the end of the month is particularly high.