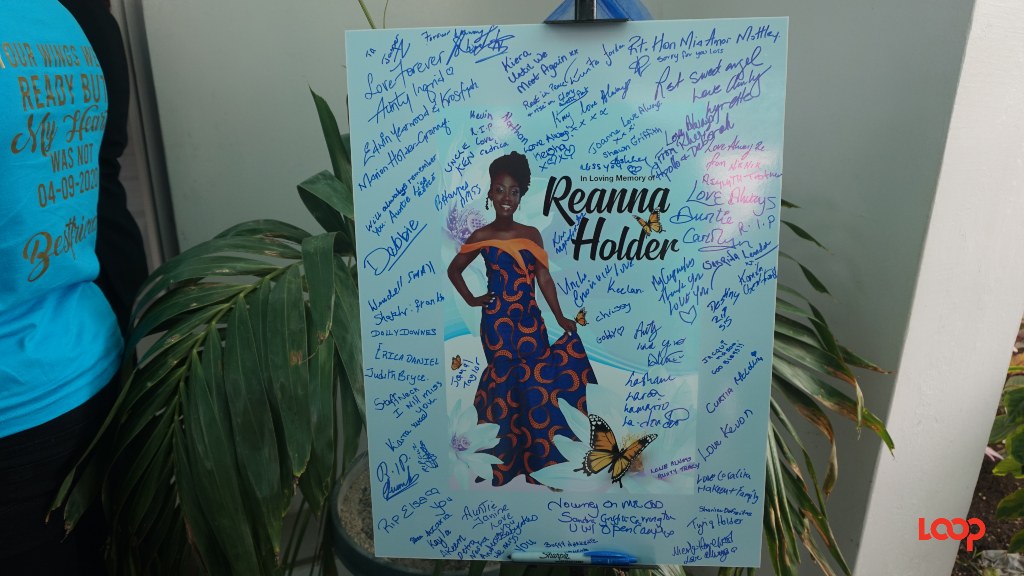 'Your wings were ready but my heart was not'.

That was the golden script on the back of the shirt worn by Reanna Holder's best friend at Reanna's funeral service yesterday.

The card to be signed by attendees was full of loving messages. 'Love Always' and 'Love Forever', read a few. One aunt wrote, 'Rest Sweet Angel', while someone else scribbled, 'I will miss you'. One person wrote, 'I will always remember you' and another wrote in even strokes — 'Journey On'.

Eighteen-year-old Reanna passed away suddenly on September 4, while visiting with her father in Canada. The death of the young athlete, which drew national attention, plunged family and friends into mourning.

Yesterday, the Chapel at the Coral Ridge Memorial Gardens in Christ Church was full to capacity with few standing. Many family members wore blue. Dotted throughout the congregation were blue shirts with photo inscribed with the words 'Princess Reanna' and 'Always in our hearts'.

At 1 pm, heartfelt tributes and solemn goodbyes filled the Chapel and Gardens as mourners said their final farewells to Reanna.

In a loving eulogy, her father Ryan Holder offered comfort to those in attendance. He said that Reanna will be remembered as a loving daughter, sister, family member, and friend to many.

A special tribute was done by Entertainer Edwin Yearwood. He sang Moving On in dedication to Reanna.

On exiting the chapel, there was a Guard of Honour made up of the St George Secondary Athletics Team, which Reanna captained.

Reanna's body was returned to the island for burial, thanks to the outpouring of support through a GoFundMe account set up to help cover the exorbitant costs associated with bringing her home.