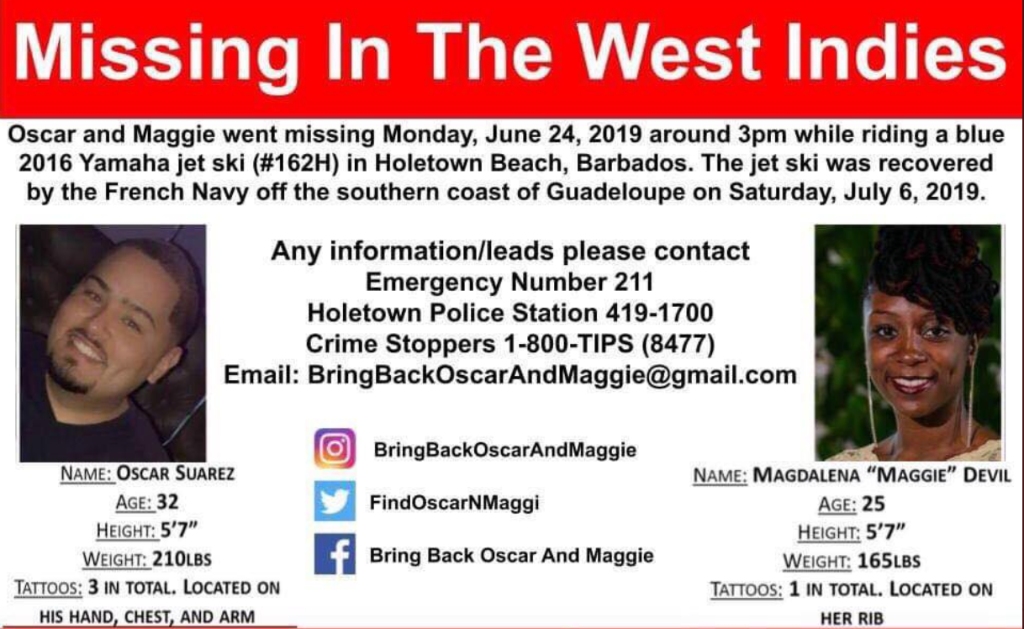 The family of the American couple from New Jersey who went missing off Barbados on June 24, 2019, say that they are awaiting a highly demanded and promised meeting with government authorities in Barbados one year later.

Having not given hope of finding Oscar Suarez and Magdalena Devil who were last seen off Barbados' West coast on a jetski, the relatives of the two said on Instagram that they are to be updated soon on the matter.

"Tomorrow is one year since Oscar and Magdalena went missing from Barbados. It hurts deep.
We are still awaiting a promised meeting from representatives from the office of Prime Minister @mamottley and the @gisbarbados authorities. We’ve been waiting since February. However, we received a promise today that they would meet with our families via Zoom in early July as they are coordinating their schedules."

Suarez was 32 and Devil 25 at the time they went missing. Devil had recently celebrated a birthday. The jetski that they rode was found adrift at sea off Guadeloupe days later but there was no sign of the two.

On Instagram family members remembered Suarez who was a father of two. He had a 10-year-old son and five-year-old daughter. On Father's Day 2020, members of his family wore shirts with his image on them and his sister wrote "We miss you so much @senor_suarez!" on her Instagram page. Friends and family also wrote that he has missed his children's two birthdays during this past year and they grieved afresh as fathers were celebrated globally.

As they look forward to this aforementioned meeting, the BringOscarandMaggie page also called on persons to remember both Oscar and Magdalena around this one-year anniversary time by sharing "a favorite memory/photo/funny story of them on your timelines? Be sure to tag us so we can share as well."

And the account added: "Thank you for the love, prayers, and support for our families. We still need it and we appreciate each and every one of you."

"Today, I woke up with so much heartache. 💔😔 A year ago, you went missing. No answers, no leads. Just Missing... This is the stuff you see on TV and never think it can happen to you and your family. But it did! A constant nightmare full of unanswered questions... We miss you SO much Oscar!!! You were never just my cousin- you're my brother! We promised to raise our girls like we were raised- together always! ❤ Eviana asks for her Tio all the time and I don't know what to tell her.😔 I pray for you and Maggie every single day... I pray for Tia and your babies all the time. We love you! We miss you! ❤❤❤ #bringbackoscarandmaggie"

"Wow 1 year already, and still can’t believe or understand it.. 😥 the first pic was a regular thing, random bbq’s just because ur felt like it. Hope is still not lost and I know wherever u maybe I know there’s nothing but laughter and jokes going around. #bringoscarandmaggiehome ❤️🙏🏽 #missyouhomie"

And Anais's shared a post from Lady_Nala on Facebook on the Bring Back Oscar And Maggie page: 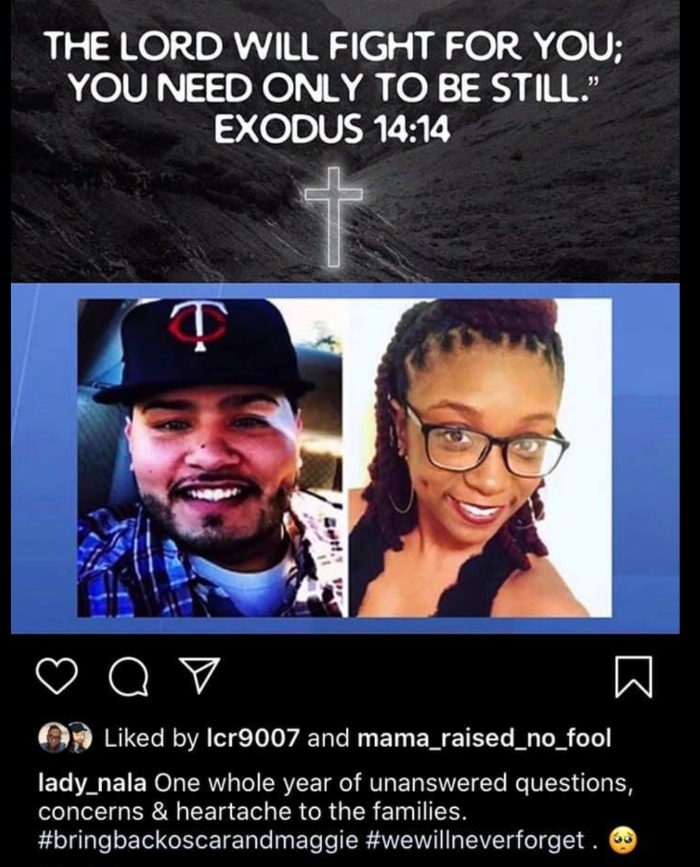