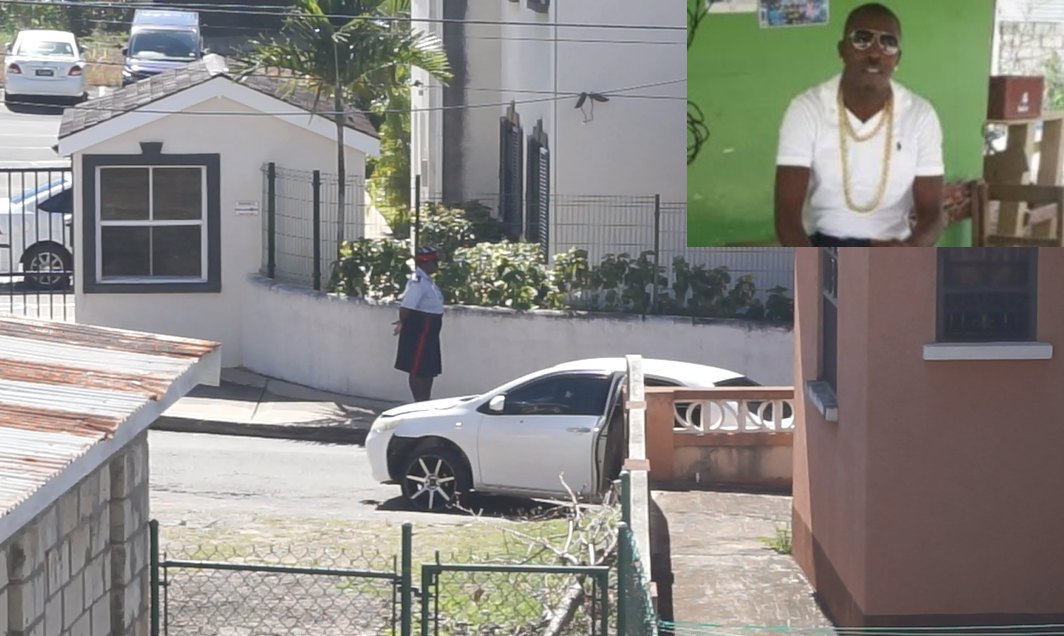 The car driven by the deceased. (Inset: Marlon Holder)

The usual morning activities at the St Alban's Primary School were disrupted after a gunman opened fire, killing a parent.

According to police reports, a 38-year-old male was shot and killed yards away from the entrance of the Weston, St James School while he was dropping his son off today, January 16, 2020.

The victim has been identified by family as Marlon Holder, a resident of Marley Vale St Philip.

Loop News understands a gunman fired shots toward the deceased while he was sitting in the driver's seat of the car. There was also a female in the front passenger seat and two small children in the back seat- one of which was Holder's six-year-old son.

Holder reportedly ran from the vehicle and collapsed in the gap. He died at the scene.

Relatives, friends and onlookers were at the scene recapping the morning's brazen daylight shooting and awaiting updates from police.

Father of the deceased, Emerald Holder, said he was informed his son had been involved in a shooting incident and only knew he had succumbed to the gunshot injuries when he arrived at the scene.

He told reporters he had raised Marlon from a baby to age 16 and his sudden death in this violent manner has hit him hard.

"This is a funny feeling and I must confess that as President of the Young Men's Christian Association [YMCA], where gun violence is one of our challenges, to find that I am faced with the same challenge that we as an organization is trying to curtail ... this is not an easy feeling. The last time I heard from him was two days ago when we were on WhatsApp talking, me and his son."

The older Holder said he was clueless as to why someone would take his son's life.

"I can only tell you what I heard, I don't even know if the information is correct. I am told that he got robbed and got shot with his son and another kid in the car and another lady as well. I am a little concerned that these things are happening in Barbados."

Mother of the deceased, Myrtle Skeete told reporters she believed there were many who were jealous of her son and this was the reason why he was attacked.

A friend of the deceased, who requested anonymity, said Holder's death will not only affect his immediate family but also the residents of Marley Vale. The friend said Holder was loved by everyone in the neighbourhood.

Ministry officials spent most of the day at the school in meetings with the Principal and staff. The school is set to remain closed tomorrow.