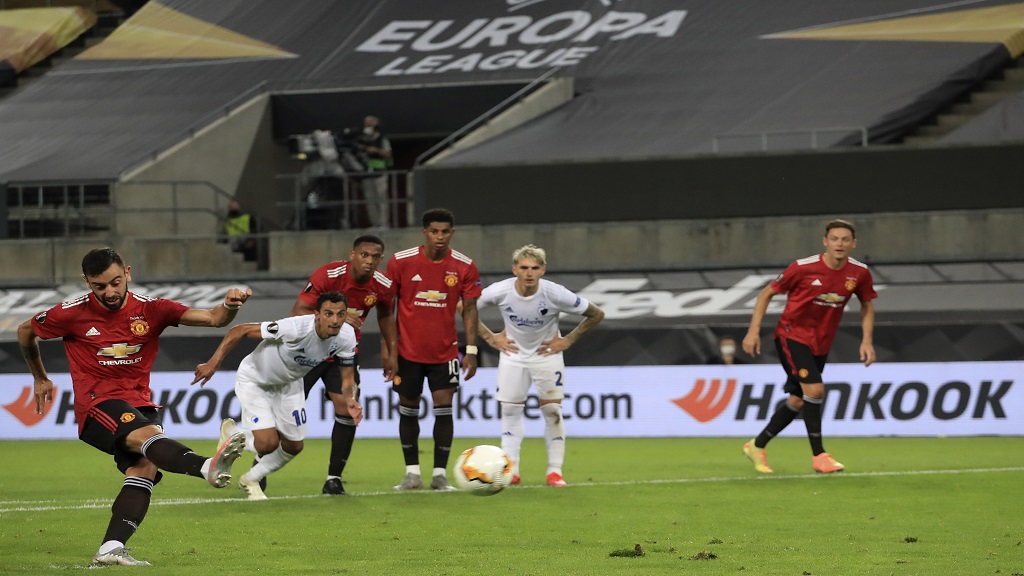 Manchester United needed an extra-time penalty from Bruno Fernandes to scrape into the Europa League semifinals after beating Copenhagen 1-0 on Monday.

In sweltering heat, United's young team controlled the lion's share of possession but had a hard time creating clear chances until Andreas Bjelland brought down Anthony Martial in the penalty area. Fernandes blasted the ball past the otherwise excellent goalkeeper Karl-Johan Johnsson to give United the 95th-minute lead.

Once again a Europa League game against a team from a smaller league with limited finances was tighter than expected, five days after LASK Linz restricted United to a 2-1 win at Old Trafford.

“Their keeper had probably the game of his life, he was really good, but then again I could say we need to be more clinical in knockout games," United manager Ole Gunnar Solskjaer said.

United recorded 14 shots on target while Mason Greenwood and Fernandes hit the woodwork with shots during normal time and earlier video reviews cost United two of its best opportunities to score.

First, VAR scratched off a United penalty for offside in the buildup. Just before the break Greenwood put the ball in the net after a lightning break down the right flank but the replay showed he'd been just offside when Marcus Rashford's pass was played.

That decision was a particular blow for United after the apparent breakthrough goal came just as the English team had seemed to be getting frustrated and taking increasingly speculative shots against a Danish team playing its first ever European quarterfinal.

Copenhagen striker Mohamed Daramy muscled his way past the United defense to shoot in the 17th but had his shot blocked by Harry Maguire, and Jens Stage's follow-up was blocked, too. Copenhagen had other chances blocked or sent wide in the second half.

For United manager Solskjaer, the game was a reunion with his old Norway teammate and friend Stale Solbakken, the coach of Copenhagen.

Solbakken was vocal on the touchline, screaming his team forward in extra time. During the earlier drinks breaks he was heard to tell his players that “we have been the better side," which was true for much of the 90 minutes. Despite creating some scoring chances in promising positions, though, Copenhagen didn't register a single shot on target.

“We should maybe be a little more cynical. We didn't go down when we had chances to go down ... inside the box,” Solbakken said. He drew a contrast with the penalty Martial won in extra time, but said he didn't necessarily disagree with the referee's decision.

United plays five-time Europa League winner Sevilla or English club Wolverhampton on Sunday in the semifinals. They play their quarterfinal on Tuesday.

Until the semifinal on Sunday, United will be staying within the UEFA “bubble” in western Germany.

Solskjaer said that meant conditions wouldn't be optimal for recovery, compared to being in Manchester, and he wouldn't be allowed to visit the Sevilla-Wolverhampton game. “We just have to make the most out of a difficult situation in conditions which are really hot, humid,” he said.