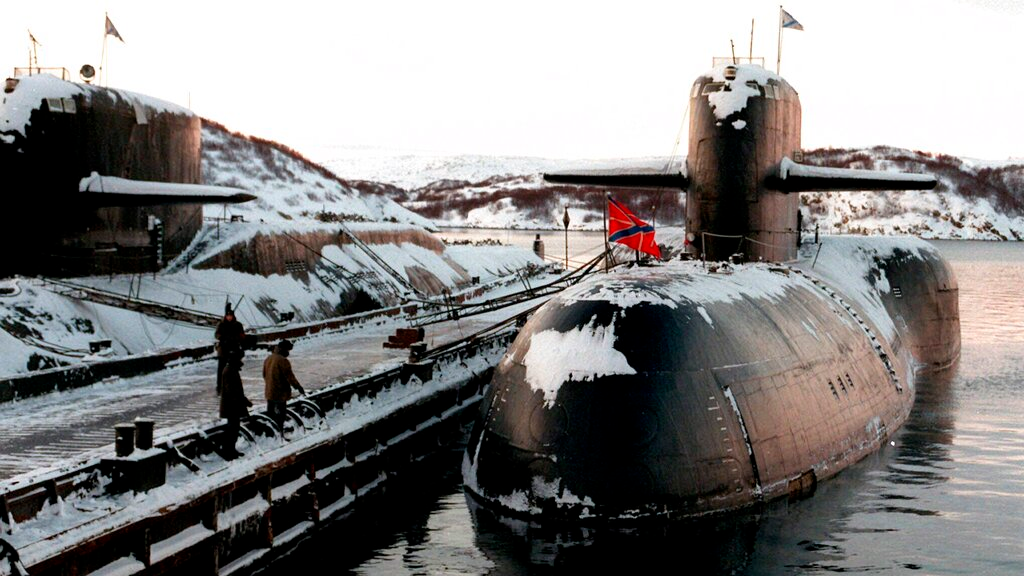 In this file photo taken on Thursday, Jan. 1, 1998, Decommissioned Russian nuclear submarines are shown in their Arctic base of Severomorsk, the Kola Peninsula, Russia. The Russian military says that a fire on one of its deep-sea submersibles has killed 14 sailors. The Defense Ministry says that the blaze erupted Monday while the vessel was performing tests in Russia's territorial waters. (AP Photo)

A fire on one of the Russian navy's deep-sea submersibles killed 14 sailors, the Russian Defense Ministry said Tuesday without giving the cause of the blaze or saying if there were survivors.

The ministry didn't name the vessel that caught fire Monday, but Russian media reported it was Russia's most secret submarine, a nuclear-powered vessel designed for sensitive missions at great ocean depths.

Russian President Vladimir Putin cancelled a scheduled appearance and summoned his defence minister to get briefed on the situation.

The Defense Ministry said in a statement that the fire broke out while the submersible was measuring sea depths in Russia's territorial waters and the vessel had since arrived at the Arctic port of Severomorsk, the main base of Russia's Northern Fleet. An investigation was underway, it said.

The ministry said the fire was put out thanks to the self-sacrifice of crew members but didn't say what is thought to have started it. It didn't say how many people were on board the submersible or if there were sailors who survived the fire.

The ministry's statement said the submersible is intended for studying the seabed but didn't give its name or type. Russia's RBC online news outlet reported it was the nuclear-powered AS-12 Losharik.

The Losharik, which entered service in 2010, is the most advanced and most obscure Russian submarine. It's named after a Soviet-era cartoon character, a toy horse made of small spheres.

The name is apparently explained by the unique design of its internal hull, which is made of several titanium spheres capable of withstanding high pressure at great depths.

In 2012, the Losharik was involved in research intended to prove Russia's claim on the vast Arctic seabed. It collected samples from the depth of 2,500 meters (8,202 feet), according to official statements at the time. Regular submarines can typically dive to depths of up to 600 meters (2,000 feet).

Some observers speculated the Losharik was even capable of going as deep as 6,000 meters (19,685 feet), but the claims couldn't be independently confirmed. Analysts suggested that one of its possible missions could be disrupting communication cables on the ocean bed.

The Losharik is carried under the hull of a mother submarine, the nuclear-powered Orenburg.

Russian news reports said that while the Losharik officially belongs to the Northern Fleet, it answers directly to the Defense Ministry's Department for Deep-Sea Research, reflecting the high sensitivity of its missions.

The Russian navy also uses Priz-class and Bester-class deep-water vehicles, which have a hull built of titanium and are capable of operating at a depth of 1,000 meters (3,281 feet). The small vehicles have a crew of two and are primarily intended for rescuing submariners in case of incidents. Such vessels are transported to the area of operation by a carrier vessel and can operate autonomously for up to 120 hours.

The blaze marks the most serious Russian naval incident since 2008 when 20 died when a firefighting system was accidentally initiated while the Nerpa nuclear-powered submarine of Russia's Pacific Fleet was undergoing trials.

In the deadliest naval incident in post-Soviet Russia, the Kursk nuclear submarine exploded and sank on Aug. 12, 2000, during naval manoeuvres in the Barents Sea, killing all 118 crewmembers.

Pompeo going to Russia amid disputes over Venezuela, Arctic