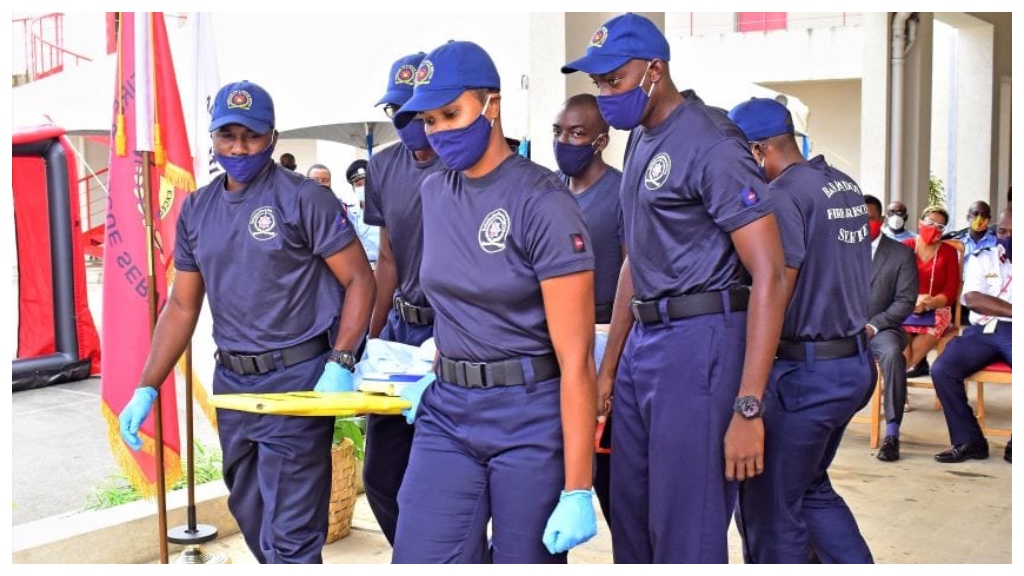 The  Barbados Fire Service (BFS) is boosting its capacity to provide pre-hospital medical care to the public during emergencies.

The emergency response agency is seeking to increase its complement of Emergency Medical Technicians (EMTs) and outfit fire appliances with computers and GPS systems.

This was disclosed during the donation of five automated emergency defibrillators (AEDs) to the BFS from Sagicor Life at the Arch Hall Fire Station on Wednesday.

Minister of Home Affairs, Information and Public Affairs, Wilfred Abrahams, said the BFS already had trained EMTs on staff, with an additional 16 expected to complete their training through the Barbados Community College (BCC) and Emergency Ambulance Service (EAS) within another six weeks.

He added that it was further anticipated that another 10 officers will commence training early next year.

“The plan is to initially have over 50 EMTs in the department and also to have every fire officer trained in CPR and the use of the AEDs,” the Minister disclosed.

Meanwhile, Chief Fire Officer, Errol Maynard, noted that while fire-related incidents were the BFS’ primary focus, the department had positioned itself to respond to search and rescue incidents of all sorts, inclusive of inland water rescue.

He added that the donation of the defibrillators by Sagicor Life helped to increase the BFS’ response to pre-hospital medical incidents, as it sought to augment the EAS in their quest to provide service to the public.

Maynard further noted that the department was also in the process of finalising a Memorandum of Understanding with the Queen Elizabeth Hospital to formalise a training and re-training programme to ensure that the highest standard of care is maintained.

“We have also been working with the Heart and Stroke Foundation of Barbados to acquire and maintain our CPR and AED training skills,” he said.

Meanwhile, he explained that the planned pilot programme to install computers and GPS equipment on fire appliances was designed to enhance the agency’s ability to dispatch the closest vehicle to an incident which may include medical emergencies.

“This will mimic the traditional 911 system, while we await the implementation of such. It will also allow us to complete reports and access data while in the field,” Maynard explained.

The Fire Chief also disclosed that discussions were currently ongoing with the BCC to develop a Dispatcher Training Programme, for the beginning of next year.

He maintained that it was a “waste of resources” to have a highly trained fire officer constrained to a Control Room or Dispatch Centre performing dispatching duties.

He added that representation was made to the Ministry of the Public Service to have civilian dispatchers appointed to the BFS, where they would work dispatch for the fire and ambulance service.

Maynard contended that the BFS was in the process of diversifying its product and service to the public for a while, but its efforts were accelerated as a result of COVID-19.

Barbados records a significant drop in fires in 2020 over 2019